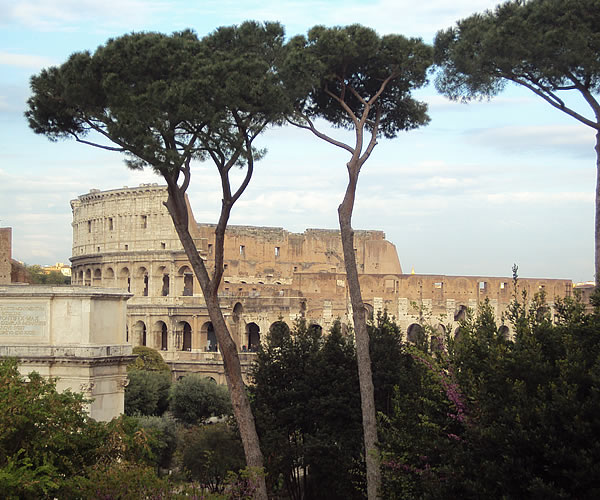 Capital of Italy and located in the central-western region of Latium (Lazio), Rome (Roma in Italian) has a population of over 2.7 million residents, while the full metropolitan area consists of about 4 million inhabitants. The Tiber (il Tevere) winds south through the heart of Rome and derives from the Aniene River (l’Anio.) The Tyrrhenian Sea is located 24 kilometers east of the city centre.

Rome is noted for the State of the Vatican City, an enclave and the sovereign territory of the Holy See, the historic centre (il Centro Storico) and the picturesque neighborhood of Trastevere among other zones.

Rome, the Eternal City (la Città Eterna), or Capital of the world (Caput Mundi in Latin,) is surrounded by seven hills. The Capitoline, Palatine, Viminal, Quirinal, Esquiline, Caelian and Aventine hills determine both the city layout and geography of the historical centre.

UNESCO lists the Historic Center of Rome as a World Heritage Site.

Italy (Italia), officially the Italian Republic, is located on the Italian Peninsula, or Appenine Peninsula, where the geography is recognized by its boot shape and is thus coined “The Boot” (Lo Stivale.)

The Ligurian Sea and Tyrrhenian Sea border Italy on the west, the Ionian Sea on the south and the Adriatic on the east. The countries of France, Switzerland, Austria and Slovenia form its northern border with the Alps creating a natural boundary.

The Appenine Mountains stretch down the peninsula and the Po, Italy’s 652 km (405 mi) river, flows from the western part of the Alps, through the Padan plain, to the Adriatic Sea. Many islands dot the Meditterranean seas which surround Italy, of which Sicily and Sardegna are the largest.

If you want to move money abroad, from Italy or to Italy for example, Fexco provides efficient and secure global bank to bank transfers and bespoke payment solutions for both business and personal clients.

Do you have comments or personal information to communicate about this article? Add your comment.
Find links about overview / geography of Rome and a lot more in The links of expatriation.
Find more definitions and general answers on expatriation issues in the Expat FAQ (Frequently Asked Questions).
Read more...


Go to the Forum to talk more about geography of Rome, overview.
Search for members in Italy


The latest messages posted on the expat forums - Rome