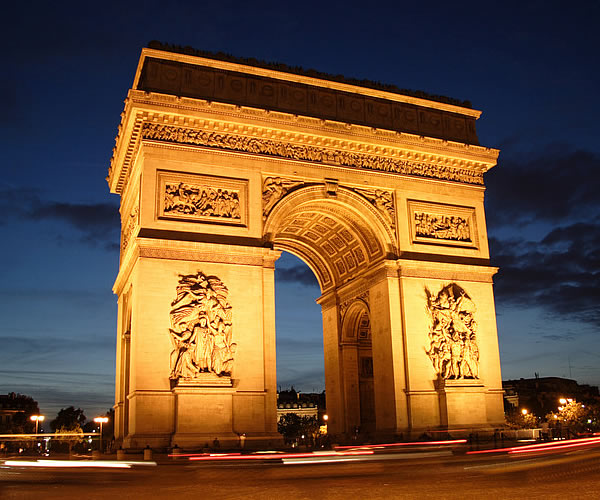 Paris has been on the lips of every dreamer, the mind of every romantic, and below the feet of almost every traveler. Stories of the "City of Lights" have reached past the point of hyperbole, but so much of the myth is true. The city has inspired poets, artists, and practically anyone who has tread it's cobbled streets and elegant terraces. To steal a kiss on a street on Montmartre, to see the cabaret of Moulon Rouge, to climb the many steps of the Eiffel Tower .... the city combines the magic of European mystique with the energy of a world city. Parisian's aloof reputation may be well-deserved as citizens of one of the most exciting cities in the world.

The fleur-de-lys, macaroons, the beret, and the humble baguette can all bring out le sigh from a Francophile. France's influence can be felt around the globe in it's contributions to culture, fashion, gastronomy, economy, and political influence. World-class art, world-class architecture, and world-class food abounds from Normandy to Marseille. The people enliven the old, majestic ideals of the republic while expanding and growing with it's increasingly diverse populace. Whether it is the rustic countryside or bustling cities, France has something no one else has.

The country of France is officially known as the French Republic (République Française). Located in Western Europe, with 4,082.2 km of borders with the Bay of Biscay to the west, the English Channel to the north, Belgium, Luxembourg, Germany, Switzerland, Italy, the Mediterranean, Andorra, Monaco and Spain. In addition, the country still holds territories in South America, the Caribbean, and the Indian Ocean.

France is the largest western European country at 551,695 km2 (European France only). The land is mostly flat plains or gently rolling hills in north and west. The lowest point is Rhone River delta at -2 meters. The highest point is Mont Blanc at 4,808 meters.

France is a large country within Europe and has three distinct types of climate:
Oceanic - In the western part of the country, this climate has a small temperature range, ample rainfall, cool summers, and cool winters
Continental - Also known as a transition type of climate, this can be found in eastern and central France. It is characterized by warmer summers and colder winters than areas farther west. Rainfall is ample, and winters are snowy.
Mediterranean - Found throughout the south of France (except in the mountainous southwest), this has cool winters, hot summers, and limited rainfall.

The time zone is CET - Central European Time. This is GMT +1 hour.

Like most states in Europe, Summer (Daylight-Saving) Time is observed in France. During the summer, time is shifted forward by 1 hour so it is 2 hours ahead of Greenwich Mean Time (GMT+2).

The capital of France, Paris, is tucked into the arc of the river Seine. The city covers an area of 105.39 km2 (41 sq miles) which includes two islands, the Île Saint-Louis and the Île de la Cité. This is the oldest section of the city. Most of the city lies in the "Paris Basin", a low lying continental shelf that has been submerged by ocean waters over geologic time. This has left marine sedimentary deposits such as limestone. Because of this abundance, many of the buildings are constructed of limestone and the deposits can be observed in the Paris catacombs.

The city is relatively flat and low-lying. The lowest point is 35 meters (115 feet) above sea level. However, there are several prominent hills such as picturesque Montmartre.

The historic core of Paris is the Île de la Cité, a small island occupied in part by the Palais de Justice and the Cathedral of Notre Dame de Paris. Spreading out from here, the Eiffel Tower rises above the river Seine that splits the city. The left bank houses governmental offices and is the site of much of the city's intellectual life. It is known for its old Latin Quarter and for such landmarks as the Sorbonne, the Luxembourg Palace and the Panthéon.

The city has undergone vast remodeling, primarily in the mid-19th century. Known for its narrow streets and half-timber houses, more and more of the city is transitioning to wide avenues lined with neo-classical stone buildings. An alignment law regulates building façades of new constructions according to a pre-defined street width. Building's height is limited according to the width of the streets it borders. The overall height limit (set in 1974) for tall building is 18-25 meters in the center and 31-37 meters maximum in the outskirts (except for some small parts such as Front de Seine, or Olympiades-XIII arrondissement with taller buildings).

Paris has typical Western European oceanic climate. This is characterized as mild to moderately wet which is affected by the North Atlantic Current. Rain falls throughout the year with average annual precipitation of 652 mm (25.7 in).

Spring and autumn - Usually feature mild days and crisp nights.
Summer - Warm with average temperatures between 15 and 25 degree Celsius. There are usually only spikes of temperature above 32 degrees Celsius (90 °F).
Winter - Sunshine is limited and days are cold, but generally above freezing. Temperatures are around 7 degrees C (45 °F). Light night frosts are more common than snow.

There are twenty clockwise-spiralling arrondissements (municipal boroughs). They are further split into Quartiers (Districts).

Do you have comments or personal information to communicate about this article? Add your comment.
Find links about overview / geography of Paris and a lot more in The links of expatriation.
Find more definitions and general answers on expatriation issues in the Expat FAQ (Frequently Asked Questions).
Read more...


Go to the Forum to talk more about geography of Paris, overview.
Search for members in France