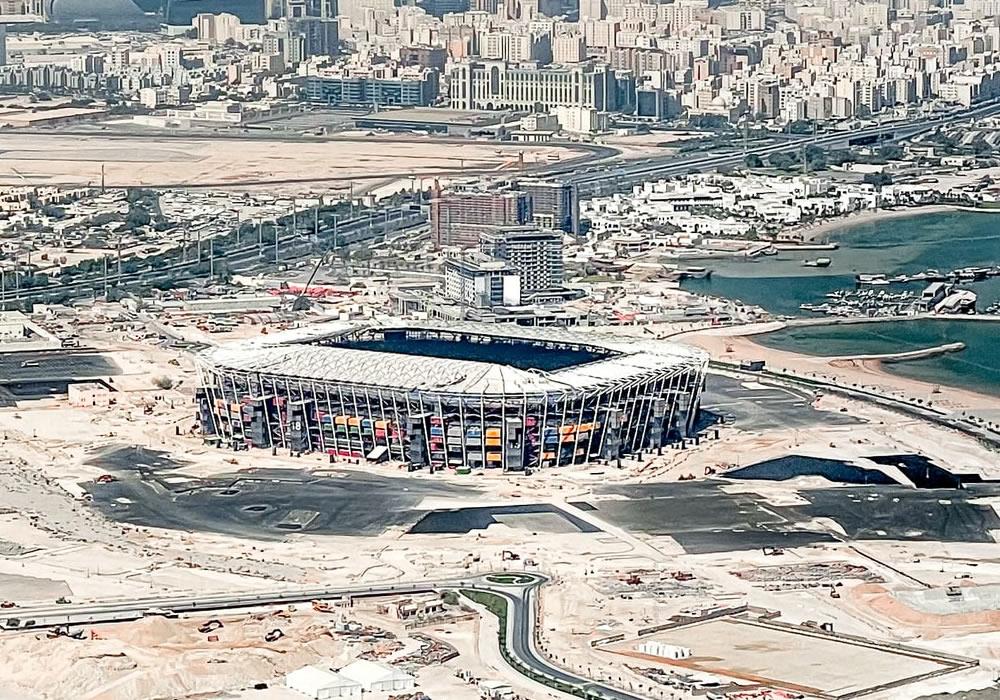 If you do find yourself planning a trip to Qatar for the Football (soccer) World Cup 2022 be sure to read our recap of events leading up to this major tournament and also to be updated on what to expect (including the controversy).

It feels like we've experienced a massive paradigm shift in almost every part of our lives over the last few months. From the archaic and bizarre concept of waging actual war in Europe to the increase in recent climate disasters, it seems that nothing is certain anymore and that nowadays we should be prepared for anything.

The FIFA World Cup 2022 has also not been spared as we've just seen the Russian football team excluded from the 2022 tournament. This happened because some countries refused to participate with the Russian team thus forcing FIFA's hand into removing them from the tournament. Ukraine's participation in November may also be uncertain in light of the recent devastating developments.

This dramatic turn of events - not forgetting the global Covid-19 upheaval - has distracted the mainstream conversation away from the controversy that surrounded FIFA when they first awarded the organisation to Qatar in 2010.

Controversy in awarding the World Cup to Qatar

Controversy have marked the choice of the organizing country since the beginning.

First, the choice of Qatar to host the 2022 football World Cup came as a surprise. The country is known for very high temperatures in the Summer, but it's only after granting the hosting that FIFA officials acknowledged that that playing the event in the searing heat of the Gulf summer was unworkable. As a consequence, FIFA was forced to move the World Cup organisation to November.

Then in 2020, the U.S. Department of Justice published a staggering report saying that representatives working for Russia and Qatar bribed FIFA officials to secure their hosting rights for the 2018 and 2022 football competitions.

In addition, in 2021 there was a massive drive by human rights campaigners to apply pressure on some of the more prominent football teams to exclude themselves from the competition in protest against the human rights violations in the host country. Teams from Denmark, Germany and Norway were urged to exclude themselves from the games and stand in solidarity with the poor working conditions of labourers in Qatar.

Just last year a former employee of the Qatar World Cup organisers who raised issue with unpaid labourer wages was given a five year sentence for alleged corruption and misappropriation of state funds. The man stated that he was not given a fair trial and was compelled to sign a confession. However, officials denied the claim and stated that there was ample evidence against the accused. An appeal saw his sentence decreased to three years but when critics called on FIFA to intervene, the organisation said it needed time to reflect on the verdict.

Aside from the mistreatment of foreigner workers, critics are also questioning how this tiny desert country with no prior experience was awarded the chance to host such a major event. FIFA countered by stating that Qatar was awarded the honour of hosting because of their "strategy of expanding soccer into new regions".

What does hosting entail?

The massive cost required to execute one of the most popular sporting events is staggering. According to Bloomberg Intelligence, the estimated cost to Qatar is a staggering $300 billion.

Qatar is hoping this investment will catapult them into a tourism and business haven rivalling regional neighbour Dubai. The country is expecting the World Cup to boost their economy by $20 billion (equivalent to about 11% of the country’s gross domestic product in 2019). But the event is mostly a way to create opportunities for companies in many different industries well beyond 2022.

As a point of interest, Qatar is the smallest country to host the World Cup ever.

Benefits for the entire region

Organisers are expecting close to 1.5 million visitors during the month-long tournament which will start in November (although there has been criticisms that matches might be poorly attended as fans won't have much fun due to alcohol ban and cothing restrictions).

Even though Qatar has spent billions on improving infrastructure and hotel accommodation there is still a colossal shortfall. There are only around 130,000 rooms provided for by hotels, cruise ships docked off the coast of Doha and a few scattered desert camp sites. Therefore, the surrounding nations of the UAE, Oman, Bahrain, Kuwait and Saudi Arabia will be attractive alternative destinations for football fans. In fact, flight tickets have already surged in price.

"The UAE as a global hub will have every opportunity to capitalise on strong visitor numbers who wish to use the emirates as their base for the tournament games," said David Garner, Mena region commercial vice president of Minor Hotels, which owns the Anantara and Avani brands."Demand will be generated by the 32 countries who have qualified for the World Cup but also from many other global fans."

Qatar is easily accessible to travellers from most the Gulf Cooperation Council (GCC - United Arab Emirates, Saudi Arabia, Qatar, Oman, Kuwait and Bahrain) countries with the main international airport in Doha only an hour away.

"There's an expectation that many football fans heading to the 2022 World Cup in Qatar will use Dubai either as a staging post or as a pre or post visit option due to Dubai's excellent visitor options and attractions," said Stuart Birkwood, general manager of Radisson Red Dubai in Silicon Oasis.

The tiny island of Bahrain, which is just a stone's throw away from Qatar by air has more than 18,000 hotel rooms to offer, while Saudi Arabia, another neighbour, has about 600,000 according to a report. Kuwait also has an assortment of resorts and hotels which could make this oil-producing nation a hub for many fans looking for accommodation.

Even though hotels are competitively priced in the UAE and the surrounding nations, prices can be expected to increase as demand increases.

Currently, there are already no longer rooms available in Qatar during the tournament. Whether this is because they are not released for booking during that period or if they are fully booked already still remains unclear.

What to expect weatherwise

The weather in the region in November should be pleasant. You certainly won't be experiencing the scorchingly high temperatures of the summer. The average temperatures range between 24-25°C but you could see highs of 29°C.

December may bring lower temperatures of about 19°C but the weather is still very mild compared with the rest of the northern hemisphere at that time of year. It is the perfect time to enjoy the outdoors.

Some rules to remember

Things to do in Qatar that are not football related