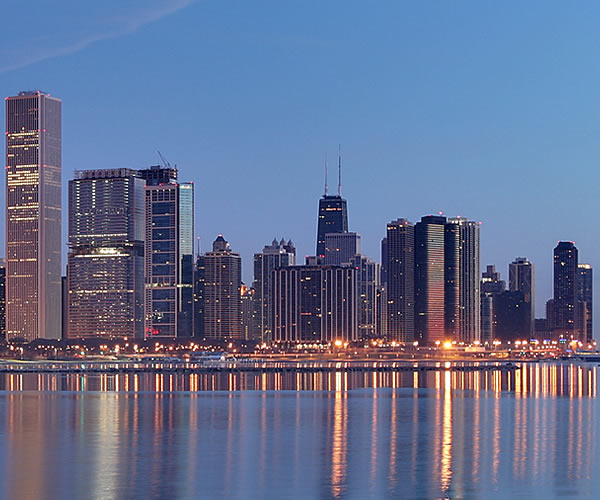 Typical American public elementary schools consist of children aged 6-12 and have Kindergarten (similar to pre-school) to 6th grade. From here they usually attend a middle school of 7th and 8th grade, then finish schooling at a High School from 9th to 12th grade. There are variations of this format found throughout the nation, but most follow this layout. Public schools are supported by the taxpayers and budget and education officials are determined by public voting. To which school a child attends is determined by where they live.

The students of Chicago's Public School system are served by 680 public schools in 32 school districts. There are over 400,000 students in the system with an operating budget of $4.648 billion. Several initiatives, such as the Chicago Reading Initiative and the Chicago Math and Science Initiative are programs that have been implemented district-wide to ensure students meet minimum achievement standards in basic subjects. There are also several specialty schools like the Chicago High School for Agricultural Sciences, situated on the last farm in the city of Chicago, which prepares students for jobs in "anything to do with food and fiber," and Curie Metropolitan High School, with magnet programs in the performing and creative arts and electronic repair and maintenance. For more information on enrollment, statistics, or contact information for the district: http://www.cps.k12.il.us/ or Public Schools Information:

There are also 293 private schools in Chicago with a system that is provided for by student paid tuition. Many schools are religiously affiliated and are completely separate from the state. Tuition is usually very expensive, averaging between $8,000 and $16,000. Scholarships and financial Aid may be available through the school. The Roman Catholic Archdiocese of Chicago operates the city's Roman Catholic schools. Among the more well-known private schools in Chicago are the Latin School and the Francis W. Parker School.

Universities are quite expensive with prices rising every year. Public university can cost around $6,000 to $10,000 in tuition alone with housing, books, and other academic necessities costing much more. The academic school year usually runs from September to June with an optional summer quarter which is another expense. Private university is much more expensive with tuition costing somewhere between $20,000 and even up to $50,000 annually. Scholarships and financial aid help students attend the university of their choice, but most students must take out loans to complete their education.

There are many other important educational institutions within Chicago, including:
The School of the Art Institute of Chicago has more than 2,700 students and holds national stature in art instruction.
The Illinois Institute of Technology has renowned engineering and architecture programs and was host to world-famous modern architect Ludwig Mies van der Rohe for many years.
Loyola University and DePaul University are prominent Catholic universities. Loyola is the largest Jesuit university in the country while DePaul is the largest Catholic university in the U.S.
The Chicago School of Architecture at UIC follows the aesthetic credo, "form follows function" and was shaped by such masters as Louis Sullivan, Frank Lloyd Wright, and a later functionalist architect, Ludwig Mies van der Rohe—all of whom designed buildings in the city and produced in Chicago a veritable living architectural museum.

To facilitate Chicagoans love of knowledge, there is a vast library system. The Chicago Public Library encompasses 75 branches, two regional libraries, and the central Harold Washington Library Center, which opened in 1991 and is one of the foremost educational and cultural resources in the city of Chicago. At 756,000 square feet, the library center is the largest municipal building in the world. The library's collection consists of about 6.5 million books, 14,500 periodicals and serials, 90,000 audiovisual titles, and 3 million microfiche. A special collection of books and materials in 90 foreign languages is maintained, and the library center also has a collection of material from the Chicago Theater Collection, the Civil War Collection, and the Chicago Blues Archives. Within the library center is an 18,000-square-foot children's library, a bustling business/science/technology division, and a Teacher Resource Center offering print and online resources to assist educators. On display throughout the building is an extensive public art collection.

Besides the library center, regional libraries are scattered over the city. Since 1989, the city has built or renovated more than 40 branch libraries. All of Chicago's public libraries offer free Internet access and free access to research databases.

The University of Chicago, internationally recognized for excellence in education and research, maintains a central library facility with more than 7 million printed works and 30 million manuscripts and archival pieces. Special collections are maintained in American and British literature, American history, theology and biblical criticism, American and British drama, and Continental literature. The University of Chicago operates seven separate facilities, including the D'Angelo Law Library and the Social Service Administration Library.

The Newberry Library is an independent research library and was founded in 1887. Free to the public, the library's non-circulating research materials number more than 1.4 million volumes; among the special collections are materials pertaining to Americana and American Indians.

Do you have comments or personal information to communicate about this article? Add your comment.
Find links about education / school system in Chicago and a lot more in The links of expatriation.
Find more definitions and general answers on expatriation issues in the Expat FAQ (Frequently Asked Questions).
Read more...


Go to the Forum to talk more about school system in Chicago, education.
Search for members in the Usa