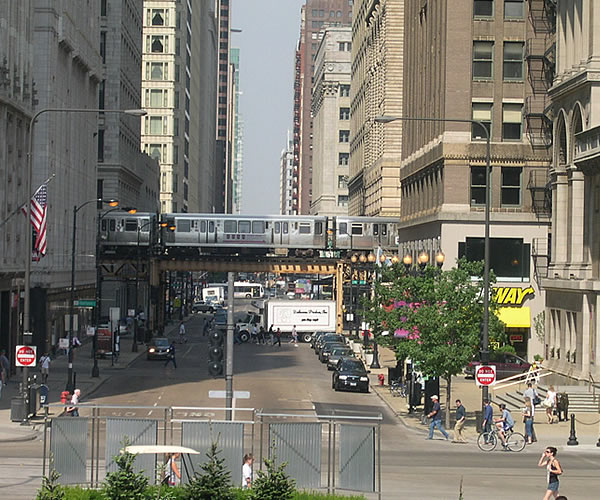 The average commute time for Chicago workers is 35 minutes. Chicago streets conform to a consistent grid pattern; major thoroughfares include east-west State Street and north-south Madison Street, which intersect downtown and provide the numerical orientation for all addresses. Lake Shore Drive, affording a scenic view of Lake Michigan and the skyline, extends along the lake from the northern to the southern city limits.

Transportation is plentiful in Chicago with a variety of services available. The Regional Transportation Authority (RTA) coordinates the operation of the three service boards: CTA, Metra, and Pace.
The Chicago Transit Authority (CTA) handles public transportation in Chicago and a few adjacent suburbs with an extensive network of buses and a rapid transit system known locally as the "L" (for "elevated"). Several lines are designated by colors, including service to both Midway Airport and O'Hare Airport. The CTA's heavy rail transit lines consist of the Red, Blue, Green, Orange, Brown, Purple, Pink, and Yellow lines. Both the Red and Blue lines offer 24 hour service which makes Chicago one of the few cities in the world to offer 24 hour rail service.
The Metra Electric Line shares the railway with the South Shore Line's NICTD Northern Indiana Commuter Rail Service, providing commuter service between South Bend and Chicago.
Pace provides bus service in over 200 surrounding suburbs with some extensions into the city as well.

The Chicago Transit Authority (CTA) operates bus, subway, and elevated train (the "El") routes between the Loop and the nearby suburbs. If you will be using public transportation frequently, passes can be purchased by the week or the month which can save you money. They can either be purchased as a visitor pass, week pass, or month pass on-line, by calling 1-888-YOURCTA, or at the station.

The Regional Transit Authority (RTA) operates bus and rapid-transit service into, and around, the city. For a detailed map of service area, click here.

Bicycles are permitted on all buses 24 hours.

Bicycles are permitted on all CTA and Metra trains during non-rush hours and on all buses 24 hours. Rail transportation is available through Metropolitan Rail also known as Metra. Metra runs commuter trains and buses between the city and suburbs. To make the system easy to understand for new riders, Metra has created a "New Riders Guide". The guide offers tips on how to understand the system as well maps, fares, and on-line ticket purchase.

Passenger rail service into Chicago is provided by Amtrak. Amtrak rail connects cities in all regions of the United States including the Chicago South Shore and South Bend is an intercity commuter rail line. Chicago's Union Station is a major hub of passenger travel throughout the country and travelers can connect to airports, city transport, and rail service at the station.

Chicago's O'Hare Airport (ORD) is Chicago's main airport and lies about 18 miles outside of the city. The airport is one of the busies in the world and supports about 880,000 flights and more than 190,000 passengers annually. Like much of Chicago's, the building itself is an architectural wonder.

Chicago Midway International (MDW) is about 7 miles outside of Chicago and is known as the "premier point-to-point airport in the nation".

Continental Airport Express provides van service from O'Hare and Midway to all downtown hotels, the North Shore, and Oak Brook suburbs. Chicago Transit Authority (CTA) provides rapid transit train service between O'Hare and downtown. An hourly shuttle also operates between O'Hare International and Midway airports (7:00 am to 10:00 pm). Taxis are available at the lower level curb front of all terminals

Finding a cab in Chicago should be easy, but if you need to call one in advance or are in a less-traveled area of the city, there are several companies you can call.

Contact information for some of the approved companies with identifying car colors:

Chicago's location next to Lake Michigan offers a variety of boat tours:

For a complete comparison of companies and values, try Chicago Boat Tours Comparison.

Like most large cities, Chicago's roadways are under constant construction and routes change often. Listening to WBBM 780 or checking their website can save you time and aggravation in trying to find your way around closed roads and through detours. Adding to the confusion is that many of the roadways have nicknames of historical importance that the traffic reporters use instead of the roads official name. For example:

Chicago drivers also tend to be aggressive, beeping frequently and traveling at high speeds. If you are inclined to use the express lanes on the Kennedy, know that these lanes move faster than the local lanes. Don't use them if you are exiting quickly because there's only one place you can exit in the middle and then again at the end. The lanes are reversible and change direction depending on which way the traffic is usually heaviest. The schedule,which can be overruled by IDOT, is 1 am to 11:30 am inbound and 1 pm to 11 pm outbound on Sunday-Friday. On Saturdays the express lanes are switched from outbound to inbound sometime between 1:30 pm and 5 pm and back to outbound sometime between 5 pm and 8 pm.

Also note that if you are heading into or out of Chicago via the Indiana Toll Road, you will spend a portion of your trip on the Chicago Skyway. As the price keeps rising and is now up to $3, try to avoid the Skyway. If you do drive it, watch out for Chicago Police Department which frequently catches speeders here.

Most major car rental companies have outlets at O'Hare(ORD) and Midway(MDW) airports as well as various downtown locations. Some sites offer comparison shopping between companies where other large companies like Hertz and enterprise offer deals exclusive for their company. To reserve a car, you can often find the best deals by reserving on-line, but most companies offer a phone number to help customers with any questions they may have while also taking reservations by phone.

Chicago gas prices are some of the highest in the nation, averaging $3.85. Buying gas in the city is the most expensive, so avoid it if possible. For the cheapest gas go to the suburbs where taxes don't raise prices as much. There are also several websites dedicated to finding the cheapest stations: Chicago Gas Prices and CBS2Chicago.

Do you have comments or personal information to communicate about this article? Add your comment.
Find links about practical life / transport in Chicago and a lot more in The links of expatriation.
Find more definitions and general answers on expatriation issues in the Expat FAQ (Frequently Asked Questions).
Read more...


Go to the Forum to talk more about transport in Chicago, practical life.
Search for members in the Usa