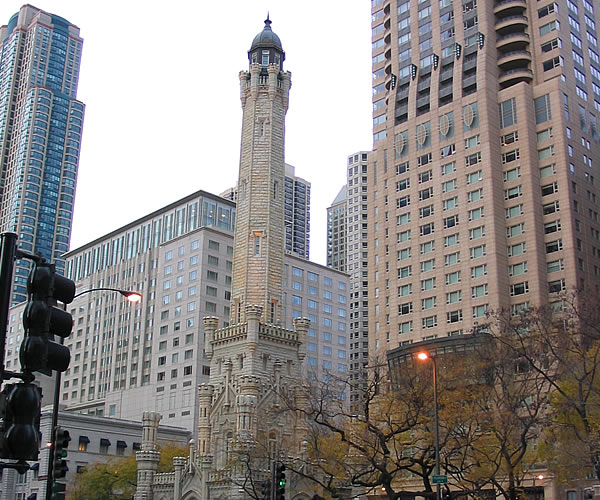 Chicago is located in northeastern Illinois at the southwestern tip of Lake Michigan. The city sits in a web of intersecting waterways; the Mississippi River meets with the Great Lakes here and Chicago itself is intersected by the Chicago and Calumet Rivers. This profusion of water is important to Chicago's history as a port and defines the region as Chicago is 234 sq miles (606.1 km²) and an entire 7 of these miles are covered in water. The lowest elevations run along the waterfront of Lake Michigan, but on average the area is fairly flat with an average elevation of 579 feet (176 m). Because of the low elevation along the waterfront, flooding is not uncommon and a group of city, state, and federal agencies work to maintain the stability of the region.

The climate in Chicago is classified as humid continental featuring four distinct seasons. Temperatures peak in July at about 85°F (29.4°C) with January as the coldest month averaging 34°F (-.5°C). Temperatures can be more extreme, reaching a humid 98°F (37°C) in the summers, with winters reaching as low as -15°F(-26°C). Average rainfall is about 34 inches a year, but it is common for Chicago to receive a significant amount of snowfall, especially on the lakefront. Summer thunderstorms are frequent, but may hit one part of the city without touching the other sections. For forecasts and current weather conditions, consult:
http://www.wunderground.com/US/IL/Chicago.html

Chicago is also known for its strong winds through the heart of the city resulting in the nickname of the "windy city". Winds are actually no stronger in other places, but after the Great Chicago Fire of 1871 the city was rebuilt in a grid pattern resulting in man-made wind tunnels along the streets of downtown. Besides this obvious reason for the nickname, "windy city" has also been said to refer to Chicagoan's penchant for bragging about their city, a rivalry with Cincinnati, and it's politicians who are known to "blow a lot of hot air".

Today's Chicago is marked by one of the world's tallest skylines, including the one-time tallest building in the world, the Sears tower. The city actually has three of the world's 10 tallest buildings, along with the tallest apartment building, the largest hotel, the largest commercial structure, and the largest post office. Some of Chicago's other most identifiable features are less tangible. Chicagoans are passionate about their often losing sports teams like the Cubs, White Sox, and Bears; their "foodie" reputation which includes a "deep-dish" pizza and the Chicago Hot Dog; and the Chicago blues which radiate from the heart of the city.

Do you have comments or personal information to communicate about this article? Add your comment.
Find links about overview / geography of Chicago and a lot more in The links of expatriation.
Find more definitions and general answers on expatriation issues in the Expat FAQ (Frequently Asked Questions).
Read more...


Go to the Forum to talk more about geography of Chicago, overview.
Search for members in the Usa