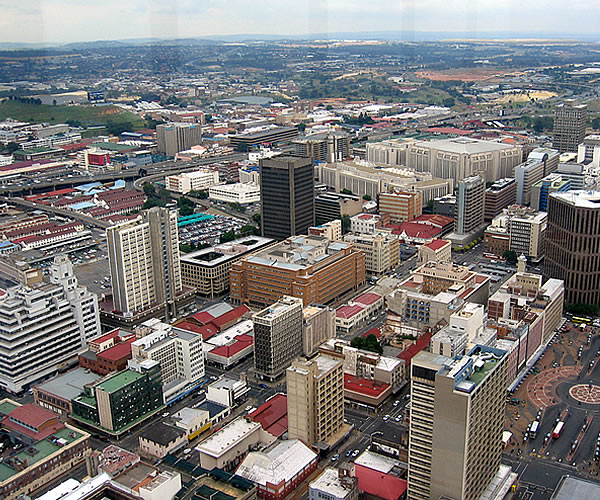 The Republic of South Africa (also known by official names in each of its official languages) is a multiethnic country, however, the Black ethnic group is by far the largest, comprising 79.5% of the population. However, this category is neither culturally nor linguistically homogenous, as they speak a number of different Bantu languages, nine of which have official status. The other significant ethnic groups are White (9.2%), Coloured (an official designation for multi-ethnic or mixed racial persons-- 8.9%) and Asian (2.5%). These classifications are a carryover from apartheid, a political and social policy of racial separation which remained in place in South Africa for much of the 20th Century.  As of mid-2007, the South African population was estimated at 47.9 million.  Football (soccer)-mad South Africa has been named the first country on the African continent to host the Fédération Internationale de Football Association (FIFA) World Cup Finals-- which will take place in 2010.

Johannesburg is by far the largest city in South Africa. It is one of the 40 largest metropolitan areas in the world and one of Africa's only two global cities. Johannesburg is affectionately known by many nicknames, including Jozi, Jo'burg (or Joburg), Egoli (City of Gold), Joni, and Gauteng Maboneng (City of Lights).  Very seldom do the locals refer to the city by its given name.  While Johannesburg is the provincial capital of Gauteng, and houses the Constitutional Court -- South Africa's highest court, it is not one of the country's three capital cities (Pretoria -- Executive; Cape Town -- Legislative and Bloemfontein -- Judicial). Gauteng is the wealthiest province in South Africa, having the largest economy of any metropolitan region in Sub-Saharan Africa.

According to the 2007 Community Survey, the population of the Greater Johannesburg Metropolitan Area was almost eight million. The population of the municipal city is almost 4 million. Johannesburg's land area of 1,645 square kilometres (635 sq mi) is very large when compared to other cities, resulting in a population density of 2,364 inhabitants per square kilometre (6,123/sq mi). Johannesburg also encompasses Soweto to the south west, a township that the apartheid government established to accommodate the large number of Black  and other non-White migrant workers.

Crime is a big problem in Johannesburg, but it is important to put things in perspective. Most travellers come and go without incident, and much of the crime afflicts suburbs which visitors have little reason to stray into. Most people in Johannesburg are friendly and are not rip-off artists. It is wise to seek local advice and listen to it. Visitors are very unlikely become victims of violent crimes -- even criminals understand that assault and murder attract far more attention from the authorities than robbery. Using common sense and remaining aware of one's surroundings can go a long way in preventing oneself from becoming a statistic. Potential victims are most vulnerable when using an ATM, so it's best to avoid doing so. Store valuables in the hotel or hostel safe, don't dress too conspicuously and take along only what money is absolutely necessary. The idea is to blend in as much as possible, not stand out like a (perceived) rich tourist.

When arriving into Johannesburg, if the hotel or hostel does not have transport from the airport, the wisest plan is to catch a legitimate taxi rather than a Minibus Taxi, which is best left to those who know what they are doing. It's more expensive, but the investment may make the difference between keeping one's possessions and money -- or losing them. Never walk out of Park Station with luggage without getting straight into a car. When driving, make sure the car doors are locked, and leave a car's length from the vehicle in front in order to be able to drive away if necessary. It's worth noting that it is not illegal in Johannesburg to run a red light if there is a reasonable fear of assault.

The Johannesburg-Pretoria Metro train is targeted by muggers, so don't go to Pretoria this way. The northern suburbs and the cultural precinct in Newtown are generally safe to walk around, but be very careful about venturing into sections of the inner city without getting local advice first. The central business district is very busy and safe during the day, but becomes empty, and dangerous, after sundown. The inner city suburbs of Hillbrow - with the exception of Constitution Hill - and Yeoville pretty much no-go zones at any time of day. If the worst happens and a gun or knife is produced -- don't fight. Just give the perpetrator the money or whatever is being demanded.

South Africa is located at the southern tip of the continent of Africa. To the north of South Africa lie Namibia, Botswana, Zimbabwe, Mozambique and Swaziland, while the Kingdom of Lesotho is an independent enclave surrounded on all sides by South African territory. Even though South Africa is classified as semi-arid, there is considerable variation in climate as well as topography. The South African coast stretches 2,798 kilometres (1,739 mi) and borders both the Atlantic and Indian oceans. South Africa actually has a generally temperate climate, due in part to it being surrounded by oceans on three sides, by its location in the climatically milder Southern Hemisphere and due to the average elevation rising steadily towards the north (towards the Equator) and further inland. The climatic zones vary, from the extreme desert in the farthest northwest to the lush subtropical climate in the east and along the Indian Ocean. From the east, the land quickly rises over mountainous terrain towards the interior plateau known as the Highveld.

The Free State is particularly flat due to the fact that it lies centrally on the high plateau. North of the Vaal River, the Highveld becomes better watered and does not experience subtropical extremes of heat. To the north of Johannesburg, the altitude drops beyond the plateau of the Highveld, and turns into the lower lying Bushveld, an area of mixed dry forest and an abundance of wildlife. East of the Highveld, the Lowveld stretches towards the Indian ocean. It has particularly high temperatures, and is also the location of subtropical agriculture. The high Drakensberg Mountains, at the southeast of the Highveld, offer limited skiing opportunities in winter.The coldest place in South Africa is Sutherland in the western Roggeveld Mountains, where midwinter temperatures can reach as low as -15 degrees Celsius (5 °F). The deep interior has the hottest temperatures: A temperature of 51.7 °C (125 °F) was recorded in 1948 in the near Upington.

The interior of South Africa is a vast, rather flat, and sparsely populated scrub land, which is drier towards the northwest along the Namib Desert. In contrast, the eastern coastline is lush and well-watered, which produces a climate similar to the tropics. The extreme southwest has a climate remarkably similar to that of the Mediterranean with wet winters and hot, dry summers, hosting the famous Fynbos Biome. This area also produces much of the wine in South Africa. This region is also particularly known for its wind, which blows intermittently almost all year. The severity of this wind made passing around the Cape of Good Hope particularly treacherous for sailors, causing many shipwrecks. Further east on the south coast, rainfall is distributed more evenly throughout the year, producing a green landscape. This area is popularly known as the Garden Route. South Africa also has one possession, the small sub-Antarctic archipelago of the Prince Edward Islands, consisting of Marion Island (290 km²/112 sq mi) and Prince Edward Island (45 km²/17.3 sq mi) (not to be confused with the Canadian province of the same name).

Johannesburg is located in the centre of the Highveld, at an elevation of 1,753 metres (5,751 ft), and receives an annual rainfall of 760 millimetres (30 in). Johannesburg is on the south side of the prominent ridge called the Witwatersrand (Afrikaans for White Water's Ridge), and the terrain falls to the north and south. By and large the Witwatersrand marks the watershed between the Limpopo and Vaal rivers. The north and west of the city has rolling hills while the eastern parts are flatter.

The city enjoys a dry, sunny climate, with the exception of occasional late afternoon downpours in the summer months of October to April. Temperatures in Johannesburg are usually fairly mild thanks to the city's high altitude, with the average maximum daytime temperature in January of 26 °C (79 °F), dropping to an average maximum of around 16 °C (61 °F) in June. Winter is actually the sunniest time of the year, with cool days and cold nights. The temperature occasionally drops to below freezing at night, causing frost. Snow is rare -- measurable snowfalls have occurred in May 1956, August 1962, June 1964, September 1981 and a very light snowfall in August 2006.  The most recent snowfall was on 27 June 2007, accumulating up to 10 centimetres (3.9 in) in the southern suburbs. Regular cold fronts pass over in winter bringing very cold southerly winds but usually clear skies. The annual average rainfall is 713 millimetres (28.1 in), which is mostly concentrated in the summer months. Infrequent showers occur through the course of the winter months.

Johannesburg is the source of a large-scale gold and diamond trade for South Africa, due to its location on the mineral-rich Witwatersrand range of hills. Many trees were originally planted in the northern areas of the city at the end of the 19th century to provide wood for the mining industry, despite the relatively dry climate. As a result Johannesburg now has over ten million trees, and has the biggest man-made forest in the world.

Do you have comments or personal information to communicate about this article? Add your comment.
Find links about overview / geography of Johannesburg and a lot more in The links of expatriation.
Find more definitions and general answers on expatriation issues in the Expat FAQ (Frequently Asked Questions).
Read more...


Go to the Forum to talk more about geography of Johannesburg, overview.
Search for members in South Africa


The latest messages posted on the expat forums - Johannesburg