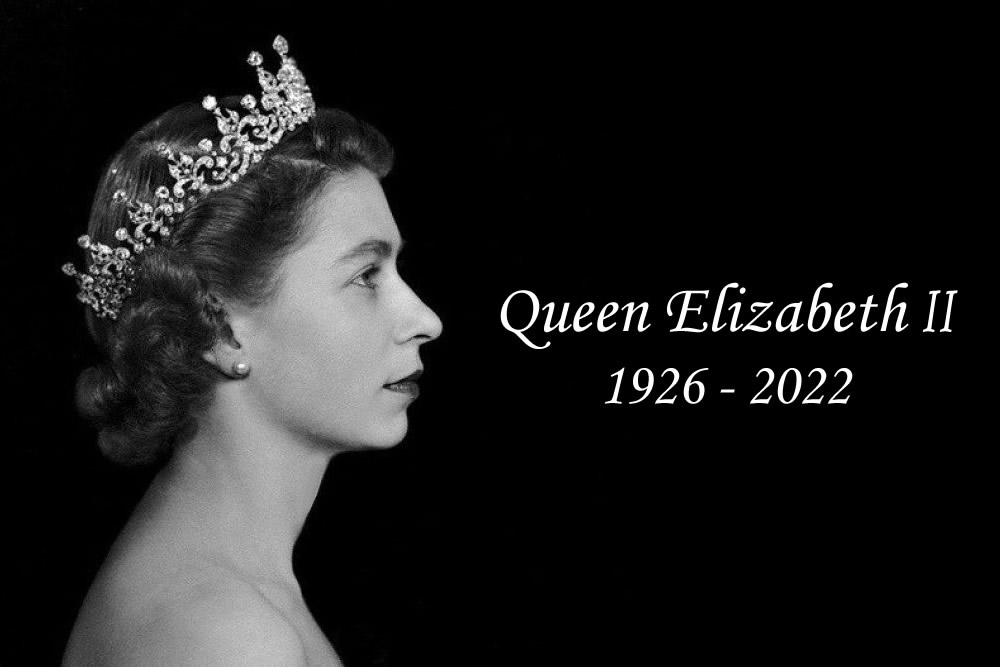 The 96 year old Queen died on Thursday 8 September 2022 at Balmoral in Scotland with her son the Prince of Wales Charles, now the King, and her daughter the Princess Royal Anne by her side.

For most people, she has been the only British queen that they can ever remember. All along her reign, she was characterised by her kindness, discretion and reserve. Even when Brexit was threatening to break up the country, it was still impossible to know exactly whether she was in favour or against the European Union link. That might be an explanation why she was respected even by the ruthless English tabloids.

Unlike her son, now King Charles III, known for showing strong opinions on some topics such as environment and architecture, it's almost as she was mostly appreciated for saying nothing, not expressing any opinion in public. "She was a relic from a time when the monarchy had to be read from a distance, like tea leaves, the subject of close interpretation, unspoken visual clues", Miranda Sawyer said in GQ.

In private, she may have been different, as her interlocutors often talked about her sense of humour and her wise advice. One of the best obituary came certainly from Justin Trudeau, the Canadian Prime Minister who spoke with what seemed to be sincere emotion:

Over 70 years the world has changed immensely: The United Kingdom adapted to the loss of its empire, transformed from an industrial country to an economy of services, adjusted to its diminishing status of a world power, joining and then leaving the European Union, saw Scotland organising a vote to drift apart... but the Queen was always there.

Elizabeth II has been a marker of continuity, being the same (although she moved from a frail young woman, to a smiling old lady) and doing the same things. It is reported that the Queen went to the same place every year for her holiday, used the same clothes designer, carried the same black bag, had the same breakfast. As a routinely event, even if they couldn't always listen, British people knew she would be broadcasting her message to the nation each 25th of December. In April 2020, in the turmoil of Covid, she was there again to address the British people and tell them that "better days will return".

For most of her compatriotes, she was the bedrock that everyone thought would be there forever, a persistent presence, an anchor of stability, the symbole of the country and the last great British institution.

The slow run-up of the Queen's death announcement

"The Queen died peacefully at Balmoral this afternoon. The King and Queen Consort will remain at Balmoral this evening and return to London tomorrow”. Those are the only two sentences used by Buckingham Palace at 6:30 p.m on Thursday 8 September to announce to death of the Queen Elizabeth II.

From late morning this same day, the BBC had switched to a continuous update on the Queen's health as news became more and more alarming, with the announcements that “Following further evaluation this morning, the Queen’s doctors are concerned for Her Majesty’s health and have recommended she remain under medical supervision. The Queen remains comfortable and at Balmoral” and that the close family was immediately gathering to Balmoral.

There have been speculations that some people knew earlier this afternoon already that the Queen passed away. Guido Fawkes published a news announcing the death at 3.06pm before deleting it quickly. Everyone at the BBC switched to dark clothes and black ties but it still uncertain who knew what as everyone seemed to wait for the official statement to be issued.

UK Prime Minister Liz Truss was told about the Queen's death at 4.30pm but she knew the Queen was gravely ill before she entered Parliament to deliver a major statement on energy bills on Thursday morning. At 12.21pm, during the speeches in parliament, a small piece of paper also circulated along both front benches and the looks of perplexity on the faces was a mark that something had happen.

It was later reported that the use of the word "comfortable" was a a coded message warning of the Queen's imminent death. A BBC journalist said: "They gave us a six-hour run up with the ‘comfortable’ announcement, which is preferable to just dropping on wires like they did with the Duke of Edinburgh".

Having reigned more than 70 years (the country had just celebrated the Queen's Platinum Jubilee last June), all authorities and media had plenty of time to prepare. In the press industry, it is well known one have many articles already prepared for the death of a celebrity and ready to be release minutes after the fatal event happens (two years ago French radio RFI published by accident dozen of obituaries of people well alive). The BBC was said to have up to 48 hours of programmes ready to broadcast in case of the Queen's death, in addition to live reports.

For the British authorities, everything was also fully ready for decades and the procedure well documented up to the smallest details. Operation London Bridge (also known by its code phrase "London Bridge is down", as a way the Queen's death was planned to be communicated to the Prime Minister by the Queen's private secretary) is the funeral plan for Queen Elizabeth II and its initial draft dated from the 1960s. The not-so-secret plan was however only revealed in detailed in 2017 when it was leaked in the British newspaper The Guardian but also obtained by Politico with substantial details last year. Beside Operation London Bridge was also implemented Operation Unicorn which is the plan in the event that the Queen dies while in Scotland.

More than a million people are currently queuing to pay their respect before the Queen's coffin, and on the day of the funeral, they expect 2000 people to be packedinto Westminster Abbey including mostly head of states and important figures. Therefore, this was a meticulously reharsed and planned security operation that involves many organisations, including UK government departments, the Church of England, the Metropolitan Police Service, the British Armed Forces, the media, the Royal Parks, London boroughs, the Greater London Authority and Transport for London.

The 10 days following the death of the Queen follow a particularly intricated choregraphy. The day that the Queen dies is referred to as D-Day, while every day afterwards will be referred to as D+1 and D+2 and so forth. However, due to the late announcement in early evening, most of the events planned for D-Day on Thursday moved to Friday, considered to be in fact D+0.

After Queen Elizabeth II died on Thursday, her son Prince Charles automatically and immediately became monarch - and in his case, he became King Charles III, and his wife, Camilla Duchess of Cornwall, became Queen Consort.

The queue to see the Queen lying in state has passed Tower Bridge and is now over 4 miles long, as thousands wait to pay their respects to the late monarch. pic.twitter.com/HzKiCzjJ8k

On Friday , the queue became nearly 5 miles long and they reached the capacity planned by the organiser with a start at Southwark park, and they needed to pause it momentarily for new joiners. Mourners were originally told there was more than a 24-hour wait when the queue reopened. The official queue tracker was showing that on Saturday morning the waiting time was up to 16 hours! 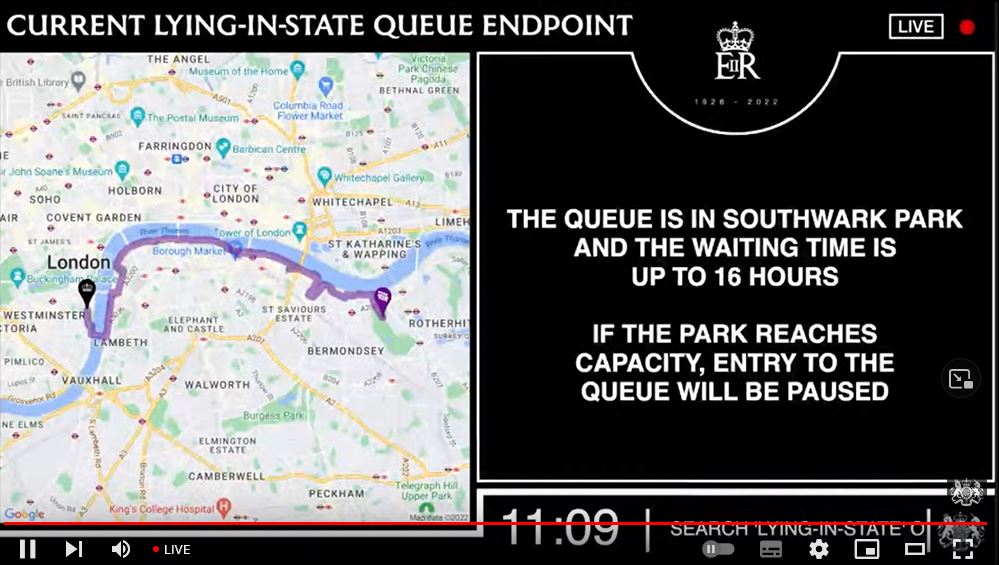 According to The Independent, medics have already treated hundreds of members of the public along the route of the queue, with faints and collapses, resulting in head injuries. Many of them needed to be taken to hospital.

In the meantime, representatives from the Commonwealth realms also joined to pay their respects and the King and Queen Consort attended several meetings. On Friday evening, the Queen’s four children (the King, the Princess Royal, Prince Andrew and the Earl of Wessex) stood in silence at the four sides of the catafalque in Westminster Hall and started a 15 minutes vigil. On Saturday evening, it was the turn of the Queen’s eight grandchildren to do the same.

Downing Street has announced that a one-minute silence will take place on Sunday evening at 8pm BST to “mourn and reflect on the life and legacy of Queen Elizabeth II”.

The Queen will be buried at the King George VI Memorial Chapel, an annex to the main chapel, in Windsor. This is where other members of the royal family are already buried, including her mother and father and her sister Princess Margaret's ashes.

Then, the remains of her husband, Prince Philip, who was buried last April, will be moved from the Royal Vault at St. George’s Chapel to the King George VI’s Memorial Chapel so that he can be laid to rest next to the Queen.

A period of royal mourning for members of the royal family and royal households will be observed until seven days after the Queen's funeral on 19 September, ending on 26 September.

The Queen is dead, and with her a certain idea of a “united kingdom”. Long live the King, and the future will show how he intends to leave his mark in history.

More articles
Your Short Guide to Living in Singapore as an Expat
Singapore, a sovereign republic in Southeast Asia, has a reputation for high-quality expat living. If you are thinking ...
Should the wealthy pay more taxes?
Taxing the wealthy is viewed by many as the easiest way to increase revenue without burdening the general population. ...
Queen Elizabeth II death: about protests and the future of the British monarchy in the world
After a reign of 70 years, Queen Elizabeth II passed away on Thursday 8 September 2022 at the age of 96. Beside the ...
Top Best Payment Methods for Freelance International Writers
Here are the top best payment methods for freelance international writers located anywhere in the world. ...
Renting Safely: How to Find Reliable Real Estate Sites in Another Country
Moving home requires a certain level of research to ensure you find the perfect spot. However, when you decide to move ...