In 2025, a brand-new city should open in the Saudi Arabian desert. Named NEOM, the 26,500-square-mile metropolis is being built from scratch with a colossal investment of $500 billion.

NEOM is being designed as a “global hub” for the 21st century, with the goal of attracting businesses and entrepreneurs from around the world. The city will have its own laws and regulations, separate from the rest of Saudi Arabia, and will be powered entirely by renewable energy.

Construction is already underway, and the first phase of NEOM is expected to be completed by 2025. When finished, the city will be home to more than 1 million people and will feature high-tech industries, luxury hotels, and artificial intelligence-powered homes.

NEOM is just one aspect of Saudi Arabia’s ambitious plans to modernize the country and diversify its economy. The future city is part of the Saudi government’s Vision 2030, which aims to reduce the kingdom’s dependence on oil and create new jobs in the private sector.

3 main parts of the futuristic city

Nestled along the northwestern desert shores of the Red Sea facing Egypt, the city of NEOM is promising to be a futuristic city of epic, science-fiction proportions. The city will sprawl over a total area in excess of 26,500 square kilometres (10,230 square miles), which is the size of a country like Kuwait or almost 33 times the size of New York city! 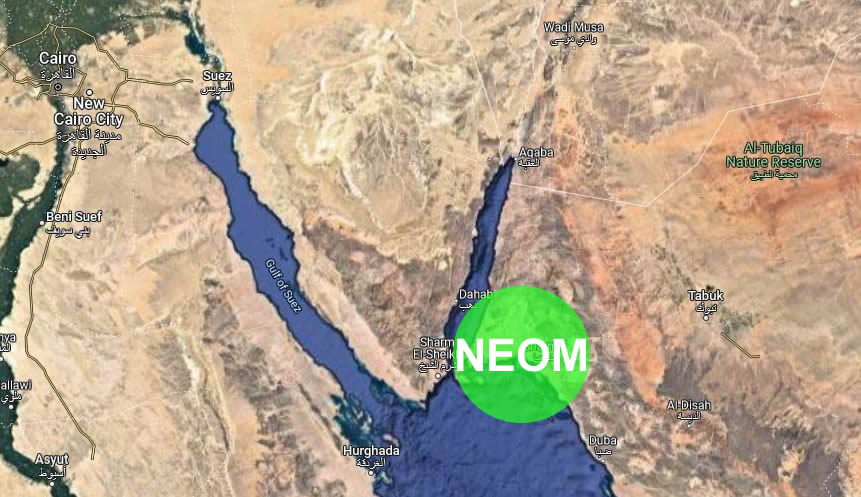 According to its developers, this eco-megacity will offer sustainable, environmentally-friendly and a high quality of life for tourists and all its residents and will house cutting-edge technology to form the foundations of the next chapter in humanity’s history.

NEOM should boast a short 4-hour flight to almost 40% of the globe. It should be almost 10 degrees cooler than the rest of the region, while using 100% renewable energy, and be surrounded by nature.

The idea is that NEOM will be governed totally independent of the Saudi government and its judicial system. In fact, the legal system will be drawn up by investors.

These are the three main developments of NEOM:

One example of a revolutionary development within the megacity is a sector called The Line. It is designed to be about 170km (105 miles) in length and will shoot straight through the desert. It will have the capacity for one million residents. 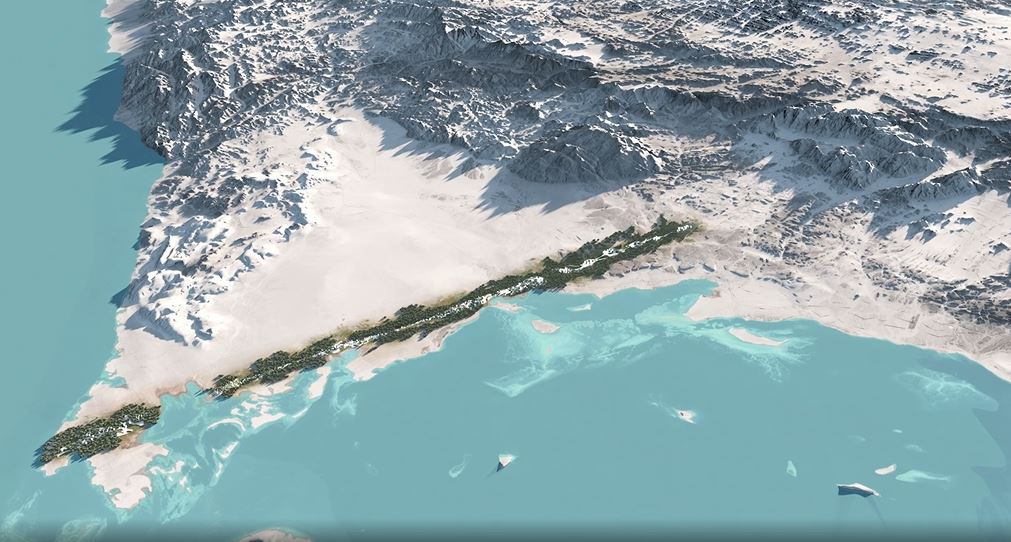 This particular project will be built in phases, one block at a time.  Each block will be self-supporting with its own schools, shopping districts and other amenities only a short distance away for residents who can walk or cycle to a destination.

This city will be car-free. At the end of this development there will be high speed trains to make other blocks and areas accessible.

This is the “mountain” development that will include both natural and man-made landscapes. It is located 50 kilometres from the Gulf of Aqaba coast surrounded by the pristine ranges of the Sarawat Mountains.

In this particular area of Saudi Arabia where Trojena is located, winter temperatures plummet to below freezing and year-long temperatures are generally cooler than the rest of the region.

Trojena will have a ski slope, mountain biking, watersports and world-class wellness facilities. The Ski Village will be located at Neom Peak at around 2,400 metres above sea level offering exciting snow skiing during winter months, and synthetic slopes for the rest of the year. Landmark features will include a vast man-made freshwater lake.

Tourists can expect year-long adventures at Trojena: November to March will offer skiing and snowboarding, hot air ballooning and a winter fashion week. March to May will offer high altitude training, paragliding, climbing and an ironman athletics events. May to September will focus on culture with music, art and food festivals on offer. There will also be a wellness season that will include yoga retreats and a host of events aimed at wellbeing.

This will be the largest floating structure globally. It is projected that by 2030 there will be about 70K jobs on this structure with a population of 90K.  It will form the centre of innovation using only clean industries and clean energy. The fully automated port will be completely integrated with the smart supply chain network.

The location of the Oxagon will be optimal for local, regional and global connectivity with its excellent networks of road, air, highspeed rail and sea transport links.

Apart from the excitement NEOM has generated with its innovative ideas, it has also drawn many criticisms.

Some have questioned the wisdom of building a brand-new city in a very remote location, in the middle of the desert in Saudi Arabia. This has led to concerns about the feasibility of the project, and whether it will be able to attract the necessary population to make it a viable city. There are also worries about the environmental impact of the project, as it will require large amounts of water and energy to sustain.

The cost of the project with an estimated price tag of $500 billion is another factor that has raised eyebrows. Critics say that the city is a waste of money and that it is not feasible.

Last but not least, NEOM is being built by a government, which has a poor track record when it comes to human rights. This has led to concerns about the city being a "police state", and whether residents will have any real freedoms. It has also been reported that there are people inhabiting this area that are being forced to move in order for construction to continue.

Overall, there are some serious concerns about the NEOM city project, and whether it is really in the best interests of those who will live there. The Saudi government is betting that NEOM will be a success, but only time will tell if this bold experiment will pay off... if it ever gets built.