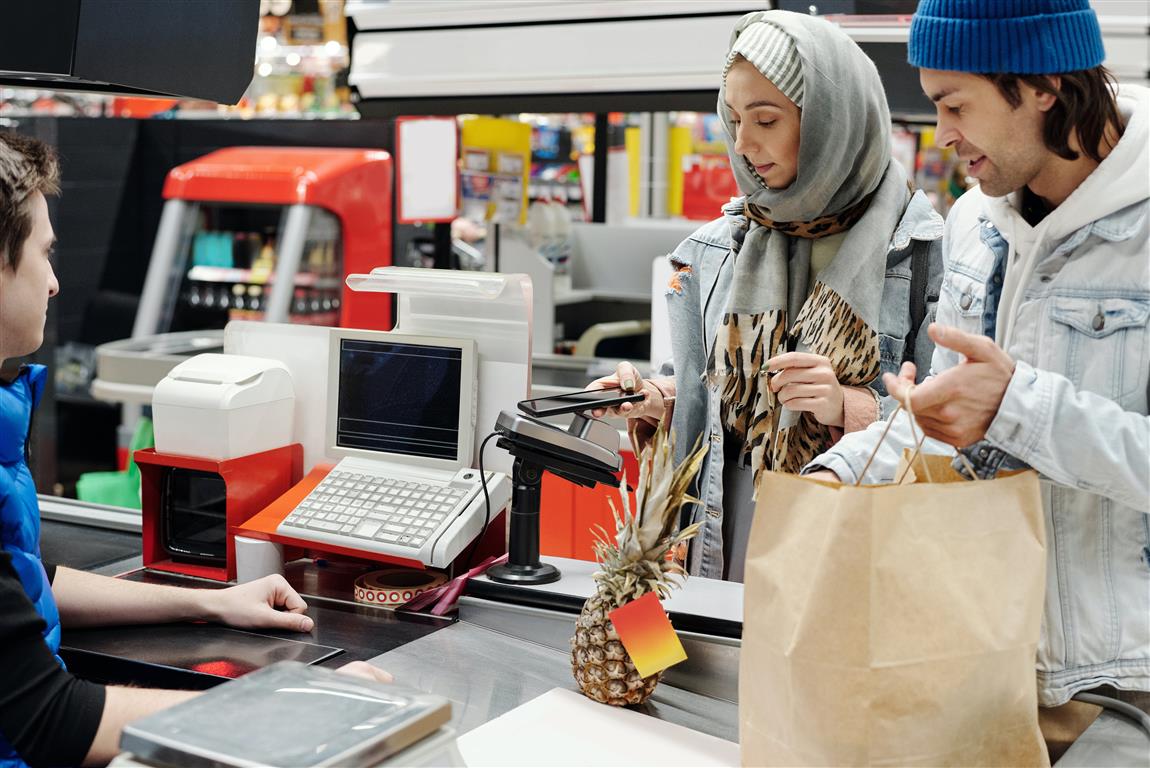 The latest ranking has provided some changes, with Zurich, Paris and Copenhagen now the most expensive cities to live in Europe, while Moldova, Kosovo and Ukraine are queuing at the bottom.

Europe has always been a melting pot of cultures, nationalities and opportunities. The Covid19 pandemic led many people to work remotely, thus having the freedom to choose where it's best to live.

The old European continent is home to some developed countries with a very good quality of life, and some in a development process, and is also influenced by the distinct cultures who inhabit it. In fact, Europe's rich and diverse culture attracts people from other continents to study or to try making a living there. In many European countries, the living standard is rising to the highest standards in the world. In the age of the internet nomad, there are more reasons than ever to move abroad and choose the best country or city that best suits your interests.

In 2019, before the pandemic struck, the top European expat destinations were Portugal, Spain, Czech Republic, Bulgaria and Luxembourg, while the least popular were Italy, UK and Greece, as reported in the InterNations Survey.

Most expensive cities in Europe 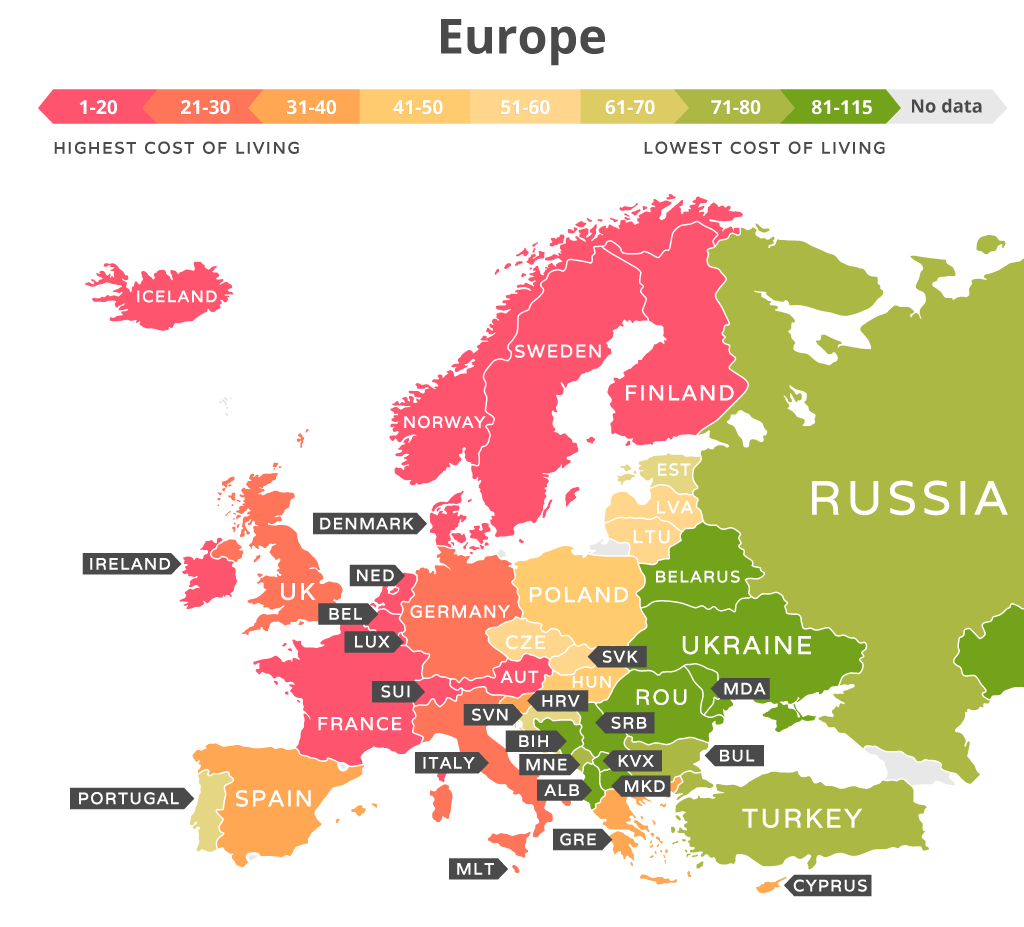 At the other end of the spectrum, as data from Numbeo (and graphs from Movehub) shows, Europe's most affordable country is Ukraine, which places 113th in the global rankings, followed by Kosovo and Moldova.

A new edition of the Worldwide Cost of Living report shows how the Covid-19 pandemic has changed the cost of living in about 130 cities around the world since the start of 2020. These are their main conclusions from the Economist Intelligence Unit report regarding Europe:

The most liveable cities in Europe

Farandwide has compared the survey of Mercer's Quality of Living and The Economist Intelligence Unit (EIU) Liveability Index. Taking into account crime rates, healthcare, infrastructure, quality of water, levels of corruption, culture and education, availability of sporting facilities and environmental concerns, they came up with some of the most liveable cities in Europe. Here are the top 10:

Vienna, capital of Austria, is not only the most liveable city in Europe, but the world, according to both the Mercer and EIU reports. It achieved sterling ratings in measures such as stability, infrastructure, education and healthcare.

The former capital of the Austrian Empire has a reputation for its baroque buildings and cafes famous for their sweet treats, such as Apfelstrudel, but also for the summer festivals and concerts by the Danube.

Zurich is a multicultural city with a medieval centre, surrounded by mountains, with a river and a lake, whose water is mineral-water clear, and a fabulous eating and drinking culture. The city is also host to the FIFA Football Museum; a Zoological Museum with a stuffed version of every Swiss species in attendance, and a Money museum.

Although it's most famous for the Octoberfest, Munich is not just about beer and pretzels. The architecture of the Marienplatz, and the Englischer Garten are symbols of the city, and then there is also the surfing on the Eisbach river.

Düsseldorf is a very liveable city, although not on the global tourist radar. The capital of the industrial hothouse county of North Rhine-Westphalia is a wealthy and chic city. Some of the world's top architects have built here and Frank Gehry alone has three building complexes next to each other, making for a dramatic skyline.

For the anecdote, Düsseldorf is also home to Europe's third-largest community of Japanese.

Currently Germany's (and Europe's) banking centre, Frankfurt is a very popular city to live in. The old town centre, which was heavily bombed during the war, has now been faithfully reconstructed and offers a great atmosphere with its cobbled pedestrianized streets, shops and bistros, and squares covered in chairs and umbrellas, inviting people to stop for food and a drink.

Denmark's happy population has in recent years become known in the worldwide press because of their "hygge" approach to life. Encompassing the creation of a comfortable atmosphere at home and enjoying the good things in life, "hygge" probably helped Copenhagen nab a high spot on the list.

It is also one of the most Instagram-able cities with its Little Mermaid sculpture, celebrating local author Hans Christian Andersen, its oriental-looking Tivoli Gardens, the world's oldest theme park, and the colourful facades along the Nyhavn canal.

Geneva is a regularly overlooked Swiss gem, situated by Lake Geneva - one of the largest in Europe, and surrounded by the Alps. It is clean, safe, rich and cultural, all bonuses when it comes to liveability. Its beauty has inspired many poets and authors, such as Byron, Doyle and Twain.

The old town, with its cathedral dating back to the 1200s, is a maze of cobbled alleyways, and the variety of cafes, shops and restaurants reflect the cosmopolitan community working at the many international institutions.

Basel is a cultural wonderland, home to 40 museums. Among the most popular is the Kunstmuseum Basel fine-arts museum, home to one of the largest and oldest collections in Europe. Pretty much all the biggest names can be found here, including Picasso, Van Gogh and Warhol.

High scores on culture and environment shouldn't come as a surprise with Amsterdam. The city of canals, barges, flowers and free-thinking is a perennial favourite when it comes to living and also visiting. This eco-friendly city is famous for its impressive number of bikes, the most common mean of transportation used by locals.

Germany's capital is one of the hippest cities of them all. Berliners are embracing life and living it to the fullest. Cafes, restaurants, bars, beer gardens, music and art venues are found around every corner, and there is also a counter-cultural squatters movement. Once divided by the Berlin wall, the east and the west side still have really noticeable differences. The city is like a canvas for street art, and the population is an amazing cocktail of nationalities from all over the world.