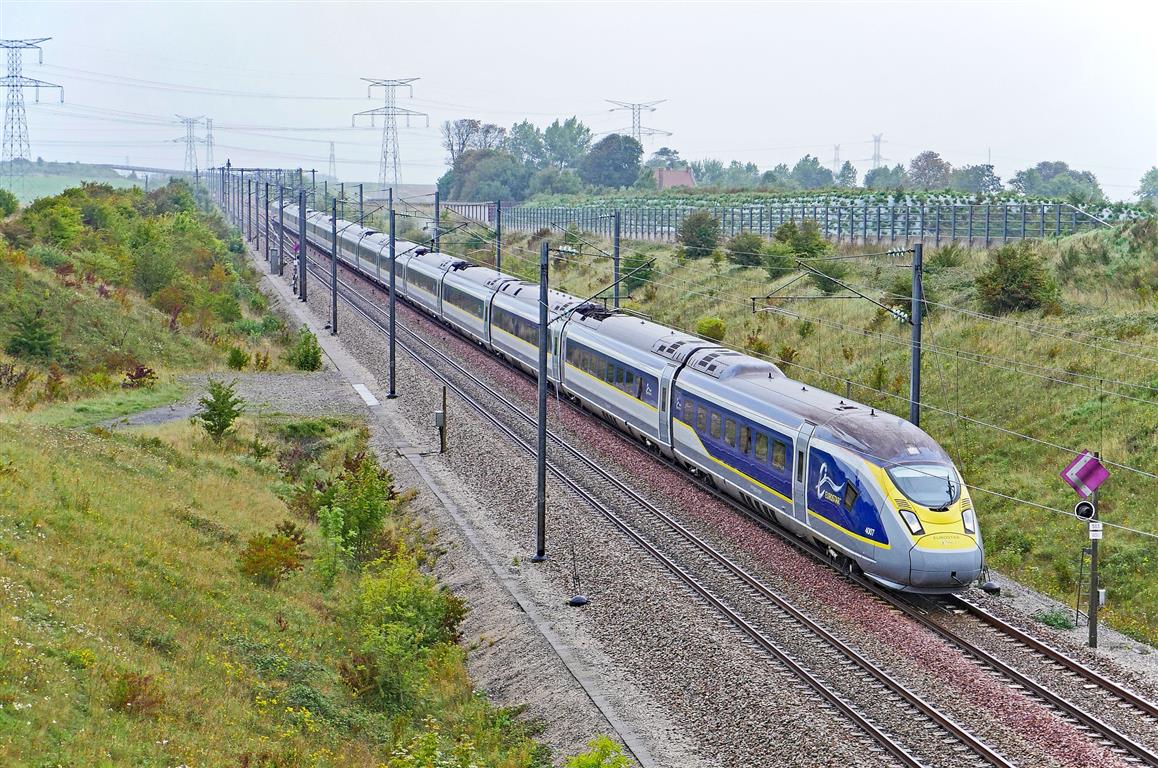 Eurostar has been the favourite route between the European continent and England for the past 26 years, linking Paris and Brussels to London in 2 hours with high speed trains. Brexit was already seen as a catastrophe for the rail company, but will the pandemic be the last nail in the coffin?

During the lockdown imposed both in France and the UK in Spring 2020, the cross-channel rail company Eurostar cut its service from about 20 journeys a day between Paris and London (and about 10 to Brussels) to only two daily return services. The company claims that they are seeing a 95 per cent fall in traffic since March this year and the British daily newspaper Guardian reports figures even worse, with passenger numbers now just 1% of what it was before the pandemic. Prospects for 2021 look dull as Eursotar has already announced that they will reduce their timetable, focusing only on their core routes and destinations with the highest demand.

According to a report from consulting company Steer (for HS1 Ltd) published in March 2020, tourists arriving via High Speed 1 (HS1), the line built for Eurostar in the south of England, supports directly more than £427m of economic benefits every year. HS1 is used by 11 million Eurostar passengers to be added to the 15 million domestic passengers (with Southeastern rail company) each year. Tourists arriving from the continent pump £2bn in the UK economy each year and the number of jobs created directly or indirectly is equivalent to 3,600 full-time employees. Steer calculated that, in the sixteen years since the first section of HS1 opened, cumulative benefits of £4.5bn would have been delivered.

Eurostar is fighting for survival

In the Independent, Jacques Damas, CEO at Eurostar and Dyan Crowther, CEO at HS1 say:

"We, along with other businesses and the public at large, have been encouraged by the positive news of vaccines. However, we recognise that it will take time to protect the whole population and allow us to return to life as normal. Our outlook for 2021 therefore continues to be a dramatic loss of revenues and significantly lower passenger numbers than can sustain our business."

They explain that they have secured £200m additional financing from Eurostar's shareholders, but this is not enough. Eurostar is owned 55% by SNCF French Railways, 5% by SNCB Belgian Railways and 40% originally by the UK government, now sold to overseas investors (Caisse de dépôt et placement du Québec - CDPQ for 30% and Hermes Infrastructure for 10%). As the Guardian reported:

"The French have understandably not prioritised saving a high-speed train service to a hostile island when they have a whole TGV network to sustain: the bailout money for French state rail company SNCF has largely gone elsewhere."

Therefore the two CEOs are also asking the British government to help, for example by reducing the access charge raised on Eurostar for using the high-speed track, which links London to the Channel Tunnel entrance (over three times higher per kilometre than on the continent), but also by allowing flexibility on the quarantine period imposed on travellers coming to London (currently 2 weeks).

Eurostar said in a statement:

"The new scheme of rates relief for airports puts Eurostar at a direct disadvantage against its airline competitors. Eurostar has been left fighting for its survival against a 95 per cent drop in demand, whilst aviation has received over £1.8 billion (€2 million) in support through loans, tax deferrals and financing. We would ask this scheme to be extended to include international rail services, and more generally for the government to incorporate high-speed rail in its support for the travel sector, and in doing so help protect the green gateway to Europe."

They have now written to Chancellor Rishi Sunak asking for financial help. Their plea is also supported by Rail, Maritime and Transport (RMT) union general secretary Mick Cash and by Anthony Berkeley, vice president of Allrail. However the Chancellors is reluctant to pour money into a company which is majority-owned by France and Belgium. In an interview to Le Monde, former Eurostar CEO Nicolas Petrovic said: "Eurostar is not French or British, it's a global train". Apparently the UK government agrees on the same line by refusing to help.

A collapse of Eurostar and HS1 would not only affect international traveller (even if most of them don't even remember the old routine of using planes or ferrys, a long time ago...!). It would raise serious questions towards the motivations of the UK government for the billions they are spending in HS2, the highly controversial investment from north London to Birmingham.

In addition, it would be a dramatic U-turn on the UK commitment to environmental issues. A Eurostar journey is 90% greener than flying (4.1kg of CO2 per passenger, compared to 63.6kg per passenger emitted by a London to Paris flight) and Eurostar is claiming to have avoided the equivalent CO2 of 60,000 flights in 2019 (or 750,000t CO2) and reducing noise pollution, congestion and traffic accidents. The UK will host the 26th UN Climate Change Conference of the Parties (COP26) in Glasgow in November 2021 and it would be a highly damaging signal sent by the British government on its environmental commitment.

A petition to the Prime Minister has been launched this week which attracted already more than 4000 signature. A petition needs to reach 10,000 to trigger a response from the government, and with 100,000 signatures it would be considered for a debate in parliament.

If not with Covid, Eurostar might derail with Brexit

Before Covid-19, Brexit was Eurostar's main concern. According to a Committee report published by the UK parliament in September 2020, the EU commission argues that to ensure the continued safe operation of the Channel Tunnel at the end of the transition period, the UK/France Treaty of Canterbury, which has governed the operation of the Tunnel since 1986, will need to be amended. The EU documents requires that the future agreement must apply all relevant EU law on both the UK and French sides and that if a future dispute arises, the European Court of Justice will be empowered to issue a binding ruling on the UK; and that if the joint UK/France authority fails to comply with the decision, or in emergency circumstances, France will be able to take unilateral action to regain control of its section of the Tunnel.

The UK government is, of course opposed to those proposals but, according to the British parliament itself, has failed to provide any alternative. In theory, not signing a new agreement means that the status quo will stay in place, but with no legal protection applying to the Tunnel, and therefore raising important concerns about the safe operation of the service. Time is running out warns the Committee.

"France will only be able to negotiate a deal based on that mandate, so if a fresh UK proposal is finally unveiled, which would likely suggest that an authority other than the ECJ be included in the deal, the European Council would have to sign off on new instructions. Further uncertainty and delays risk making life even more difficult for high-speed train operator Eurostar, which has been forced to scale back its services significantly due to UK government travel restrictions and quarantine measures in place."

A merger with Thalys for the future

Eurostar started running in 1994 and trains link London with Paris, Lille & Brussels via the Channel Tunnel at up to 320km/h (200 mph). The fastest journey between London and Paris is 2h15 non stop (some journeys may include stops at Ashford, Ebbsfleet, Calais Fréthun) and 2h01 between London and Brussels (often stopping at Lille in France). They operate 17 new ICE type trains from Siemens (e320), bought in 2014, and 8 older trains (e300) TGV from Aslthom, rebranded as the new ones and still 3 original trains.

In September 2019, the news came that SNCF and SNCB were planning to merge Eurostar with Thalys (owned 60% SNCF and 40% SNCB), in order to expand services between the UK, France, Belgium, the Netherlands and Germany. The merger was again confirmed in September 2020 by Thalys' CEO Bertrand Gosselin to be effective in 2021, according to BusinessTraveller.com. Eurostar and Thalys offer services that can differentiate substantially both in term of prices and in term of facilities. The operation will likely lead to a merge in the future offers, in term of services to passengers, prices but also material.

Under former CEO Nicolas Petrovic's leadership, Eurostar increased profits by compressing customer's services. In 2015, Eurostar threatened to require that cyclists dismantle bicycles before they could be transported on the trains. In 2017, they implemented more drastic condition for their frequent traveller programme, scrapping advantages on flexible tickets and raising the level of points required. They also reduced the compensation offered in case of delay, from free flexible tickets offered after 60 minutes, to no more than 25% of the value of the affected ticket. In 2018 they changed their policy to forbid spirits carried on board, which created a backlash on social media.

Questions will also come about the choice to buy Siemens Velaro (ICE based) for new Eurostar trains, instead of the Alstom TGV running in France and Belgium with Thalys. Decision to choose German Siemens for new Eurostar was announced in 2010 by M. Petrovic (just nominated in replacement of Richard Brown) for a contract worth £700 million. This decision made without consulting the main shareholder which faced a fait accompli, triggered anger from France: French Environment Minister Jean-Louis Borloo and Junior Transport Minister Dominique Bussereau said at the time they were "amazed" by the decision by Eurostar.

Currently, out of the 26 Eurostar trains, 17 are new and the company still operates 8 original Eurostar trains introduced when Eurostar first started in 1994. Those old Alstom TGV have not taken a simple make-over: they have been refurbished, making the interior nearly identical to the new Siemens train, and designated e300 - a reference to its 300km/h top speed. And although they are slighlty slower (top speed of only 300km/h in comparison to the 320km/h for the new trains), many passengers (and even staff) consider the journey much more comfortable than with the new "wobbly" trains, and their lighting is also better.

M. Petrovic, the architect of this "coup", left Eurostar in 2018, shortly after the Brexit vote announcing gloomy future for the rail company, to become... CEO of Siemens France! In 2010 he declared: "What is good for Eurostar is good for its clients". From what we know, the Siemens choice might not have been so good for Eurostar's clients, but definitely a brilliant operation for his career.