Back to school in Europe: how do the different countries manage? 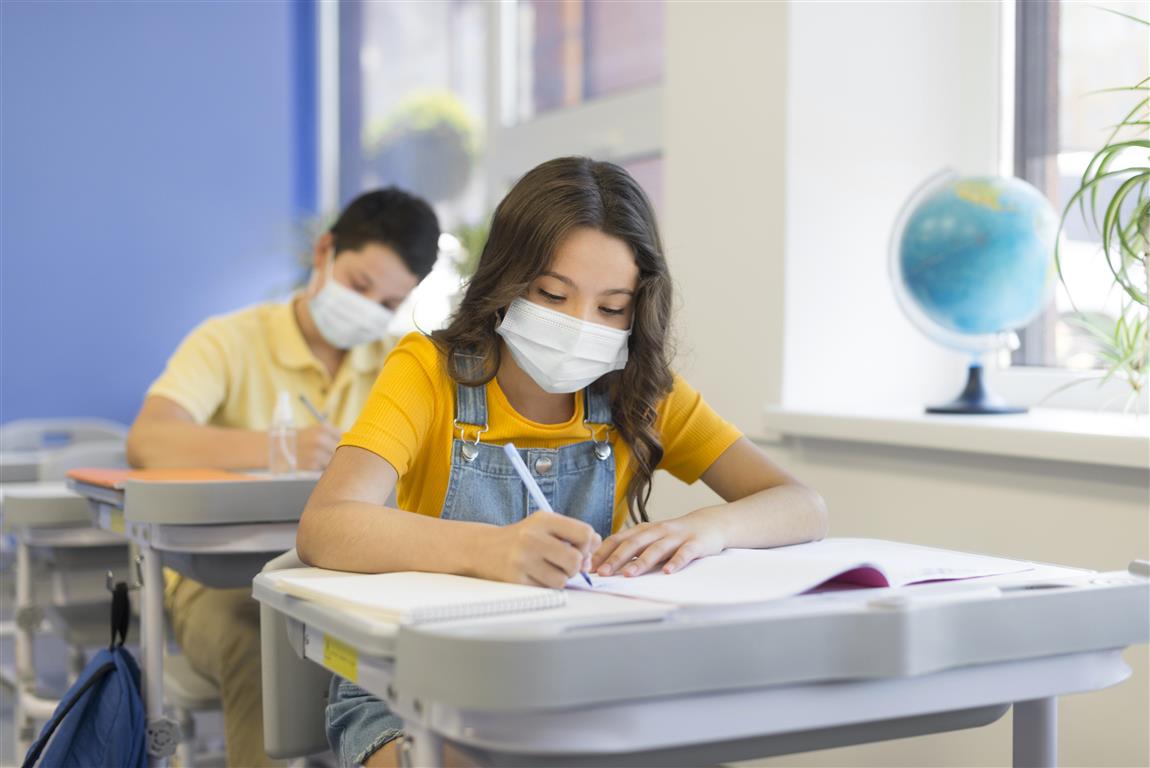 In many families across the world the main event of the last 10 days was kids going back to school. After a period of homeschooling followed by holidays during the last 5 months for most of them, we saw excitement for many, but also worries on the latest covid-19 measures. Let see what happens in some European countries.

Will there be a second wave for the coronavirus pandemic this autumn? The Covid-19 has already passed 900,000 deaths globally according to figures of the WHO and we hear constantly on national news that new cases have risen sharply recently in Europe, particularly in France and in Spain, but also Portugal, Hungary, Denmark...

The notion of "second wave" needs to be balanced by not only the fact that data of confirmed cases cannot be compared with the Spring period (when most countries were only testing in hospitals - thus graphs show a correlation between the number of people tested and the number of confirmed cases) but mainly with the absence of major impact on hospital until recently (30% more coming to hospitals than a week ago in France, but still 386 on September 9th, against 4146 on 31st March and 30 deaths on Wednesday against 499 on 31st March)

However, while most governments have been criticized 6 months ago for their lack of preparation, this is not surprising that safety protocols are implemented when millions of kids are meant to come back in person to attend lessons.

Bubbles (keeping children in groups and with as little contact with others as possible), small classes, staggered arrivals at school, mandatory masks, hygiene measures... depending on the age of the kids or students and the countries, the start of the school year was really different. European government have once again chosen not to publish concerted measures but to implement their own protocols.to welcome students back safely.

Classes have been reorganised into "cohorts" - groups of several hundred students. There are no social distancing rules within a cohort, but each group has its own area in the school grounds, cloakrooms and canteens. Due to the decentralised organisation of the country, Länders are mainly decision makers. Therefore it all depends on the regions, and in some states, both pupils and teachers will have to wear masks, while in others masks will not be required.

In Bavaria, for example, children need to wear masks at high school. In Hessen, another Länder, the Minister of Education presented a four-stage model for school organization. It is not based on the number of infections, but on the individual situation on site. The Frankfurter Rundschau gave an example: "If a wedding was the source of infection, as it was the case in Wiesbaden, the mask requirement does not have to be introduced in an entire school during lessons". However, six schools in Hessen have had to close again due to the corona virus since the start of the new school year, according to the newspaper.

Swedish children were also amongst the first ot go back to school, on August 17th. Sweden is following a more "relaxed" policy, in line with their previous decision not to lockdown their entire population and only closing high schools and universities (primary schools were never closed in Sweden). Schools re-opened as normal, without any specific protocol: masks are not advised, but hygiene measures and social distancing (when possible) have been put in place. They are aslo asked to stagger arrivals at school and children are encouraged to avoid public transports according to RFI.

Denmark was, with Norway, the first European country that allowed primary school children to return to classrooms after the lockdown. Primary schools reopened on April 15th and since the beginning of the school year on August, 9th, everything goes back full time, however with some specific measures: staggered arrival at schools, handwashing and cleaning throughout the day, keeping children in bubbles. Denmark has never had a very high level of infection.

The Education minister repeated numerous times during August that everything was ready for schools to reopen in September. Protocols have been updated on August 26th and cover all school domains of activities: lessons, lunch, sport, breaks and playgrounds...etc. According to the minister, rules are amongst the strictest in Europe, however it does not seem to be really the case when you compare to other European country protocoles. For the children this is a relaxed version of the rules under which some of them went back to school in May.

School reopened on a voluntary basis back last May, but it became mandatory in June. From September, there is no longer limits on class sizes and distancing is not compulsory if it would stop schools running at full capacity. In practice it means that most of the schools will run as normal, although high schools and higher education will make masks mandatory for everyone during lessons. On the other hand, kindergarten teachers will no longer be required to wear a mask.

But after one week already, more than 30 schools have closed again as teachers or students have been diagnosed with Covid-19. In some circumstances, the government has confirmed that in will be possible to be put on furlough in case of having to keep children at home.

Children are not back to school yet as it will happen on Monday 14th September; and actually they haven't had any classes even after lockdown measures started to ease in May. The Italian authorities have published a school protocol, including small classes, staggered arrivals at school, social distancing and mandatory masks (teachers will wear face shields as well), as well as buying 2.5 millions of individual desks. Outdoor teaching is encouraged where possible or in big spaces like theatres or museums. Distance learning is available for secondary school students who live with vulnerable family members.

The government also announced that they will hire permanent teachers on nearly 85,000 places (and more than 11,000 admin staff). However, according to Il Sole-24, a daily newspaper, "in Lombardy, out of less than 20 thousand authorized hires, only about 5-6 thousand will be able to be made. And the situation is no better in other regions of the North, Piedmont, Veneto, Emilia Romagna. From Rome onwards, already starting from primary school, mathematics professors, and generally of technical-scientific subjects, cannot be found; but also Italian, foreign languages, primarily English". The daily newspaper estimates that out of the 85,000 new positions, only 25,000 will be covered in the next few days, just under 30%.

Greece has decided to postpone the start of schools to from Monday 7th to Monday 14th September, in order to allow more time for self-isolation after families came back from holidays. Although they have not had as many cases as neighbourhood countries, they have decided to enforce a strict protocol for the start of the school year: masks will be mandatory, even for small kids attending primary schools. There will be also limits in class sizes (17 children max).

As in Italy and Greece, schools will reopen next Monday, 14th. In order to avoid the mixing of students, schools should be following the principle of ‘bubbles’. This means in practice that if a students of a certain class (bubble) becomes infected, the class only will be isolated, and not the full school. Austria will work with color codes: in red schools could close, in orange masks will be mandatory with green being the current situation.

School starts differently according to regions in Spain, between 4th and 15th of September. As reported by El Pais, "the director of the Health Ministry’s Coordination Center for Health Alerts, Fernando Simón, said that students will be able to return to class even if there is “community transmission” of the virus in Spain". Schools are encouraged to organise outdoor activities and stagger start, finish and break times. In order to avoid the mixing of students, schools should be following the principle of ‘bubbles’. Masks will be compulsory for over-sixes on school transport, and will be required for pupils and teachers if distance of 1.5m cannot be maintained, except for children in bubbles. Under the plans drawn up by the Health Ministry, education centres will only close if coronavirus transmission becomes uncontrolled, with quarantines for ‘bubble’ groups if cases are detected in students or staff.

The Spanish newspaper also said that "Simón offered a more temperate message at Thursday’s press conference. He highlighted that although some regions are seeing a noticeable rise in cases (for instance those along the Mediterranean coast) or are continuing to report very high infection numbers (mainly in Madrid), in other regions, such as Aragón, Catalonia, Basque Country and Navarre, the 'trend is stabilizing or even falling'".

All children are back to school with strict hygiene measures and the principle of ‘bubbles’ too. Some area are considering half school-days in order to welcome students in smaller groups.

The five-day week at school is again " the standard" in Belgium, according to a protocol that the government has labelled "yellow code", valid at all levels (nursery, primary, secondary, artistic education, higher education). This code means that from kindergarten through high school students will have lessons all week and that all students must wear a mask if the physical distance cannot be met. After the two month lockdown, schools reopened in Belgium but only for certain levels considered as a priority (situation similar to what happened in England).

The Ministry of Education specifies that "in municipalities where the pandemic situation is acute, it is possible to switch to a hybrid education corresponding to code orange (half-time in person/remote) exclusively for the second and third degrees of the secondary education. An exception is however made for the most fragile pupils who may always be invited to attend school in person ".

According to the Belgian media RTL, all students from all schools have gone back to Flemish schools, so that everyone can get to know their class and their school during the first week of lessons. However, each establishment will then switch to the educational regime applied within its municipality.

Mirroring similar requests in France, women's organisations have called for the establishment of specific furlough scheme for parents whose children are placed in quarantine following cases of Covid in their school.

All schools re-opened (in Whales schools can stay closed in case of cluster of confirmed cases of Covid-19). The full return to school applies to students and staff who do not have symptoms of Covid-19 and who have complied with quarantine regulations if necessary having returned to British soil.

The government has announced a plan of €375 millions to recruit 1000 permanent teachers for high schools and build new schools and extensions to accommodate social distancing.

All schools have reopened since June. All children are welcome except those showing symptoms of Covid-19. Teachers will still have to observe social distancing but this is no longer the case for students and masks are not mandatory.

More articles
Top 5 reasons why expats need to use a VPN
We have already detailed the use of a VPN and review many VPN services (including free ones) in a previous article. In ...
Global mobility collapsed and passport power rankings reshuffled, as a consequence of the Covid-19 crisis
Rules are constantly changing currently with countries closing borders or requesting people to quarantine amid arrival ...
Best Tips on how to Save Money while Studying Abroad
Being low on money is definitely one of the worst university experiences. ...