Best video call apps to use for work and socialising 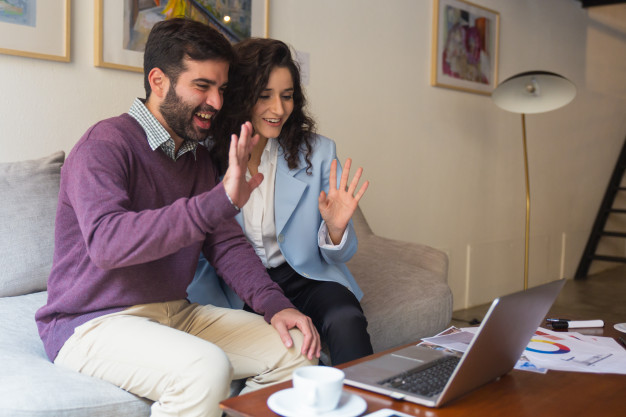 In a few hours, I have an "apero-time" with friends (a virtual apero, as it becomes the norm with the current corona virus lockdown). Earlier I spent 30 minutes on a video-conference meeting with colleagues at work, talking about the latest change in the delivery schedule of some projects.

Video call apps have become inevitable nowadays with the vast majority of the population in confinement and working from home. We list below some of the most popular best video conferencing tools that you could use.

In a few months it has become the most popular application with a reported 200 million daily users in March, up 20 times from the end of last year. Is is free for up to 40 minutes (but often extend for more nowadays) but with unlimited meetings (which means you can resend a link immediately for another meeting) and allows you to start or join face-to-face video calls with up to 100 people. Probably one of the nicest feature is the possibility to see all participants in similar tiles (hilghlighting the person speaking), which is usefull as soon as you have more than 10 participants.

You have also more features for company meetings if you pay: the most expensive tier gets you meetings with up to 1,000 participants, but there are cheaper options.

However, with popularity come criticism, as Zoom has been labelled a "security disaster" by some security analysts, which could explain why many companies have preferred to use Skype or Webex. CEO Eric Yuan said that the company was freezing any new features to the service for 90 days in order to concentrate on security and bug fixing. The company has also published guidelines to improve security of video-meetings.

Owned by Cisco, Webex is well know from professionals and widely used by companies running video conferences and webinars.You can run webinares HD video and broadcast-quality audio for audiences up to 3,000 and virtual events for up to 100,000 participants with expertise from Cisco Webex Webcasting.

As for Zoom, their main competitor before the COVID19 crisis, they have a free version with 100 participants, unlimited time and audio call-in (in addition to existing VoIP capabilities, participants can just call a number for free in 52 countries). Problably surprised by the sudden success of Zoom (seen as a cheaper version before), they have tried to react in upgrading their free version (only up to 50 participants before, and up to40 min limit). Other prices range from £11.25/months to £22.50 for 200 participants and the possibility for international calls with another £29.75/month.

As a Cisco product, they really focus on business, providing Webex Teams collaboration features as well as video conferencing.

Skype has been around for a very long time (now owned by Microsoft). Many company have bought the professional version but it's also a great tool for personal use. Skype can be used on iOS, Android, Windows and Mac, and offers video and audio calling, as well as a messaging feature.

However it is limited if you want to use it for large group meeting as it supports up to 50 people on the same audio call. But it allowssome nice features as adding captions and subtitles.

If you buy a Phone subscription (Skype Credits), you can call phone numbers around the worl directly from your Skype software. For example you can call the United Kingdom ~500 mins for £10.00.

The Google app offers high-definition video and audio meetings with up to 250 participants. An annoying feature however is the constant switch to the current person speaking on full screen and the other participants only visible in tiny boxes.

Only for Apple users, FaceTime is a popular App on iPad, iPhone or Mac. You can reach the user with a phone number or Apple ID and it works on Wifi if you don't have data connection. You can organise a group FaceTime with up to 32 people at once since OS12 in 2018.

The Facebook owned app has more than 2 billions users. You can use it both on iPhone or Android, as it works with a phone number. There is the possibility to use a desktop interface and a web interface, but this is limited to text messages then.

It has become very popular to make free phone calls (using Wifi) to anyone you are in contact with, wherever the person is. It is a great option for keeping in touch with family and friends worldwide.

With end-to-end encrypted, your messages and calls are secured so only you and the person you're communicating with can read or listen to them, and nobody in between, not even WhatsApp.

Houseparty is a video chat app owned by Fortnite developer Epic Games. Popular for aperitif and playing games,  Houseparty is a face to face social network. When you join the"house", your friends will be alerted and have the possibility to join too.The app is available for iOS, Android, MacOS and Chrome.

The app has seen massive growth in downloads since the start of March, according to data from Sensor Tower: it recorded 2m downloads worldwide in the last week of March, compared to 130,000 the same time in February.

Whereby is a flexible tool providing you with video meetings in the browser – no downloads & no logins for guests. However the free version is limited to 4 participants per meeting.

This app dedicated to friends and family combines texting, social media and video chats - all in one private, easy to use app.The main difference with others is that it allows to send video messages to individuals or group chats, which the other parties can watch and respond to at their leisure.

As advertised on their home page, the COVID19 crisis is an opportunity for Microsoft to promote their Office 365 tool to companies and schools around the world. They offer sign up for free for the entire school resquesting. Otherwise, Office 365 business plans that include Teams start at $5/user/month.

However for personal use they redirect to Skype (see above).

For Facebook addicte, you have the popular Messenger. It's primarily used for sending messages, but also includes a video chat option.

It's a fully encrypted video conference solution that you can use without creating an account and allows you to share desktops and share messages while you chat.

Depending on your needs (and the requirements from your company) choose the best app as we have now plenty of choice... just imagine a few seconds if the same crisis would have happened 20 years ago...

More articles
How a Covid-19 vaccine will impact us
As the vaccine race continues, we see more players emerging in the Covid-19 eradication marathon. An increasing number ...
Healthy habits that we got during the pandemic and we should keep
While trying to adapt to the new normal imposed by the Covid pandemic, people came up with different ways of coping with ...
What can expats expect in 2021?
The year 2020 has been a challenging one to say the least. Consequences of all the lockdowns and job losses will have ...
Happy New Year 2021!
All the team (editors, moderators, networkers) wish you a much better year 2021 than the past one and we look forward to ...