From the UK to Oman: Tony Walsh

Hi – I’m Tony, one of millions of Tony’s from around the world. I was born in west London, England,  and that city was the focus of my life until I moved to work in Oman. I lived in Muscat, Oman, and lived there and in Saudi Arabia and the UAE for three decades.

1.    Why did you move abroad?
It was a natural step from working in England where, though I had a good job, I felt restricted in how I could develop the business; I guess I was a candidate for being self-employed but didn’t know it.

2.    How did you make a living?
Like many people who have become an ExPat, I have done a variety of jobs. Initially, I worked in the same business as I had done in England, retail. I managed BHS (British Home Stores – similar to JC Penny in the USA) in Saudi and private retail business in Oman.

I then took the plunge and set up my own business in Oman, again in retail where I had a perfume and cosmetics importer, wholesaler and retailer. Along with perfumes I also managed the Disney store franchise ‘Disney Corner’ until Disney closed all their franchises in the Middle East. Operating a ‘bricks and mortar’ store meant that I was impacted by all the changes in Oman’s economy, one year it shrank by 20% due to oil price drops.

Not surprisingly my business was impacted and I gradually moved into tourism. But that move was bad timing, as soon after I closed the retail business tourism worldwide was impacted by 11th September attacks in the USA. This was especially felt in Oman as all our tourists flew in and we were an Arab country.

However, good fortune also arrived for me in the form of the United States Air Force (USAF) as part of their operations in Afghanistan and Iraq. I organized a meeting with the contracting officer in one of their two air bases and was asked to tender for a contract; I did tender and got the contract. Even though this was my first contracting business I had two advantages, I really understood the level of work the USAF needed and I understood something of how Oman’s construction business worked as I had constructed shops. I received many subsequent contracts both in the original airbase and their other one.

After the USAF relocated away from Oman I was fortunate that my tourism business was again receiving tourists and so once again focused on that. Connected with this business I have written several books, including commissions from the Ministry of Tourism in Oman for their own booklets.

3.    How often did you communicate with home and how?
When I first arrived in Oman communication was usually by ‘snail mail’ as this was pre-internet. Phone calls or even faxes were possible but horrendously expensive so I only really used these for business. Life changed when the internet was introduced into Oman in the mid-1990s and soon after mobile phones also became available. Communication for business and personal communication has always been important for me so eMail and WhatsApp are critical.

4.    What's your favourite thing about being an expat in Oman?
The best thing really has been two things firstly the attraction of the new and then the challenge of doing business in a very bureaucratic business environment.

5.    What’s the worst thing about being an expat in Oman?
For me, as a self-employed person, the worst thing was also the bureaucratic nature of Oman, which is deeply ingrained in the country.

7.    What did you do to meet people and integrate in your new home?
I was fortunate in two areas when I lived in Oman. My work has always been people oriented, in retail and tourism I was introduced to so many people as a result. The other area is the very engaging and welcoming nature of Omani nationals and I found that a welcome was given to strangers throughout the country.

8.    What custom/ habits do you find most strange about your adopted culture?
Strangeness can also mean unexpected and one on the most unexpected habits I found was that of neighbourliness. I lived for a few years in a small village, where I was the only European; whenever I was home for lunch I would receive a knock on my front door and a tray with a meal was handed to me. It was unexpected in the extreme for me and an example of how hospitable the population is.

9.    What is a myth about your adopted country?
A myth about the Arab world in general and one that I have never experienced is that it’s a dangerous place to live in or visit. Of course to some extent I have visited places at the right time, for example, Syria or Yemen, however, there is an innate welcome from people in general that it may well be that the people who experience hostility are in fact themselves hostile.

11.    What advice would you give other expats?
I would suggest being open to new experiences and taking time to try and understand and mix with the nationals of the county you live in. 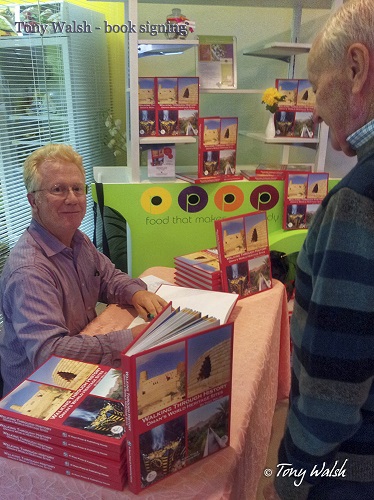 12.    When and why did you start your blog?
I started the blog in 2006 for a number of reasons. Initially it was part of my tourism business website, however, that blog crashed or was hacked so I moved it over, manually, to a Wordpress dot com site and then exported it to my self-hosted domain. The ‘slant’ that I gave it was a positive viewpoint, particularly about Oman; simply because at the time so many blogs were about negative points of view on the country that I really wanted to show a different side to it.

To find out more about living in the Middle East, refer to our