From Germany to Jordan: Living in Jordan as Expat 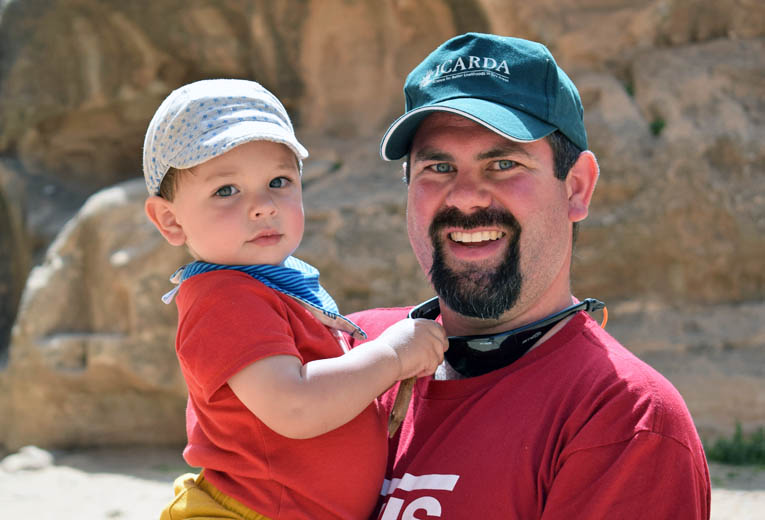 I am Bastian from Germany, currently living in Jordan with my family.

1.    Why did you move abroad?
It is a combination of several aspects. I was looking for a new job, I have lived and worked in Jordan previously and I wanted a new challenge.

2.    How do you make a living?
I am employed at an International Agricultural Research Organization.

3.    How often do you communicate with home and how?
Actually, not that often. Although there is usually only 1 hour time difference, due to a busy family life with young kids it becomes difficult. But it also depends on my friends and parents’ attitude towards this.

There are so many apps but everybody uses something different. Some of them are blocked for VoiceoverIP calls, but you can use some others. With Skype you can also call landline or even mobile phones for a reasonable price.

4.    What's your favorite thing about being an expat in Jordan?
Luckily, sun is shining more than 320 days a year here and mostly there is a blue sky with a dry climate. I love Jordanian weather. Food is great and you can get almost everything here that you need. There are very nice hikes and with the Jordan hike going from the North to the South of the country so is so much more to explore.

5.    What’s the worst thing about being an expat in Jordan?
The Outdoors are not very green, at least in Amman. There is not much infrastructure for walking or cycling in the city and barely any parks for kids, no public transport. However, things are changing and more outdoor playgrounds and other spots for outdoor activities are developing. Unfortunately, Jordan is also quite expensive.

6.    What do you miss most?
Enjoying a beer with my friends.

7.    What did you do to meet people and integrate in your new home?
Since I have a family with 2 little kids, I do not have much time for myself. However, I have colleagues from all over the world and I also do have a few Jordanian friends. There a few German colleagues/friends as well but I do not hang out as much as I would if I would be single. But that’s OK.  But if you want to there is plenty of ways to approach that through sports or other activities advertised on Facebook or elsewhere.

8.    What custom/ habits do you find most strange about your adopted culture?
Driving is exhausting. Nobody cares about rules or safety. I will never get used to the carelessness. However, there is also some flexibility that I would not have back in my home country.

9.    What is a myth about your adopted country?
Jordan is not dangerous although people might expect that. Also Jordan is not so modern as you might think or as it is portrait sometimes. I find it pretty conservative in many aspects.

10.    Is the cost of living higher or lower than the last country you lived in and how has that made a difference in your life?
That depends. I would say it is pretty much similar. The difference is however that in Germany most of the money is taken away before it even arrives on your bank account due to high taxes, social security, all kind of mandatory insurances but in Jordan you pay at another end. Everything is more expensive here, from rent over dining out, clothes, toys, cheese or alcohol.

11.    What advice would you give other expats?
In Jordan you need to be on Facebook if you want to know what is going on. I discovered so many things that otherwise I would not have been aware of. From events, activities, places to see and restaurants.

12.    When and why did you start your blog?
I started my blog during last year. This year in February 2018 I moved to Wordpress and have been posting regularly since. I am trying to capture my own experiences. I want to write about places so people know what to expect. I do not just give ideas or recommendations; I rather report on something that I actually have visited myself to give a true picture.

Living in Jordan as Expat