1. Why did you move abroad?
I’m a scientist and all the academics kept telling me that to progress in my career I should go and work overseas for a bit, because international experience is supposed to be important for your CV. I chose a position in a good lab in Germany, and only intended to stay two years, but time flies and now I’ve been here almost four years (and met and married a Czech guy in the meanwhile!). My husband is a software developer and Berlin has a really big startup community, which is why he came to work here. His home in the Czech Republic is only 5 hours away by car, so we go there for the weekend every one or two months.

2. How do you make a living?
I’m still doing a postdoc and the lab I work in is not so different workwise to the one I was working in at home, although at home we worked together more often whereas here everyone has their own separate research projects. The lab is international with postdocs from many different countries, and it’s been a good opportunity to learn about countries and cultures that we don’t hear much about at home.

4. What's your favorite thing about being an expat in Berlin?
I sometimes joke that my favourite thing about Berlin is Brandenburg (the countryside around Berlin, which is actually a different state/province). This is because I’m not really a city person and I find Brandenburg very beautiful, but actually I’ve come to like a lot of things about Berlin too, such as the variety of cafes, restaurants, festivals, markets and events. I’ve also enjoyed experiencing four very different seasons: the amazing colours of autumn, freezing winters with snow, all the blossoms of spring and best of all summer, when it stays light until late and everyone is out and about at parks, street cafes and the lakes. Living in Berlin, it’s also very easy to travel to other countries in Europe and discover different places, even over the weekend. I also enjoy riding my bicycle here, as it’s mostly flat and there are good bike lanes.

5. What’s the worst thing about being an expat in Berlin?
The funny thing is that I don’t notice the differences so much anymore. In the beginning there were a lot of things I found strange, and I remember that I found it hard to live in such a big city after coming from a more suburban city like Cape Town. I also missed the warmth of the people in South Africa. However one of the worst things I would say is that I seem to get sick a lot more here than I did at home. I’m not sure if it’s because there are just different germs going around here that I haven’t had before, using public transport more, or having less sunshine. Maybe it’s a combination. In my first year here I counted that I had eight really bad colds! I seem to get sick less often now that I ride my bike more than taking public transport, but I still get sick more often than I did at home.

6. What do you miss most?
Apart from family and friends of course, I really miss the mountain, as I used to go hiking a lot. I also miss the sea, the sunshine and the deep blue skies. Another odd thing I have found myself missing recently is the sound of Cape Town winter storms with rain and wind – when it rains here we hardly hear it in the apartment, and I used to like listening to the rain on the windows. Sometimes I also miss my car.

7. What did you do to meet people and integrate in your new home?
There’s an online platform called “Meetup” which people in different cities use to form groups and plan events. Soon after I moved to Berlin I joined some groups such as walking and photography groups, and attended some events. This was a great way to meet new people, usually expats but also some locals. I also met people through my German language class and through dance classes at the universities (the German universities host sports classes which externals can also join). For integrating into a new country, I think that learning the language is key. It’s so much better when you can understand what’s going on around you and communicate with people. Taking part in local events and activities also helps you to get to know the culture.

8. What custom/ habits do you find most strange about your adopted culture?
This is probably also something I don’t notice so much anymore. I do find it strange that smoking is so popular in Germany even though Germans are otherwise very health conscious. Another interesting thing is that although work colleagues often don’t greet you when passing you in the hall, everyone always greets everyone (even strangers) when getting in and out of lifts. In Germany (and other parts of Europe), naked mixed-sex saunas are also the norm and it’s not unusual to find people swimming naked in lakes or at the beach, which you don’t really see at home.

9. What is a myth about your adopted country?
I think there’s a bit of a myth that Germans are rude or unfriendly. Actually in general they are nice. I think sometimes politeness just gets lost in translation, as there are different ways of expressing politeness in different languages and cultures. Often Germans will tell you what to do, but they are trying to be helpful, not criticizing. Also I’ve noticed in online forums that a lot of British people seem to think Germans want to rule Europe (probably because of the war history). It’s not actually like this at all, and most Germans I’ve met like the British and were sorry when they decided to leave the EU.

10. Is the cost of living higher or lower than the last country you lived in and how has that made a difference in your life?
Berlin is one of the cheaper European cities, and interestingly some things are even cheaper than in South Africa, for e.g. toiletries such as shampoo and shower gels.  There is usually always the option of a cheap brand that also has pretty good quality. Other things are slightly more expensive than in South Africa. Overall when you take into account the price of things versus the salary I think you can live a bit more easily in Berlin, although property is much more expensive so most people rent. People tend to eat out a lot here as there are lots of restaurants and many of them are relatively inexpensive. There’s also a very good social system here based on taxes, so everybody can be sure of a pension, health insurance, cheap childcare and free education, and all of these things make a big difference to people’s lives. As a postdoc in South Africa you don’t get pension or health insurance. Overall the cost of living here makes a difference to my life because I can send money home to my family and still have enough to live comfortably.

11. What advice would you give other expats?
Try to learn the local language and join events or classes to meet other people as soon as possible. Life in a new country is so much more fun with friends, and other people will introduce you to lots of places in your new country that you otherwise wouldn’t find out about. 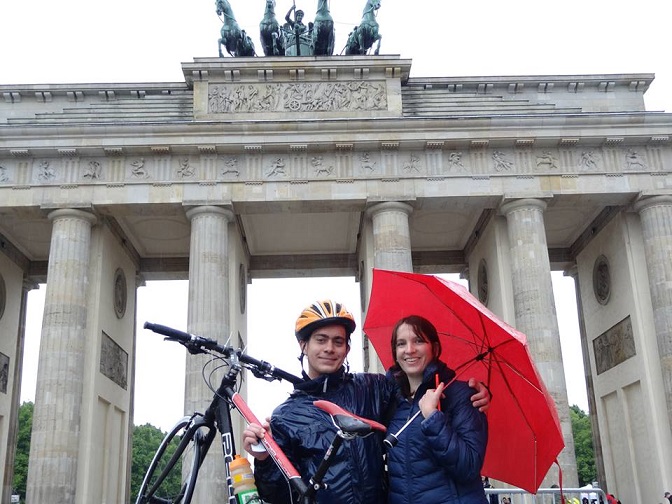 12. When and why did you start your blog?
My husband actually encouraged me to start a blog when I mentioned that I used to keep travel journals and also have a lot of travel photos that I’ve never sorted out. Since we’ve been together I never have time to write in a journal, so now I try to organize my photos and experiences into the blog instead. It’s been going almost two years now, I just wish I had time to post more often.