From Pakistan to Germany: A Pakistani in the Bundesrepublik 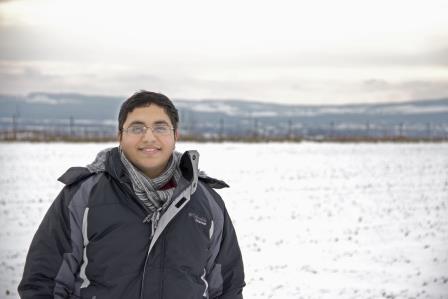 My name’s Kamran and I come from Karachi, Pakistan. Karachi is a huuuuge city of about 20 million people and growing and is Pakistan’s largest. From Karachi, I have moved to a tiny town in Germany with a population of 50,000. It’s located on the Rhineland and is near(ish) to Düsseldorf. It’s the sort of city which abruptly ends and gives way to the countryside where there are more cows than people.

1. Why did you move abroad?
I moved abroad to study. Actually, Germany wasn’t even on my list of countries to apply for my Masters degree. It just happened by accident. I call it the best accident ever.

2. How do you make a living?
I am currently doing a student job and applying for regular work since I am a recent graduate. Working in Germany has been a really great experience. It is one of those countries where many opportunities exist for expats. You just have to go look for them. Workplaces in Germany are usually really multicultural and you will find either an expat or a person with a foreign background working beside you. It makes the experience all the more interesting since you don’t get into contact with just one culture, rather a great mix of many.

3. How often do you communicate with home and how?
In the beginning my parents would call me once every two days! At some point, I had to tell them to take things down a notch. (Un)Fortunately, they have now discovered smartphones and call me on my phone using various VoIP apps. I do miss them and my siblings as well, don’t get me wrong. But I love the personal space I enjoy here. Pakistani parents are known for being loving to the point of driving one to move abroad. Hence the size of our expat population worldwide. Jokes aside though, I miss that atmosphere of a big family and everybody sitting down together for endless chats over the most delicious food known to man.

4. What's your favorite thing about being an expat in Germany?
Definitely the multiculturalism. With Germany, one gets a package deal: you live in Germany and experience the culture of the world. There are few countries in the world with as many cultures living side by side in harmony. I love it! One can have friends from all over the world. Aside from that, Germany is where my fiancé (and soon to be wife) is from and that just makes me partial to the folks here.

5. What’s the worst thing about being an expat in Germany?
Hmm. This is a tough one. I guess it’d have to be the fact that Germans are too strict with rules. Don’t get me wrong, I am all for a rules and regulations based society. But, one should retain one’s humanity as well. And humans aren’t the most perfect of beings. Germans tend to forget that from time to time. But then a train strike happens and Germans remember the world is a chaotic place after all.

6. What do you miss most?
The food! Pakistan has the best cuisine in the world! Fortunately, though, I have expat friends who can cook delicious Pakistani food from time to time. Of course, they have to be coaxed into agreeing first. As I mentioned before, I miss family life too. I come from a big extended family and am close to all of my cousins. I miss them not being here with me.

7. What did you do to meet people and integrate in your new home?
I try to converse with people as much as I can. With Germans, I try to talk in German. One thing about the Germans is, they will encourage you to talk in their language even if you are making the most basic of mistakes. They recognize that life is too short to learn their language (well said, Mark Twain) and they appreciate the effort. And a lot of Germans love speaking in English too, even though they speak it much better than many native speakers of the language. As far as non-Germans go, I have friends in the university here. The university is quite international and I have friends from 10 countries!

8. What custom/ habits do you find most strange about your adopted culture?
The lack of fans and air conditioning. Germans are not prepared for this, even though they are prepared for any kind of weather generally. I know summer comes to Germany for only a few weeks a year, but still, some air conditioning in public transportation wouldn’t hurt. We had a heatwave recently and I can tell you it was awful. Thankfully, I identified strategic places in my city with air conditioning and would just hang around in those locations when it was too much to bear.

9. What is a myth about your adopted country?
I’m gonna go with the Lederhosen and Drindl here. That dress is native to the southern German region of Bavaria. However, most foreigners think Germans spend their entire days skipping around on Alpine slopes in their Lederhosen and Drindl, yodeling at the top of their voices. Another misconception is that all of Germany is like Bavaria. In fact, the country is really diverse and Bavarians don’t consider themselves German. Unless, of course, Die Mannschaft (the national football team) wins the World Cup.  Then the Bavarians are the über Germans.

10. Is the cost of living higher or lower than the last country you lived in and how has that made a difference in your life?
Pakistan is the last country I lived in. The cost of living is quite high in Germany as compared to back home. However, you also get a much higher quality of life on average here than you would in a developing country like Pakistan. This also means that one has to earn higher wages in order to make a decent living in Germany. As a student, there is a certain amount the German government requires me to have in my bank for my monthly expenses. To make ends meet, I work part time and make do. Germany has a very nice culture of discount super markets which are actually quite good in terms of the wares and you get your money’s worth. However, I have learned a lesson while living here: if something is cheap, there is a reason for it.

11. What advice would you give other expats?
Learn the language and try the Sauerkraut. German is really important when living in Germany. Most expats, moan about the language being hard to learn – which is true – but one cannot change the society one lives in; better to adapt and integrate. There is no use fighting the German language. Let the ridiculously long words wash over you. The second, and equally important, thing is to give Sauerkraut a shot. Coming from Pakistan, Sauerkraut is one of the most alien tastes for me. But I love the thing! It’s amazing. That said, I am not at all into the Sauerkraut Juice they sell at the supermarkets here. That’s just plain weird.

I started my blog in 2014. I had many observations about Germany and Germans and would often comment about things here. My fiancé and some friends suggested I write a blog about my life and observations. I checked and saw that Pakistanis aren’t blogging much about their experiences in Europe and decided to give it a try. It has been a great experience so far and the response has been overwhelmingly positive and humbling. Unfortunately, at the moment, I am really busy with some stuff and haven’t posted since a month. But, a new post is right around the corner.

Kamran's blog, A Pakistani in the Bundesrepublik