Hello! My name is Meredith and I am from Vancouver in beautiful British Columbia, Canada. I currently live just outside of Stuttgart in southern Germany. Shortly after moving abroad, I started writing my blog Kaffee und Kuchen to describe my experiences living as an expat in Germany.

1. Why did you move abroad?
After five and a half years of being in a long distance relationship, I moved to Germany in 2013 to live with my German fiancé. After being apart for so many years, we are now happy to be married and living together in Germany.

2. How often do you communicate with home and how?
I am in touch regularly with my family and friends from home. I email my parents and siblings at least once a week and we occasionally plan Skype sessions on the weekends. It can be hard to find convenient times to chat with the 9 hour time difference. With my friends, I usually keep in touch on Facebook or WhatsApp because it’s so convenient. I also love to send letters and postcards home, especially when I’m travelling.

3. What's your favorite thing about being an expat in Germany?
After living here for almost two years, there are so many things that I’ve come to appreciate about living in Germany. For starters, there are tons of festivals, markets, parks, hikes, beer gardens, vineyards, galleries, museums and castles to explore all over the country. Public transportation, especially train travel, makes it easy to get around. Germany is a great jumping off point for travel all over Europe.

6. What did you do to meet people and integrate in your new home?
In an effort to make new friends, I started getting involved with the expat community and the local community. I joined some online expat communities before moving to Germany and a few more once I arrived. These groups offer resources to learn more about renting an apartment, getting a German driver’s license, travelling around the country and German culture in general. They often organize meet ups at local events where you can get to know both locals and expats.

I also started volunteering with an organization that helps German high school students practice for their final English communication exams. It’s been a nice way to meet other English-speakers and meet Germans as well.

7. What custom/ habits do you find most strange about your adopted culture?
One thing that comes to mind is scratching a coin on a parking machine (or ticket machine) if it’s not initially accepted. Everywhere you go you’ll see scratch marks above the coin slot. I asked my husband about this and he laughed and said he doesn’t know if it’s to make the coin smoother so it’s more likely to be accepted or just a little superstition. It baffles me!

8. What is a myth about your adopted country?
People often associate Germany with excellent beer, but the southwest part of Germany is better known for its wines. I live in the Württemberg region which is one of the largest wine-producing regions in all of Germany. In the summer and early fall there are all kinds of local wine festivals and walking wine tours taking place.

9. Is the cost of living higher or lower than the last country you lived in and how has that made a difference in your life?
I would say that the cost of living is quite a bit lower in Germany than in Canada. Rent and groceries especially come to mind as being more affordable. I am still surprised to see how inexpensive dairy products like milk, yoghurt and cheese are in Germany compared to in Canada.

10. What advice would you give other expats?
Learn as much German as you can. Though many people speak English, being able to speak and understand German will greatly increase your quality of life and will make it easier for you to make friends, understand more about your surroundings and integrate into German society. 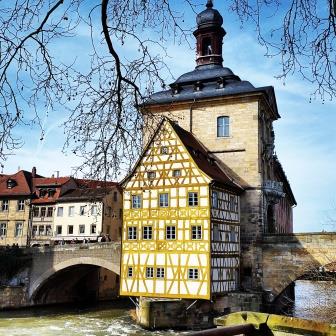 I started blogging about a week after moving to Germany in August 2013. I thought a blog would serve as both a personal journal of my time in Germany as well as a place for family and friends to read about my experiences as an expat. It’s also been a great learning experience and creative outlet for me. This year I attended my first blogging conference in Berlin called The Hive and met some amazing bloggers from all over Europe. I love meeting other bloggers (both online and in person) and sharing ideas, tips and inspiration. Blogging is booming and there’s always something new to learn!