From the Ukraine to London to the Czech Republic: TinyExpats 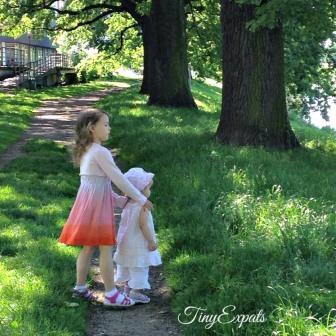 My name’s Yuliya and I’m Ukrainian. I left home at 17 and moved to UK to study. In the following 15 years I got married to a Russian, had two daughters, moved around between UK, Germany, China, Russia and Czech Republic, where we’re all based at the moment.

1. Why did you move abroad?
Just after I graduated from school in Ukraine, my parents sent me to London to get a degree. I lived there for 7 years, first as a student, then as a young professional. My husband and I met while attending the same business school. He had a job opportunity in Germany and that’s how I became a trailing spouse. We continued to relocate partially to help him with his career growth, but also because we enjoy travelling and experiencing new countries.

2. How do you make a living?
At them moment, I’m a stay at home mum and our youngest daughter is just 2. My blog provides me with an outlet for my thoughts and helps me not to get completely engulfed by life with small kids. I love being a mom, but doing something for myself is vital for keeping my sanity at times.

3. How often do you communicate with home and how?
Modern technologies are great for keeping in touch! When I first left home, international calls were very expensive, so you really had to watch how much you could chat to your family. Now, I talk to my family every day via different messengers, we Skype a lot with grandparents to let them interact with the kids. Although, I don’t get to see my family in person as often as I’d like to, talking to them online helps a lot.

4. What's your favorite thing about being an expat in CZ?
I love being an expat here! I think, it’s my most favourite expat experience so far. The country is beautiful and quite small, so you can drive all around it, exploring all the cute little towns and wonderful landscapes (I always say that there’s more to Czech Republic than Prague! If you plan a visit - get out of the capital and see other CZ destinations as well! ). People are friendly, food is very similar to what I’m originally used to. Weather is mild, but rather sunny and warm. I’m in love with this place.

5. What’s the worst thing about being an expat in CZ?
That’s a hard question as I’m pretty happy with everything here. The only thing that should be improved - levels of income. Cost of life in CZ is lower than in some other European countries, but so is the average wage. We had higher income level in Moscow (although, life there was more expensive as well). On another hand, quality of life for us is better here, less stress and more family time, which is why we made the decision to move anyway.

6.  What do you miss most?
Depends what country you are talking about :) It was nice to be close to relatives, when we lived in Moscow (where my husband’s from) or in Shanghai (where my family currently lives). I often missed some of the food items, which I was used to as a child, but food in CZ is quite similar to what I had in Ukraine. My husband seriously misses hot Chinese food, though. II really liked that getting domestic help in Shanghai was very affordable - who can say no to being freed from household chores?  I also miss London, as I spent my student years there and it would always hold that sentimental value.

7. What did you do to meet people and integrate in your new home?
First time I moved to become a student and that always means you’re about to meet tons of new friends. Isn’t that the best time for new friendships? When we moved to Hamburg, there were luckily several people we studied with already living there. Later on, my kids were the main social helpers - I met a lot of great moms thanks to them. Recently, I also met some people thanks to my blog - another positive thing about it.

8. What custom/ habits do you find most strange about your adopted culture?
Czechs are also Slavic, as Ukrainians, so we have quite a lot in common. It was much more eye-opening to learn interesting facts about Chinese customs and traditions, when we lived there. For example, I was surprised to learn that daughters are considered to become part of the husband’s family, therefore, there’re even different names for paternal and maternal grandparents - maternal grandparents translating a bit like ‘outside grandparents’, as they’re outside the family. That is why it is often considered more desirable to have sons, as daughters will become a part of some other family in the future. Anyways, coming across that curious traditional perception didn’t change the fact that I love having two daughters of my own.

9. What is a myth about your adopted country?
Hm.. When people think about CZ, they mainly think about Czech beer and hockey. What can I say - it’s true! Czechs statistically consume the largest amount of beer per capita in the world. And they are real fans of ice hockey - we live near an ice arena and can witness it on a regular basis.

10. Is the cost of living higher or lower than the last country you lived in and how has that made a difference in your life?
It depends what you would compare it to. It is definitely lower than cost of living in UK. In comparison to Moscow, it is mostly lower as well, but Moscow does not necessarily represent Russia, it is an expensive cosmopolitan city. As I said before, average salary is also not that high, so as long as you spend inside the country it’s all fine, but buying international flight tickets, for example, makes you see the difference.

11. What advice would you give other expats?
Get out and explore! There’re so many interesting things to do in Czech Republic - hiking and skiing in the mountains, walking in the woods, exploring medieval cities, tasting endless types of beers, visiting various spa towns with mineral springs. It is also easy to travel to other countries from here, as it’s located pretty much in the middle of Europe.

12. When and why did you start your blog?
I started blogging in November 2014. Initially, I wanted to use my blog to collect any kind of useful information for other expats with kids relocating to Pardubice - it’s a small town and there was not much information to be found in English about life here, when we were planning our move. It somehow grew to a place, where I would write about our travels and expat life in CZ and beyond, discuss third culture kids issues and invite other expat mothers to share their experiences. TinyExpats blog helps me to find others in similar situation to ours, to learn from their experiences, and, I hope, it could also help other expat families to adjust to this life style.

To find out more about living in the Czech Republic, refer to our