From temporary to permanent - what if you wish to settle down? 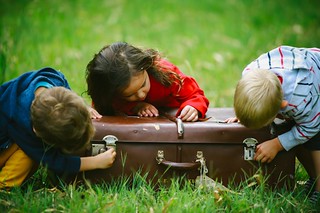 Usually, talking about expat issues, we discuss situations, when they are living abroad temporarily, thus learning to adjust, but not necessarily adapt in a long run. What if you relocate with a plan to actually settle down and make this new place your permanent home? Well, then, of course, it's quite a different matter.

Learning the local language becomes a must, you would most probably choose a local school instead of an international one, your social life would hopefully spread out beyond the expat circle. I've talked to an expat mother, who moved over from Switzerland to Australia with her husband and a kid (their family grew in Australia and now they have two children). They relocated with a plan of settling down and that directly influenced their choices concerning adaptation of their kids.

Please, tell us more about your kids - where were they born? Have they moved?

Our son was born back in Switzerland and has moved with us Down Under. Our daughter was born in Australia.

How did you handle the relocation of your child? Any preparations to make it easier to accept?

As he was still very little it was pretty easy. He never missed anything. We always talked about the great things he will discover in Australia, so he was excited to finally get there.

Living in Australia for such a long time already, what national identity would you say is the closest for your kids? Are they Swiss or Australian?

My kids clearly consider themselves Australians with Swiss back ground. But if they would have to choose a citizenship, they would choose the Australian. Luckily dual citizenship is not issue for us.

Are their friends local or fellow expat kids? Do they find it easy to fit in?

Most of their friends are local. Some of them though have lived abroad as well or did move to Australia and became either permanent residents or citizens. They never struggled fitting in. We never did. But then the cultures are not different really.

How do you bring your own cultural background into your kids’ lives (fairy tales, language, literature, etc)?

We speak Swiss German and some of the stories we tell are Swiss stories. We celebrate Swiss National Day and on the December 6th is 'Samichlaus Tag'. It's when Santa comes and then on Christmas he comes back again... There are some typical Swiss dishes we cook every now and then.

Any advise for fellow expat parents?

I think it is important to know what you want in the long term. I don't want my kids to totally disconnect with Switzerland but I don't want them to feel they are somewhere in between either. I want them to feel they belong. The most important thing I believe is that the kids feel like they can settle (if that is possible). For us it was always clear that the goal is to stay in Australia, so we all settled. I know it might not be the case for most of the expat families out there as they eventually will move on. Still, while you are living somewhere, try to settle, don't fight it. Maybe it will make it harder when you leave but it will make it easier for you while you are there. And of course for the kids...

You can read more about life of this expat family on A Momma's View blog, containing a lot of interesting posts about expat life, homeschooling and healthy lifestyle.

If you are considering relocation to Australia, check Easy Expat guide for Sydney/Australia.

Yuliya, author of Expat Kids blog on Easy Expat, is also the author of TinyExpats.com, writing about expat life and travels of their nomadic family, sharing their journey with two tiny expats.

More articles
Full update on the guide for expatriates in Budapest
We have updated our guide for Budapest. The guide has been fully reviewed and data has been updated and many links ...
Testimony: Expat life in London during the Coronavirus Pandemic
BlogExpat.com has decided to collect testimonies from expatriates experimenting the effects of the Covid-19 ...
Brexit & Coronavirus: When the UK realise that they need EU migrants
One of the major argument used by Brexit supporters was the need to stop the "invasion" of ...