From the USA to Brazil: Coconut Water 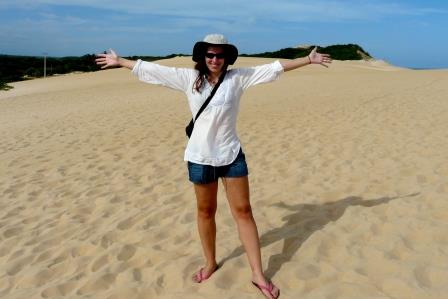 1. Why did you move abroad?
I was finishing my Master’s degree and working for the Hubert Humphrey Fellowship Program, a Fulbright Program specifically for midcareer professionals from developing countries to network for a year in the US, and one of the fellows was an incredibly handsome and brilliant judge from Brazil.  I helped him open a bank account.  We had a few lunches.  A year later I was moving to Rio and two years after meeting, we got married.  Now, we live in Vitoria, Brazil with our daughter.  This all makes me sound like way more of a risk taker than I actually am.

2. How do you make a living?
Well, my first year in Brazil I spent alone in my apartment watching Grey’s Anatomy reruns. Ok, that’s an exaggeration.  I didn’t watch only Grey’s Anatomy; I watched Sex and the City too.  I didn’t speak a single word of Portuguese when I arrived, and the only person I knew was my husband who had a full time job that wasn’t babysitting and arranging play dates for me.  The child metaphors really aren’t an exaggeration.  Being unable to talk to or contact anyone is exactly a small child’s reality. Only you have the brain of an adult.  It sucks.  I tried writing and eventually got one article published.  That led to classes for students writing application essays for American universities in conjunction with the Education USA office in Rio.  The writing classes eventually led to a high school teaching position in Vitoria.  I taught for four years and have just recently left to focus on writing. My self-esteem is now strong enough that I don’t need a regular job and can emotionally handle letting my husband support me financially while I work on getting my first novel published.  I’m very excited and happy to be committed to writing but it took almost 8 years to reach this point.

4. What's your favorite thing about being an expat in Brazil?
My favorite thing about being an expat in Brazil…it’s a tie between the weather and the food.  I know the socially acceptable answer is the wonderful people but I really love Brazilian salgadinhos.  It’s an entire category of food that does not exist in the States.  A salgadinho could be one of many different kinds of baked, cheesy, bready snack foods.  There’s the coxinha, empada, kibe, folhada, pastel…Pick one and pair it with a fresh squeezed juice from a fruit you’ve never heard of.  Delicious!  And you can eat this relaxing outside 365 days a year!

5. What’s the worst thing about being an expat in Brazil?
Excluding the language barrier, the worst thing in Brazil is being a woman in a very masculine dominated, looks obsessed culture.  I thought the United States was bad when it came to presenting girls with unrealistic body expectations.  Brazil is so much worse.  Now that I’m raising a daughter, I realize just how bad it is.  All girls are called princessa and told not to cry because it’s ugly. (Não chora! Vai ficar feia!) I could not find baby girls clothes in any other color than pink.  Toddlers go with their moms to the salons and get mani-pedis.  On billboards, in magazines, everywhere are advertisements for plastic surgery that you can pay for in 20 installments!  Brazil has more plastic surgeries per capita than any country in the world. It will be an uphill battle to raise a girl who does not think makeup is necessary for the gym.

6. What do you miss most?
I miss the ease of speaking my native language. I’m not good at learning languages and being good with word is big part of my identity.  Even after eight years, I’m not myself in Portuguese.  None of my Brazilian friends know the real me.  They no a translated and edited version of me.

7. What did you do to meet people and integrate in your new home?
Having a child did more to integrate me than anything else I’d done in Brazil.  Also, finding a job a liked and feeling successful professionally.  Proving that I could support myself in Brazil is necessary, gave me the confidence to quit my job and be supported.  (At least until I publish my first novel.)

9. What is a myth about your adopted country?
That all Brazilians love meat and soccer.  I married a vegetarian who has no team affiliation. And that Brazilians speak Spanish.  I’ve had to tell more than a few people that my husband speaks Portuguese.

10. Is the cost of living higher or lower than the last country you lived in and how has that made a difference in your life?
The costs of industrialized, imported, or luxury goods are generally a lot higher in Brazil than in the US.  I still do all of my clothes and tech shopping in the US.  Brazil has some of the most inflated prices in the world.  The BigMac index has a chart that compares price versus per capita GDP and there’s one red dot that shows a crazy expensive Big Mac in comparison to low-income population.  That dot is Brazil.  On the other hand, labor is incredibly cheap and even middle-income families can afford a full-time maid and, if necessary, nanny too.  My husband and I are the only family I our circle of friends without a nanny.

11. What advice would you give other expats?
Learn Portuguese.  If you’re coming to Brazil, you have to learn some Portuguese before arriving.  Even in Rio, there aren’t a lot of English resources compared to other big cities.  Also, be patient.  Brazil is very bureaucratic and things get done when you “know a guy.” 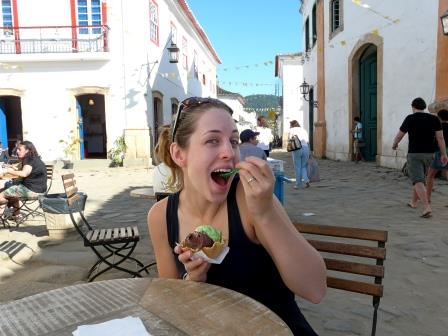 I started my blog at the end of 2009, posted regularly, and built it to the point it was showing up on some “Best Blogs in Latin America” lists.  I was looking for a creative outlet and was trying out creative nonfiction writing.  Then I got my teaching job, had a baby, and gave up sleep.  Suddenly, there was no time or energy for a blog and I let it sit untouched four years.

Now, I’m recommitted to writing as a career and I’m back to posting once a week.  I’ve missed it and I’m sure the world has missed my opinions on important matters like kids’ birthday parties and kitchen appliances in Brazil.

To find out more about living in Brazil, refer to our