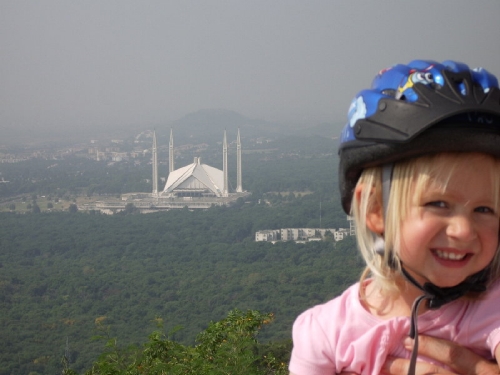 We can all share tips and advice on the best way to prepare your children for relocation, but the bottom line is - all kids are different, so what works for one might not work at all for another. Some children think of moving around as a fun adventure, while others find it hard to adapt and might require more help from the parents during the adjustment period.

I would not be able to speak from experience on this one. My younger daughter is just two and when she first moved at 1.5 she didn't have any questions to ask. I guess, I will be able to see if my girls are any different in terms of attitude towards relocation at a later time, when we move again. For now, I decided to talk to a mother, who had much more experience already, being an expat child herself and having relocated with her two older kids (planning to relocate once again). Here's an interview Clara Wiggins, author of The Expat Partner's Survival Guide, about her expat children.

Please, tell us about your kids – where were they born? How many countries did they live in?

I have two daughters, E who is now nine and M, who is seven. They were both born in our home town in the west of England, but E was what we call “made in Jamaica”. I actually took her (unknowingly) with me to Thailand as well – that is where I found out I was pregnant – plus we had my scans in Miami, so she had been to a number of different countries before she was even born.

Since they were born, we have lived in Pakistan and St Lucia as well as the UK, and we are currently preparing to move to South Africa.

What was their reaction to relocation? Were they excited or apprehensive?

Certainly the first time we relocated, they were both a little too young to take it in – E was not quite three and M was seven months when we moved to Islamabad. Nevertheless, we did what we could to prepare E. My husband visited in advance, and was able to make a little video which we showed her. This included things like the play park and swimming pool on the compound, things she could relate to.

When we moved to St Lucia, she was coming up to four so took a lot more of it in (M was still very young – not yet two). We also took them both on a look-see visit beforehand, so they really knew what to expect. I think because of this, as well as the fact that they were still too young to form strong bonds with friends, they were pretty excited about the move. After all, we were going somewhere with a swimming pool in our garden!

This time it’s very different as they are both old enough to understand what they are losing – M in particular has no memories of St Lucia so really she is leaving behind the only home she has ever known. That is something we need to remind ourselves, as both my husband and I have moved around a lot so another overseas move isn’t that big a deal to us. The children also have very strong friendships at their local school, so I think there is going to be some real sadness. However, again we took them out to visit Pretoria so they know what to expect – and I think there is a lot of excitement as well as apprehension.

Did they encounter any problems while settling in a new place? How did you manage to help them out?

Again, M was really too little to even understand she was somewhere new – especially when we moved to Pakistan. As long as we were there, nothing else really mattered to her. But E did go through some transition issues – mostly because not only had we moved to a new and unknown place, but because she had to go to pre-school. And both times, the schools were very foreign to her – the pre-school in Pakistan was a British school, but all her teachers were locals and many of the other children were from a totally different culture to her. In St Lucia, all her teachers were St Lucian and she was the only white, blond-haired girl in her class. However, in both circumstances the teachers were fantastic, and very used to dealing with children from all sorts of different countries, cultures and backgrounds – so it didn’t take her long to settle in to either. Although the school in St Lucia continued to spring a few surprises on us from time to time – I wrote a post here about some of the strange rituals we had to try and get used to….

The hardest time E had was when we were evacuated out of Islamabad after we had only been there for a few months. We couldn’t move back into our house because it was rented out, so had to find temporary accommodation. It was an extremely unsettling period and E’s behaviour reflected this – I think it was the only time in her life she has ever really been naughty! The only way we were able to help her was get things back to normal as quickly as possible, which we did once we moved back into our old house and she went to the local pre-school again.

Being an expat child yourself, does it make it easier for you to understand what your kids might be going through?

Good question. All I remember from this age (we moved to the Philippines when I was 4, returned when I was 8 and then went to Nigeria when I was 11) was accepting my fate. I think we always knew we would be moving on – so it never came as a great surprise to me when it happened. We were just excited to know where we would be going. As I got older though, I was far more aware of how different my life was to my contemporaries, and what I was missing out on. As a young adult, my friends would talk about returning to their home towns at Christmas and meeting up with all their friends in the pub – I was never able to do that as my friends were all over the world. I didn’t want that for my children so we have decided to take this posting while they are still young and then settle back in our town in the UK where their friends are. However, I know from past experience that things change so I never say never about anything anymore!

Are you talking about kids issues in your book?

Absolutely! I have four chapters dedicated to children – the first is a general chapter which talks through how children might deal with the move at different ages; then I have a chapter entirely from the children’s view. This is one of my favourite chapter’s in the book – it’s such an eye opener, as well as at times quite sad, hearing directly from them. Then I have a chapter from the point of view of adult third culture kid’s – which includes myself. Finally I cover schooling. As this is such a large chapter I thought it needed a chapter all to itself – and I look at boarding school, tutoring and home schooling as well as the more traditional methods.

What would your advice be to expat parents? Any tips?

To read all my advice, you'll have to read the book ;) However, I think it is important to treat every child differently, even - or especially - siblings. Every child reacts to a move in their own way, and while some will talk to you about how they are feeling, others will bury those feelings deep so that on the surface they may seem to be coping well. Of course, some will cope, some will breeze through – which must be even more difficult for those siblings who aren't happy. So listen to your children, treat them all as individuals and don't always assume all is well just because they appear to be coping on the surface.

You can read more about Clara's expat experiences on her blog.

If you're interested to find out more about relocating to South Africa, please, have a look at this Easy Expat's guide.

Yuliya, author of Expat Kids blog on Easy Expat, is also the author of TinyExpats.com, writing about expat life and travels of their nomadic family, sharing their journey with two tiny expats.

Author: TinyExpats
I’m a mother of two little girls, who are slowly but surely becoming tiny expats. We moved around a lot in the last 10 years or so. I met my husband in London, where we studied together. I moved to UK, when I was 17, from Ukraine and he came there to study, when he was just 12, from Moscow. After I lived in UK for 7 years we moved to Hambrug, where our oldest daughter was born and where we lived for about 4 years. When she was 1 year and 5 months old, we relocated to Shanghai and spent a year there. Our next destination was Moscow, a city where we spent two years and had another baby girl. The next time we moved, our second daughter was about 1 year and 3 months. This was in May 2014, when we arrived to a tiny but a very beautiful and cosy town of Pardubice, Czech Republic.
Tools:
Bookmark
Print
Send
Tools: