Hello world, my name is Andrew.  In April of 2014, I  moved to Germany with my wife, Julie,  and our two dogs (Bella and Duffy).   Our lives were forever changed in November of 2013 -  when I proposed to Julie at Magic Kingdom in Orlando, Florida.  The week after our engagement she was offered a position to move abroad to Germany. We planned our wedding in thirty-two days and were wed in Baltimore, Maryland.  Some logistical errors delayed our move, but we took advantage of the situation and vacationed in Costa Rica for a week before we found our new home in Homburg, Germany.

1. Why did you move abroad?
My wife was offered a contracting position in Germany. Of course, our only caveat was to ensure our dogs could expatriate with us - flying in the cabin, not in doggy cargo.  When Julie first told me about the job, my immediate response was, “absolutely, let’s move.”  Why…?   I firmly believe that if an opportunity to relocate abroad presents itself, take advantage of it - become immersed in another culture, challenge yourself, travel, and embrace new experiences.

2. How do you make a living?
Given my current visa status, my career choices are significantly limited, but I am currently pursuing a Red Cross opportunity (hopefully the dogs will be approved as well).  I could apply for  jobs on local military bases, but I would have to go through a multi-tiered interview process to become a server at Chili’s.  Then,  I would be last in consideration being the dependent of a contractor. Therefore, I am officially unemployed, however; when I am not writing or editing photographs, I enjoy contributing to crowdsourcing platforms. I do my best to translate articles on Duolingo and continue to learn German (and French).  Also,  I geotag my photos for use on Google Earth and Google Maps. Additionally, I am trying to teach myself to use Leaflet (an open-source map application) to build maps recreating our city-in-a-day tours (free for public use of course).

3. How often do you communicate with home and how?
We periodically communicate with friends and family back in the States with varying frequency in a given week.  Fortunately, technology has created several means to facilitate correspondence across countries with the basic requirement of the Internet. We use three main applications: email, Viber, and Skype.

4. What's your favorite thing about being an expat in Germany?
There are countless things that could be listed here, but if I had to select one, it would most certainly be the ease of travel throughout Europe.  It should come as no surprise to anyone who as ever looked at a map of Europe - Germany is conveniently located within the continent. The public transportation within Germany is fantastic; there are two bus stops in my small village and a train station in downtown Homburg.  France and Luxembourg are within an hour’s drive; Belgium can be reached in two; Netherlands in three; Switzerland in four; Austria and Czech Republic in five.  Not to mention, but really mention; our budget airline hub is also very close.

5. What’s the worst thing about being an expat in Germany?
The Internet. I speak only from personal experience, and sadly, Kabel Deutschland doesn’t have the infrastructure to bring broadband to my area. Therefore, this limits the Internet options to satellite based providers, and they are equally bad.  There are two companies, but they use the same exact technology - so pick your poison.  Also, now that it is the middle of winter, the German permacloud makes us yearn for sunshine.

6. What do you miss most?
Surely our friends and families would be listed in this area (which is true), but communication is easily accessible. To me, to miss something refers to an intangible - and in this case, that would be the variety of food. The first time Julie and I drove to France (Metz), we didn't enjoy a baguette, croissant, or coffee.  Instead, we had sushi, a poor decision in hindsight, but it seemed like a good idea at the time because we had eaten nothing but pasta and schnitzel for a month. To clarify, there is no shortage of delicious German and Italian restaurants, however; our palates remain nostalgic of international cuisines.

7. What did you do to meet people and integrate in your new home?
Friends have been a little harder to come by, although, we have made connections with other expats and Julie’s coworkers.  We try to travel two to three weekends a month, therefore: we must curtail our social interactions to friends that can fit inside our car.  Sometimes, we contemplate placing a weekly ad for friends in the local  newspaper, Die Woch.

8. What custom/ habits do you find most strange about your adopted culture?
During the warmer months, there is always a festival somewhere in Germany, the only thing that changes are location and beer.  When we first moved, Julie and I attended these celebrations every weekend - soon realizing they were all identical. The Germans are a social,  lively bunch who love these soirees,  and we have grown to love them as well. Unrelated non-sequitur, there is ubiquitous road construction throughout Germany - talk about job security.  Honorable mention, the amount of waste/recyclable containers we have - plus, disposing of glass is a completely different system (but it works wonderfully).

9. What is a myth about your adopted country?
The beer is stronger here.  Of course this is a subjective opinion, but most brews average an alcohol content of 5-6% - stronger if compared to Miller, Budweiser, and Coors, but those aren’t real beers.  The real difference, most beverages are served in half-liters or a maß, which is one liter.  Another myth, there are no speed limits on the autobahn (only true in certain areas on the highway).

10. Is the cost of living higher or lower than the last country you lived in and how has that made a difference in your life?
Our living expenses are about the same as they were back in Maryland, so not much has changed.  However, electricity is a far more expensive here which makes the winters difficult and possibly very expensive.  Fortunately, my wonderful neighbor help me order two cubic-meters of fire wood that should last for quite some time.

11. What advice would you give other expats?
In the simplest of terms, do the research and pool the sources.  For starters, read blogs of those who have moved abroad - don’t feel shy,  contact them with questions (some may answer while others may not).  Reach out to others that have moved to the area, for example; future coworkers, inquire about their experiences.  Also, try to get an idea of where you would like to live ahead of time  - determine a commute radius to start to narrow down the options (hone the wish-list in realistic terms given the country/area).  After moving, first and foremost - explore.  Become aware of your surroundings, try to meet people, and do the best to learn the basics of the language. Be Patient!!!  Moving abroad is not easy by any means, expect some difficulties, but approach everything with an open mind - it will be less frustrating. 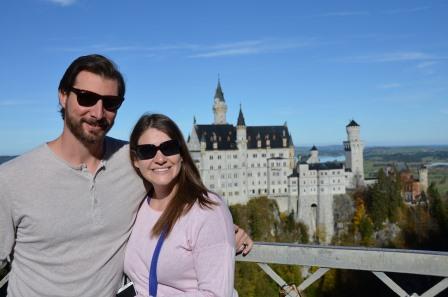 I started my blog in “April 2014,” but the first publication didn’t hit the interwebs until mid-June.  I retroactively dated each post  to keep an accurate timeline of our travels.  Hausetiere und Menschen was originally a means to share our life with friends and families.  Relocating abroad started  a new chapter of life and I felt compelled to write about it, hopefully;  in a manner that is fun and entertaining.  Before moving, I read countless blogs to garner an idea of what it would be like to live in another country.  Having read the experiences of people I don’t know or haven’t met - helped make the decision to take the chance and move to a place where my wife and I knew no one a little easier.  With blind optimism, maybe someone will come across my blog will somehow become inspired to do the same.