Where to Watch the 2014 World Cup in Berlin 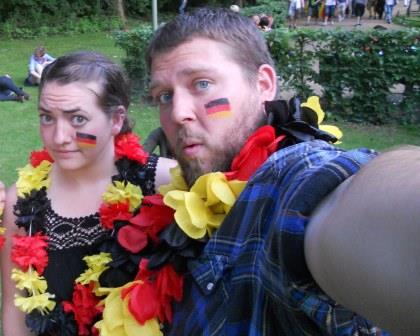 A true turncoat to America and American football, I'll be rooting for the home team in the 2014 World Cup. In my case - that means the Nationalmannschaft (German team)!

I don't know how you could miss the lead-up, but for the uninitiated the 2014 World Cup starts today (June 12th, 2014). The opening game will be held in São Paulo at 17:00 (local time) which means 22:00 German time. Games will hop-scotch around Brazil until the finale on Sunday, July 13th. That means I am likely to find myself watching football (or fussball here in Germany) for the next month whether I like it or not.

Luckily - I like! Luckily because there is no escape. All games will be broadcast in Germany on  ARD and ZDF and my husband has already helpfully pinned a Bild schedule of events (which came unsolicited in the mail) to our wall so we don't miss a game. When we do venture out, practically every bar, restaurant and imbiss will be playing the games.

Where I'll be Watching the World Cup in Berlin

While this is my first World Cup (Fussball-Weltmeisterschaft), I've had a chance to catch the competition mania at previous European Championships (Europameister) and Olympics. Besides catching games non-stop in our flat, we'll be hitting some of our favorite spots around town for the games.

Most bars are going to be blaring fussball whenever games are in play. While dedicated sports bars may offer the best viewing, this is a great excuse to visit your favorite watering holes.

To get into the Brazilian vibe, visit Berlin's beach bars complete with imported sand. Note that some of the more popular gardens require you to purchase a ticket.

If you are rooting for someone other than Germany, you may have an easier time finding some like-minded folks at an expat bar. There are plenty of foreign bars and restuarants in Berlin to support your favored team. Hostels are another option for finding an international crowd.

Take the party outdoors in a traditional German biergarten. Well-accustomed to catering to televised sporting events, arrive early to find a good place in front of the screen.

Public viewings are the best way to join the collective sporty freak-out. Like Eurovision, screens are put up around the city -often with standing room only.

The Fan Mile in Berlin (Fanmeile) in Berlin is one of the largest in Germany. Located on iconic Straße des 17. Juni, a massive 60 square meter screen is placed at Brandenburger Tor (Gate) with six more screens throughout the Fanmeile.

Note that the street and sections of the Tiergarten are fenced so entry is only through secured points. This means no glass bottles, food, weapons etc. With capacity in the hundreds of thousands, even this popular site can fill up on German game days.

For more places to go and things to do, check out our comprehensive Guide to Berlin and entertainment in Berlin listing.

Where are you watching the World Cup (or not)? What team are you rooting for?

The German team has pulled through and is the 2014 World Cup Champion!

More articles
How a Covid-19 vaccine will impact us
As the vaccine race continues, we see more players emerging in the Covid-19 eradication marathon. An increasing number ...
Healthy habits that we got during the pandemic and we should keep
While trying to adapt to the new normal imposed by the Covid pandemic, people came up with different ways of coping with ...
What can expats expect in 2021?
The year 2020 has been a challenging one to say the least. Consequences of all the lockdowns and job losses will have ...
Happy New Year 2021!
All the team (editors, moderators, networkers) wish you a much better year 2021 than the past one and we look forward to ...