From Germany to China: Selly's World 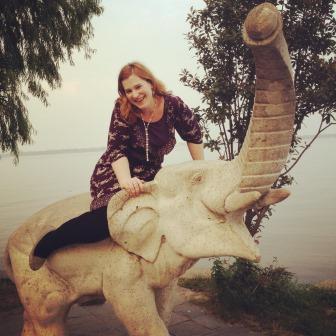 My name is Sarah but apart from my students everyone calls me Selly. You can also call me 韩香萍 (Han Xiangping), that's my Chinese name. I'm originally from Germany but can currently be found in Wuhan, China.

1. Why did you move abroad?
Many reasons, some of them rather complicated. I moved for love, the delicious food, the language, the scenery, the chance to follow my dream and do something I truly enjoy doing, which is teaching English.

2. How do you make a living?
I'm an English teacher, which is mostly fun, sometimes a little exhausting and tiring. My students are a lovely, witty, funny, clever, strange bunch. I teach adults, university students and occasionally a middle school / high school student ends up in the mix. What with the variety in background, jobs, experiences and dreams, teaching doesn't often get boring. My students are inquisitive and usually up for just about everything. Some can be a little shy and getting them out of their shells can be a little bit of a challenge, but it's fun all the same. Other students are very outgoing and don't shy away from speaking their mind and are downright cheeky.

3. How often do you communicate with home and how?
My dad usually calls me. He has a second mobile phone number, which my friend helped him to set up, just so he can call me here in China. It's very cheap for him to call while it's very expensive for me to return the favour, although I will sometimes call his phone via Skype. Then there's Facebook, the occasional video chat and of course What's App and e-mails. It keeps me connected and I can easily share photos and news with my family and close friends. That way I'm part of their lives and they remain a part of my life, no matter how many miles there are between us.

4. What's your favourite thing about being an expat in China?
Actually, I don't think of myself as an expat, I just happen to live here in China. So I'm the foreign girl but that's about it. I don't usually hang out with other expats, I don't go to bars or out drinking. Apart from my colleagues, the other foreign teachers at my school, I don't know any other expats in Wuhan. I haven't made an effort to make friends with other expats, so let's rephrase the question: What's your favourite thing about living in China? My favourite thing about living in China is being able to use my Chinese skills to independently get around, being able to eat all kinds of delicious Chinese food whenever the mood strikes me to, having a job that I love, being able to spend time with friends, learn more about the culture and the Chinese way of life all while improving my Chinese language skills.

5. What’s the worst thing about being an expat in China?
I'll be blunt, I can't stand expats moaning about how 'backwards' China is, it makes me angry. China is simply different, very different. The way of thinking just isn't the same and some people just don't seem to get that. Most expats here in China are amazing people who have chosen to move to another country for various reasons. They work hard, are talented, interesting, funny and pretty cool to know or hang out with, but somehow those who moan and complain about anything and everything just happen to stand out. For them everything seems to be 'crap' and it makes me want to throw things at them. I prefer the Chinese way of life compared to the expat way of life, which might just be the reason why I'm hesitant to make friends with other expats here in Wuhan. Life in China is different and I don't profess to be an expert at it, there are many things that I don't get but I try to understand it all the same.

6. What do you miss most?
My dad & German bread, although I can live without the latter for I'm in the land of dumplings.

7. What did you do to meet people and integrate in your new home?
Meeting people is easy, my Chinese colleagues are a lovely bunch and so are my students. My students are always eager to spend time with me and I've made some great friends that way. Apart from that, well when you speak Chinese meeting new people is easy. I love chatting away to people, it doesn't really matter who they are. Once they figure out that I can speak Chinese they are more than happy to strike up a conversation with me and sometimes I have to fight to get away, not that I want to but sometimes I have things to do and other people to see. Meeting new people is a lot of fun and I've been fortunate enough to meet some very interesting people who introduced their friends to me.

8. What custom / habits do you find most strange about your adopted culture?
There are many things I find strange but it's not an annoying kind of strange, just an amusing kind of strange. I do find it difficult to single out a particular custom or habit because I try to adopt Chinese customs and habits to the best of my abilities. I prefer to blend in rather than stand out and since most of my friends are Chinese this works in my favour. I have my moments when I don't really understand the world around me and whenever that happens I hide a little, I withdraw and play a silly game on my phone or read something on my Facebook or simply block out the world with my favourite music. If there's something that I really don't understand, for example why a person acts a certain way or say something in a particular way, I find a close friend and ask them to explain to help me understand.

9. What is a myth about your adopted country?
Haha, as it happens I just asked my students that question the other day. "Chinese people eat rice all the time" is what my students responded. I guess that's the biggest myth and I can't believe that there are still people out there who believe that kind of nonsense. Chinese cuisine is the most varied cuisine there is and it's d.e.l.i.c.i.o.u.s. - I can't even begin to list all the amazing things there. Just thinking about it all makes me hungry, very hungry.

10. Is the cost of living higher or lower than the last country you lived in and how has that made a difference in your life?
The cost of living here in Wuhan is much lower than in Ireland, where I lived for eight years before taking the plunge and finally moving to China. Back in Ireland going to the hairdresser cost me an arm and a leg, here in Wuhan I go every other day to get my hair washed and styled...because it's more fun when somebody else does it + my hairdresser is very handsome, funny and cute. Fruits are quite expensive here but vegetables and fresh meat and fish is very cheap, so is getting your nails done professionally. Okay, that's not very cheap but compared to Germany and Ireland it's definitely affordable. My bills are quite cheap but every time I treat myself to a cup of coffee from Starbucks or Costa I want to cry. It's so expensive, it's more expensive than in Western countries. What with other things being cheaper I do manage to treat myself more often than I did in let's say Ireland. Also, I don't usually eat Western food, which is more expensive than local cuisine, since I'm not a big fan of it. The only Western food I like is the food my dad and my sister cook. All in all, I manage to save more money here than I would back home and that's fun.

11. What advice would you give other expats?
Try to learn as much as possible about the culture, meet locals and make local friends, learn the language, try things you never tried before and most importantly forget everything you know. If you come here and expect it to be just like back home, you're going to be severely disappointed. Life is different here and if you lower your expectations then you'll have a whole lot of fun. Think of it as a chance to start again, from scratch, but do it with an open mind. 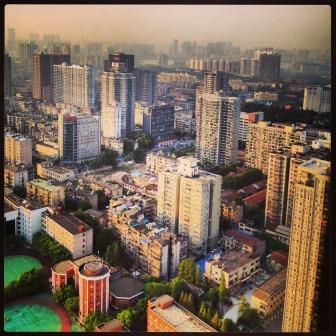 I started my blog back in 2011. It was something I always wanted to do but I was always hesitant about it not because I had no idea what to write about but because I'm not especially technically talented. When I think of HTML I just want to cry. I'd rather have surgery and spend a week getting IVs every single day. It took me forever to find a blog host for a dummy like me but when I did I put 150% into familiarising myself with it and getting used to all the functions. I do love a good challenge as long as it doesn't involve a weird looking mess of characters e.g. HTML. I love writing, I've been writing short stories and fictions for as long as I can remember, and knowing that there are people out there who want to read what I have to say makes me happy. Thank you!