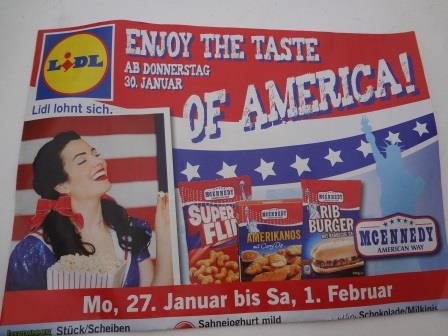 Uh-oh. I saw the advertisement as soon as I entered the Berlin grocery store. Red, white & blue. A woman dressed like Dorothy from the Wizard of Oz? Promises of Super Flips, Amerikanos and Rib Burgers....it must be

A weird conglomeration of what Germans think Americans eat, this is a bizarre collection of cross-cultural food.

MCENNEDY is a private brand well-known to Americans in Germany and much of Europe. Their vaguely wrong American-esque name and products give you hope of finding those US goodies you miss before destroying all moderate expectations. Instead of the BBQ sauce, popcorn and Mexican food you crave, they sell things that are just weird. Mallow Cakes? Carmel popcorn yogurt? Again I say - Super Flips? Serves us right for trusting anything with a Statue of Liberty brandished on every package.

Here is my verdict on "edible or not" from a selection of goods at my Lidl's America Week: 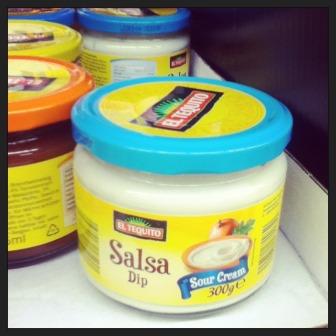 This was the first offender I noticed. Unrefrigerated, categorized as salsa dip with small green chunks swimming at the bottom....this is all wrong.

If I am being generous (which I'm not), I would give El Tequito the benefit of the doubt and say this is probably a Ranch dressing. While it still has no place paired with Mexican food or being called salsa, this makes it slightly less disgusting. Nonetheless, my verdict is: 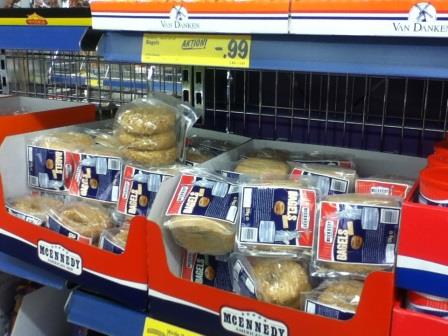 From my exclamation point, you may guess that I am excited about this one. Bagels have made their way to Berlin in specialty shops, but are still largely unavailable in grocery store. This was a big win from McEnnedy for me. I almost feel bad about all the bad things I have said/will be saying about it. Verdict:

Erdnuss Creme roughly transaltes to peanut cream, or peanut butter for us Americans. As a hardcore addict, regular shipments from the States keep me in supplied with real PB and I have even learned to make a rudimentary homemade recipe. Finding this German version of my American should be a relief, but I am suspicious.

Early in my expat career I bought some version of Ernuss Creme and found it unacceptable. It just didn't taste like my childhood favorite and I sadly gave up on German peanut butter from that point on. Maybe it is time to try again, has anyone tried it? However, the verdict today was: 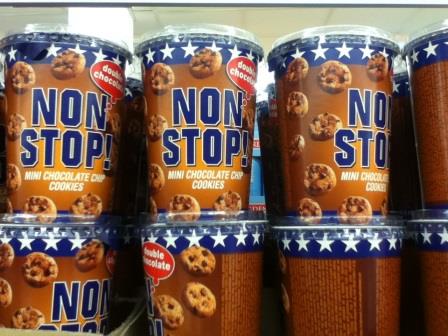 These cookies and their name seem to be more of literal comment on what Germans think of American eating habits. AMERICANS CANNOT STOP EATING. GIVE ME THE COOKIES! NOM NOM NOM!  Needless to say, my verdict:

Bought for my German friends to make them feel superior 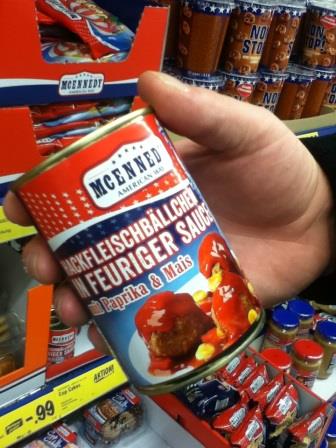 This mouthful of a name would be a mouthful of disgusting food. I take it all back McEnnedy! Everything nice I ever said was undeserved looking at this can of meatballs with a "fiery sauce" filled with paprika and corn. Is this supposed to be Mexican? It certainly isn't American. And knowing German sauces I am sure this lacks any real fire and is all sweet. This is the thing of foodie nightmares. My verdict (as if you couldn't guess):

RUN! And never come back until America Week has gone far, far away.

What atrocities have you seen during American week? Know of other great examples of cross-cultural food gone wrong? If you would like to share, send us a picture or story by e-mail, comment or on twitter. And to see what I actually eat in Berlin, take a peak in my fridge.