From South Africa to Spain: Cheap in Madrid

Sarah, I'm South African and have been living in Madrid for more than  years now.

1. Why did you move abroad?
I moved to Madrid because of work. I had just graduated from university when a German company with offices in Madrid recruited me.

2. How do you make a living?
I have since started my own guide and tours company. We organize customized tours and experiences for tourist and business travelers to Spain.

3. How often do you communicate with home and how?
I usually go home once a year and thanks to technology I'm constantly calling, emailing or even on whatsapp with my siblings.

4. What's your favorite thing about being an expat in Madrid ?
Wow, where do I start…Madrid is a city with a small town feel to it. Therefore you still get about everything here (well, not everything because we don’t have South African restaurants, for instance).

The people are warm and as years go by the city is getting more and more cosmopolitan. The city is ideal for students on a gap year and even to young couples or those who simply relocate for work. Apart from that the climate is great, though summers can be torching hot, and the cost of living is affordable, hence CheapInMadridBlog ;) .

5. What’s the worst thing about being an expat in Madrid?
I have always felt at home in Madrid, like a second home from home…however, I have to admit that one has to be prepared for the first few months since it can be a struggle to communicate in English and services aren’t great…for instance, any newcomers to Madrid should expect to wait noticeably long to get telephone lines or internet connection to their apartments. Also, in general most shops are closed from 2pm till about 5pm.

6. What do you miss most?
I miss my family, my friends of course and I have generally accepted to live without typical South African food. Its not all gloomy though, we have a South African community in Madrid in their hundreds so we have get-togethers now and again, where we prepare South African dishes and also celebrate National holidays at the South African embassy.

8. What custom/ habits do you find most strange about your adopted culture?
After 8 years, fortunately or unfortunately, I have assimilated these strange habits… or manerisms. The habits I have assimilated are for instance, having lunch and dinner later than we normally do in South Africa. I also don’t ask questions in English in the interrogative format anymore, I simply, put a no at the end of the sentence…like, ”You are ready, no?"

The habits I haven’t adopted include not throwing serviettes on the bar floor. The other strange observation is the length of time it takes to say goodbye and leave a party; it usually takes half an hour more between the 2 Spanish kisses and parting words between the party leavers and ones who are staying. Lastly, football occupies too much tv time and good television programmes only appear very late at night.

9. What is a myth about your adopted country?
Before I moved to Spain, for me, Spain was the bulls of the San Fermín and the massive tomato fights of La Tomatina. However, I have come to realise that though these festivities are still popular with Spaniards, there are increasingly more tourist atrractions than anything else. The same applies to bullfighting...not all Spaniards are pro bullfighting. It is a heated and controversial topic and there are two sides to this issue.

The other myths in Spain have to do with the working culture: Spain is not all and only about drinking sangria, taking afternoon siestas and going out. While I was working for a private company, there were no siestas...and in general shopkeepers and restauranteers are closing for the afternoon siestas less and less as this disrupts business and tourists don't get the afternoon siesta mentality that keeps them from shopping while shops are closed in that time.

Let me summarise with this article about how to determine if one has been fully intergrated into the Spanish or Madrid society or not : http://www.cheapinmadrid.com/15-signs-youve-become-madrilena/.

10. Is the cost of living higher or lower than the last country you lived in and how has that made a difference in your life?
The cost of living in Spain is somewhat difficult to compare to South Africa. Firstly, the currencies are very different, weighing favourably towards the Euro in Spain vesus the Rand in South Africa.

However, apart from that, salaries are much lower in Spain for certain professionals like engineers, accountants, IT etc. To give an example, in South Africa, for these highly sought professionals, companies make attractive offers made up of packages which go towards their vehicles, car mortgages, health insurance, pensions and then salary. The property value is lower in South Africa for the quality and size of the property. However, in Spain, meanwhile the public sanitary system is maintained, this is an advantage to the pocket because in South Africa, reliable and convenient health services are private. Now back to Spain, as a result of the crisis, there has been an intense price competition for commodities, so food and entertainment is relatively affordable and people now tend to rent than buy properties. Students tend to share and working people are taking advantage of the property bubble burst to rent lower while the brave are buying, as property prices plummet.

11. What advice would you give other expats?
I would give the advice that most expat bloggers interviewed here give in their interviews. Come with an open mind…on particular to Spain, if you really want to enjoy Spain, make an effort to learn Spanish and mix with Spaniards to have a wholesome and authentic experience of the society and culture.

Then for the logistics of the country check websites like Easyexpat or even contact your embassy in Spain to get you in contact with expats from your country to get a feel of what to expect.

Lastly, and most importantly, be clear about the paperwork you will require for residing in Spain. The bureaucracy is NOT a myth here and can be a nightmare so make sure you have all your paperwork ready and validated. 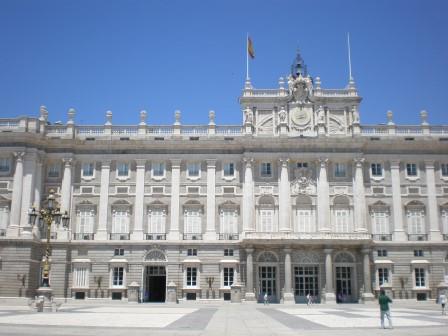 I started my blog in 2010. The blog was a result of friends asking me to do so, because I was always the weekend itinerary planner of all things cheap and free to do in Madrid. By writing the blog I got to share with many more people, the resources that the city has which are accessible to everyone. Now we have become a reference blog for many English language assistant teachers in Madrid as well as Erasmus students and au pairs. We also collaborate with expat groups and clubs by publishing their events.