From Dallas to Brussels: MontgomeryFest 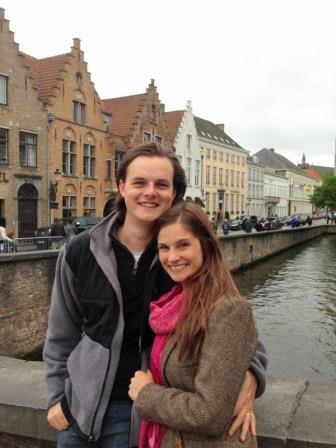 We are the Montgomery’s. I’m Annie and the saner half is Justin. We hopped from Dallas to Brussels in 2012, four months after we got married. Originally, I’m from South Louisiana and him from the Pacific Northwest, which explains any contrast reactions to life here in Belgium. Because it’s cold.

1. Why did you move abroad?
On our fourth date, we decided on it.  We got into the tough questions and realized that we both had a passion for seeing the world, so we made it our mission. We always had it as an eventual plan, but after we got engaged the next year, we started plotting. Justin’s work offered a tour, so, obviously. The plan was to just get out and there was an opening in Brussels. Done!

2. How do you make a living?
Justin has an exciting career in public accounting. I semi joke, but that’s how we met and it facilitated us having a tour abroad, so I can’t knock it.

I found it harder finding a job – in Dallas, eeeeveryone wanted an accountant. In Brussels, I needed French or Dutch and my French is more of the ‘how are you’ and ‘I’ll take the tartar with flat water, please’ variety. I was so bored going from career-driven to housewife in a week. So, luckily after a few months, I found a part-time freelance position where I can put my accounting and blog skills to good use. We don’t remember which CV (resume) bulletin it was on because we put that sucker everywhere. And the part-time helps because as soon as Justin has holiday time, we’re off traveling!

3. How often do you communicate with home and how?
With parents, we have a check-in call about once a week. My mom always asks which countries we’ve been to lately. With friends, I feel like we’re constantly chatting on some social media platform. It’s never the same timezone, so we send random pictures of what life looks like right now. It usually involves some sort of ‘you should be here’ to coax them over to Europe. Sometimes it works.

4. What's your favorite thing about being an expat in Brussels?
The expat community. The city is so transient that we often liken it to a freshman at university experience – people are constantly new and eager to meet new people. Every expat has a different story and we want to hear them all. We often find ourselves around dinner tables filled with any combination of Italians, Chinese, Croatians, Americans, etc. That’s our favorite.

5. What’s the worst thing about being an expat in Brussels?
How often we have to say goodbye.  Most of the timelines in this city are short-lived – 3 to 6 month internships with the Parliament or 2 to 3 year contracts with private sector companies (that’s us). We make a lot of fantastic friends from around the world, but they are only here for the summer. I’d definitely have to say the goodbyes are the hardest part.

6. What do you miss most?
The food. Sorry Mom. We can persuade people to come visit us and always see them on social media, but no one can hop a flight and have freshly made Tex Mex delivered before it’s cold.

7. What did you do to meet people and integrate in your new home?
We keep a ‘why not?’ kind of lifestyle. Someone from church is having a BBQ? Why not. Meet someone at the BBQ who is having a housewarming party (There are always housewarming parties in Brussels. People move around like crazy here.)? Count us in. We often get asked how we meet friends in this city and it’s always a flow of – we met him through her and she had a friend who we clicked with and invited us to a thing where we met this couple and we’re having a dinner at our place this Friday so they can all meet each other. It’s fun.

8. What custom/ habits do you find most strange about your adopted culture?
Ooo. Good one. Did we mention we live in Belgium? This is THE quirkiest little country there ever was. I could say the patches that they put on everything instead of fixing anything or the priority to the right driving rule (I’m always the passenger on the right side…scares me to death) or how hard it is to actually meet a Belgian or the fact that everything is a competition – the best friterie (They take this very seriously.) or the Brussels vs. Leige Belgian waffle or don’t even get me started on the Flemish’s whole-hearted resistance to their Southern French neighbor. I can’t choose one.

9. What is a myth about your adopted country?
Belgium is in no way, at all, not even close BORING. Nope.

10. Is the cost of living higher or lower than the last country you lived in and how has that made a difference in your life?
Hmmm..it depends. Overall, it’s higher. Europe in general doesn’t have convenient shopping centers, so we spend more on foods. But then again, we shouldn’t be eating bulk, low cost foods (take that Wal-Mart) anyway, so maybe it’s lower in the end since we’re eating healthier. Although, the healthcare system soars over here, so we’re saving dough there. But don’t forget that wine, cheese and beer are muuuuch cheaper in these parts, so maybe we aren’t eating healthier after all. But, I mean, yum. And then there’s the travel. We’re constantly booking trips to see new places, which is cheaper travel (Thanks for being so central, Belgium!), but its constant travel, so there goes the disposable income! It’s been a year and we don’t have a clear answer here.

11. What advice would you give other expats?
Oooooo! Let’s see…expect it to be hard. The areas that I thought we’d be fine on were just the ones that blind-sided us. If I was expecting something to be hard, it allowed me more time and patience to get used to it. That’s another one – give yourself time. Don’t push yourself too far. There’s enough going on that you shouldn’t put that pressure on yourself…it might not make sense before takeoff, but it will in your first month. Your world will be different and the best way to adapt to it is to be open to it and explore it. 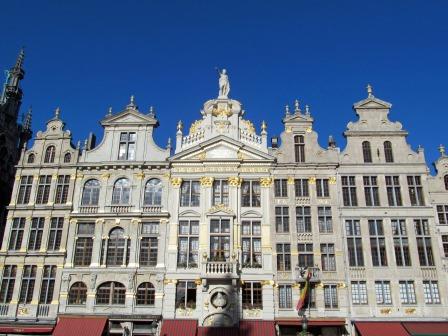 12. When and why did you start your blog?
Leading up to our move in 2012, there were so many questions from our family and friends about the status and the when’s and where’s that we’d end up repeating the same story time after time. We wanted to keep everyone in the loop, but couldn’t keep things straight between packing and applying and whom we updated on what (did we mention we were also planning a wedding?!), so we wanted a place our loved ones could go to for updates on us. Then, once we started setting it up, we were connected with other bloggers and expats who were having similar issues and stories of things that lie ahead of us soon - a whole new outlet of support and answers to many of our questions on how to live in our new city. Plus, we’ve found that it keeps us on top of organizing our pictures and stories and keeping track of our time over here. Future Montgomery’s, you’re welcome.