From Italy to Switzerland to the Netherlands: Expat Since Birth

I'm Ute Limacher. My passport says I'm German but I never lived there.  I grew up in Italy, moved to Switzerland, then back to Italy before coming to the Netherlands in 2005. – I'm an "expat-since-birth", an "european ATCK (Adult Third Culture Kid)".

1. Why did you move abroad?
I was already born "abroad" and just kept moving. When I was 18 I moved from Italy to Switzerland, then after my studies and 8 years of work, I spent almost 4 years in Florence (Italy) for work. Since 2005 I live in the Netherlands because my husband did find a job here.

2. How do you make a living?
I was researcher, teacher and translator and am now teacher and writer and I'm soon going to be an european expat counsellor and coach.

When I came to the Netherlands I had to reinvent myself. This took time and energy but it was also very interesting and exciting because I discovered new aspects of my personality and enjoyed its cathartic side effects.

3. How often do you communicate with home and how?
"Home" is actually where I am now and the people who are part of my daily life here in the Netherlands: I communicate with them every day.

If with "home" you mean parents, extended family and friends abroad: we have our weekly phone calls with family and occasionally contacts via phone, skype etc. with friends.

4. What's your favorite thing about being an expat in the Netherlands?
I love the freedom, the international and multicultural environment here in The Hague. It may sound strange from someone who did spend most of his life in Italy, but I really like the weather. It's not too hot in the summer, not too cold in the winter and this vast sky: it's just great! – You need to get used to the "four seasons a day" in fall, but this constant change has something refreshing.

Dutch spend a lot of time outdoors and I love this! No matter if it rains or not, they go outdoors, whereas in Italy if it rains only a little bit, people starts complaining and stays indoors...

I grew up close to mountains in Northern Italy and lived many years in Switzerland. I always considered the seaside something that has to do with vacations. Now we live close to the sea and I have the impression to always be on vacation.

5. What’s the worst thing about being an expat in the Netherlands ?
That The Hague is so far away from Southern Germany (where my parents live), Switzerland and Italy.

6. What do you miss most?
To be honest, I don't miss anything anymore. During the first two years I missed my job, my career, my life as working mum. But like I said in 2), I did reinvent myself and am happy with how things are now.

Life is very easy in the Netherlands and I do appreciate the life we have here. This doesn't mean that I don't enjoy our time abroad. On the contrary, I just try to live in the moment and not to long for something that is just too far away.

7. What did you do to meet people and integrate in your new home?
I went out, tried to meet as many people as possible. My first priority was to learn the language alongside my son who was 2.5 years old when we moved here. This helped a lot, not only me to get integrated but also my son to make new friends.

I signed up for several courses, workshops and, the fact that I got pregnant with my twin-daughters a few months after we arrived, which did force me to learn all the vocabulary related to pregnancy, health care system etc.

8. What custom/ habits do you find most strange about your adopted culture?
None. Really. I respect and can understand every Dutch habit and it all makes sense to me.

9. What is a myth about your adopted country?
That "Dutch people don't cook" or "don't cook well" or "don't know how to cook". – I have many Dutch friends who are excellent cooks and on the other hand I know many Italians, Swiss, Germans etc. who are not good at cooking... It really has nothing to do with nationality but with the character, priorities etc. (I wrote a post about this too: http://expatsincebirth.com/2013/01/19/about-the-not-so-well-known-dutch-cuisine/)

10. Is the cost of living higher or lower than the last country you lived in and how has that made a difference in your life?
The cost of living is higher than in Italy (Florence) but definitely lower than in Switzerland! Since we're visiting Switzerland 2 times a year, we see the difference. Generally, the quality of food here is better too. There are many local markets. We had those in Italy too, whereas in Switzerland this is harder to find.

The general cost of living is affordable, in my opinion, and it didn't really make a difference in my life.

11. What advice would you give other expats?
I would recommend to learn the language – and insist that every local talks Dutch back to you!

If you observe very carefully and closely the locals, you will understand many things about the culture, their habits etc.. And get a bike, it's really the best mean of transportation. Generally I always advice to observe and listen carefully and then copy. Copying helps to adapt easier. 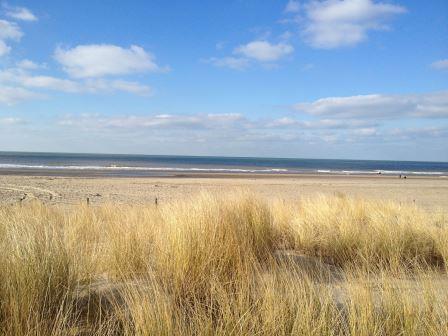 I did start my blog a bit more than a year ago. I had written many articles about several topics and wanted to write a book, but friends recommended to start blogging instead. I really appreciate the immediate replies to my posts, the very interesting dialogues with the readers. – I was used to write scientific articles and would have liked to have quicker responses.

The bloggosphere is very inspiring and a world apart; a great experience that I don't want to miss!