From Seattle to Denmark to Brazil: Live in Brazil

Kevin Porter, originally from Seattle, WA, USA and residing in Florianópolis, SC, Brazil while doing some stints in Denmark.

1. Why did you move abroad?
Since a young age, I’ve always felt like a cultural misfit.  I would observe people living a type of gloomy monotony and dreamed of the opportunity to go abroad.  Something about the Latin cultures struck a chord with me and it just felt like I was at home with their culture, climate and language.

2. How do you make a living?
Being a sort of serial entrepreneur, I’ve played around with a lot of money-making ideas to support our expat life-style (my poor wife had to grit her teeth through some!).

More recently, I’ve kind of become the communities go-to guy for all things Brazil and so I created the site www.liveinbrazil.org, where people have kindly solicited my coaching and relocation assistance to make their landing in Brazil softer.

During the time I’ve had this blog, I have heard thousands of stories both bad and good, and one of the common themes is that people end up going back home due to being frustrated about not being able to communicate in Portuguese (a must in Brazil!).  So I’ve made my wife grit her teeth once again and started a course for our community to learn Portuguese fluently.

3. How often do you communicate with home and how?
That’s a tough one to answer as my home has really become where my family and heart is.  I feel that wherever my lovely (and patient) wife and children are, this is my home.  I guess these “strings of attachment” die down after being abroad for so long and you no longer feel attached to your culture of origin – a global nomad if you will.  I do call my lovely mother every now and then to chat though.

4. What's your favorite thing about being an expat in Brazil?
The people: they are amazing, open hearted, kind and giving.  I want this to be instilled in both my family and me.

The language: it’s hard to match the passion and expression in Portuguese and it is a real delight to speak the language.

The food: Living in a sub-tropical paradise (I.e. Brazil’s Maui) and getting fresh bananas, mangoes + all the creature comforts you would want from back home.

The relationships: Brazil is a real relationship based society and everything happens through amizades (friendships), so everyone get’s to be buddy-buddy all of the time.

5. What’s the worst thing about being an expat in Brazil?
Bureaucracy: Brazil is known for it, this can be in the form of government institutions or culturally as well.  Being relationship oriented means that tasks take a second place on your priority list.

6. What do you miss most?
Consumer goods: the USA is the Mecca for great selection and cheap prices, I definitely miss the ability to have so much buying power – then again this can be fixed by arranging a quick flight over.

7. What did you do to meet people and integrate in your new home?
I Threw myself out there and just was as extrovert as possible, this is how things happen in Brazil.  Fortunately, I did already learn Portuguese fluently and that kept the doors wide open.

There’s a lot of new things to learn when moving abroad but this becomes easier when you have good people to back you up locally.

8. What custom/ habits do you find most strange about your adopted culture?
No matter how hot or cold it is in Brazil, babies always wear socks!  It could be blazing hot and they need their socks on to “not catch a cold”.  The fear of reign (especially funny for my Danish wife), everyone runs and hides when it starts raining, then there are these weird gringos (foreigners) who just put rain gear on and hop in the mud puddles.

9. What is a myth about your adopted country?
That everyone is dishonest and ready to cheat you.  Some Brazilians can be shame-less people ready to take exploit you, though if you keep your guard up and are aware of these types of people, you can fend them of easily.

The truth of the matter is, that my Brazilian friends are some of the most honest, trustworthy people period.

10. Is the cost of living higher or lower than the last country you lived in and how has that made a difference in your life?
MUCH lower as the last country was Denmark (which is known for being the second most expensive country in the world), though with that said, consumer items are more expensive in Brazil.

The best thing you can do as an expat in Brazil, is to bring all of your belongings with you in the move as imported products are taxed at an insane rate.  Housing, food and those things are much cheaper though.

11. What advice would you give other expats?
If you are considering moving to Brazil, consider making good connections before you come – it’s all about who you know.  I’ve made it a point on my site to provide practical how-to information that you can implement and use to make your transition easier (including what no to do fueled by my stories).

Learn Portuguese (or the local language in other countries) as quickly as possible as your survival and ability to thrive will depend on this. 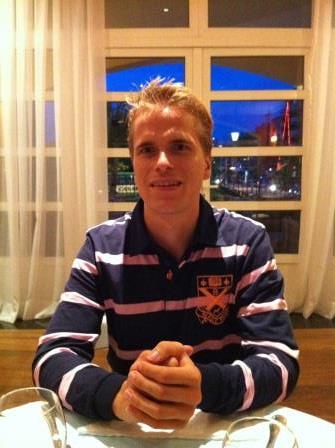 I saw a strong need within the community for an organized site with practical and value-bringing information.  A lot of it had to do with my personal hardships that I didn’t want to see anyone else go through, and to provide a platform for us gringos to “spring” off of, in order to start a meaningful life in Brazil!

I then took it a step further and created a free video series called the “Golden Ticket to Brazil” to walk us through the successful elements of a life in Brazil :)