From Canada to the French Alps: Crystal Goes to Europe 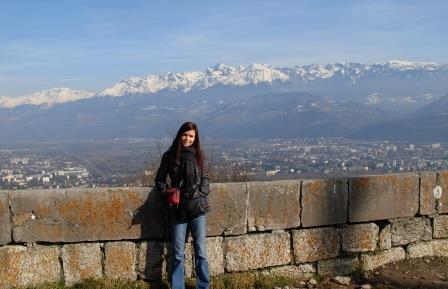 Bonjour! I’m Crystal, an Anglophone Canadian expat currently living in a small town near Grenoble in the French Alps with my French husband, one big furry cat, two hairless cats and a small brown dog.

1. Why did you move abroad?
I decided to do the English Language Assistant program in France just after graduating from university in my native Canada in 2005. It was supposed to be a 9-month contract at a high school in the north of France, after which I’d return to Canada and start my “real life”. But, as is often the case, I was charmed by a handsome French man and never moved back!

2. How do you make a living?
I was an English Language Assistant in 2005-2006, and for the 6 following years, I worked as a business English trainer for 2 different language schools (in the north of France and in Paris).  Since moving to the Alps in 2011 for my husband’s job, I’ve worked in tourism and English training, and am doing some freelance writing.

3. How often do you communicate with home and how?
I call my parents once a week, and mainly depend on the internet (Facebook, email, Skype, my blog) to communicate with friends and family back in Canada and in other parts of the world. I’d be lost without the internet! And when I get really homesick, I’ll go back for a visit.  I’m lucky that I’ve been able to visit Canada about twice a year since moving to France.

4. What's your favorite thing about being an expat in France?
My French husband, Max! I also like the (non-meat) food like pastries, breads, cheeses and wines. And, for such a small country (compared to my native Canada), France has some really beautiful and diverse landscapes.

6. What do you miss most?
Besides family and friends, I miss the convenience of life in Canada and the fact that there are fewer people there. France’s population is double that of Canada’s, and it can be overwhelming here sometimes when there are people and cars everywhere, all the time.

7. What did you do to meet people and integrate in your new home?
I’ve changed regions 3 times in 7 years, so it can be hard to make and keep friends when you move around a lot. My blog helped me connect with other Anglophone expats in France, and I’m still close with many of them. I also tend to make friends with colleagues because we are usually all expats with similar lifestyles and understand each other a lot better than a French person might.

8. What custom/ habits do you find most strange about your adopted culture?
The French tend be quite reserved, but then they have no problems kissing perfect strangers! What I mean by that is the custom of “les bises” where you kiss someone on the cheeks 1-4 times depending on where you are in France. I like meeting new people, but I wish just a friendly wave to say “hello!” was enough without having to do the cheek kisses!

9. What is a myth about your adopted country?
That all French men are great cooks…lol! My French husband has a hard time boiling water.

10. Is the cost of living higher or lower than the last country you lived in and how has that made a difference in your life?
I’d say the cost of living is definitely higher in France than Canada, mostly due to taxes, the price of petrol and the cost of real estate here. But I do find the food cheaper in France than in Canada. A great hunk of French cheese and a bottle of wine might only cost a few euros while in Canada wine is really expensive!

11. What advice would you give other expats?
No two countries do things exactly the same way, and constantly comparing your native country with your adopted country will only lead to disappointment and resentment most of the time. Embrace your new country for all its qualities and its flaws, and keep an open mind. 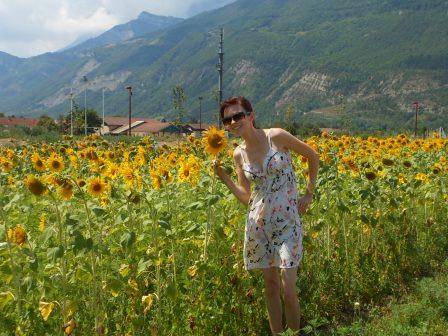 I started my blog, Crystal Goes to Europe, in 2005 just before leaving Canada to come to France. I had originally made it as a way of keeping in touch with friends and family while I was away, but it quickly evolved into a place to document my (permanent) life in France. It began as a fun travel blog, and is now a place for me to connect with new people, vent about the ups and downs of being an expat, post cute photos of my pets, and keep my parents up-to-date with my daily life!