From the USA to Russia: A Girl and Her Travels 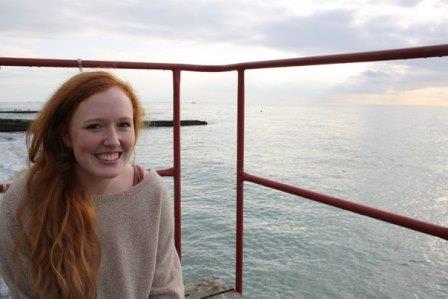 I'm Polly Barks – an ESL teacher, freelance writer, and blogger. I moved from Small Town, USA to one of the largest cities in the world, Moscow.

1. Why did you move abroad?
Rather unexpectedly (even to myself) I graduated from university one year early with a double major in Russian Studies and International Relations. At the tender age of 21 I decided I wasn't ready to invest myself in a career with a 40-hour, in-office job quite yet. Instead I decided to put my Russian skills to the test and move to Russia. I had originally planned to live and work in Moscow for one year. Three years and counting: I'm still here.

2. How do you make a living?
I'm an ESL teacher. I originally came to Moscow through a large English company which provided visa support, accommodation, and training. I ended up teach all ages and levels of English which, while mentally draining at times, was a great baseline of training. I have since moved to a smaller company where I focus mainly on corporate English.

I have also parlayed my experience abroad into various freelance work. I use my expertise on living in Russia as an expat to write how-to guides and personal pieces for various publications. Every expat who enjoys writing should give this a try – not only is the extra money nice, but having published work is always useful in your personal portfolio.

3. How often do you communicate with home and how?
I'm pretty terrible at keeping in touch, but the abundance of technology helps me a little bit. Moscow and other major cities in Russia are modern and you'll have access to high-speed internet for all your Skype needs.

4. What's your favorite thing about being an expat in Russia?
Speaking strictly about Moscow, I really enjoy the duality of living in a culture that is in turn totally accessible and completely foreign. On one street in Moscow you'll see Starbucks, McDonald's, and an H&M. You'll also see small cafes offering traditional Russian food, an accordionist, and buildings adorned with a massive soviet hammer and sickle. You can hear a veritable UN of languages as you walk down the street, but are often forced to practice your Russian with many of the non-English speakers of the city.

For me, coming from a small town, I also enjoy the benefits of living in a big city. Moscow is easily accessible by public transport, full of gorgeous parks and ponds, and open 24/7.

5. What’s the worst thing about being an expat in Russia?
Russia is a very conservative country and quite different culturally than the USA or European countries. It's hard to see a country I've come to love struggle with social and political issues. It's often a difficult situation to find yourself in, especially when trying to reach a common ground with Russian friends.

6. What do you miss most?
Of course I miss my family back home. But beyond the obvious: in the past three years I've really felt that Russia has become a second home to me (although with a love-hate relationship), so I'm happy to say that the things I miss most are pretty inconsequential. Peanut butter, Mexican food, and cheap electronics rank high on the list.

7. What did you do to meet people and integrate in your new home?
I was lucky to integrate with a group of great people my first year in Russia. Having a set group of friends (both expat and Russian) was really great – and pretty common if you work with a large school. Beyond that, I went out a lot and met new people at clubs and bars. The Moscow expat community is quite tight so I was introduced to a lot of people that way.

I also spoke Russian when I arrive to Moscow. I would encourage anyone planning to move abroad to learn the language first – not only will it make your day-to-day life so much easier, but you'll be less likely to fall into the trap of only having expat friends.

8. What custom/ habits do you find most strange about your adopted culture?
Anyone who knows me will have probably heard me talk about Russian tapochki (slippers). It seems that Russians are required by law to wear slippers inside the house. Not only should you have your own slippers, but it's best to have 20-30 others for various guests. As a pro-barefoot person, I find this concept hard to adapt to.

One custom that I really dislike is the practice of only the men shaking hands. I've walked into many corporate English classes where the students are all men – they will shake each others' hand but completely bypass me.

9. What is a myth about your adopted country?
Imagine Russia. What do you see? Bears and lots of vodka. Bears: they don't really walk down the streets of any (major) cities. Sorry. Vodka: Russians still do drink a lot, but not at such mythical levels. I think a lot of this has to do with the high rates of alcoholism (and death from alcoholism) after the collapse of the Soviet Union. That being said, vodka is incredibly cheap and imbibed quite freely throughout Russia.

10. Is the cost of living higher or lower than the last country you lived in and how has that made a difference in your life?
Coming from the USA, the cost of living compared to home varies. The expensive: housing, restaurants, clothing, and electronics. The cheap: transport and basic food items.

I don't know that it's really made a difference in my life. English teachers in Russia are paid pretty high rates compared to average Russians, so your standard of living will be pretty high. I do notice that it's really easy for me (and other expats) to spend several hundred dollars in a weekend which I would never do in the States.

11. What advice would you give other expats?
Don't think of Russia as part of Europe. Most people who have fled Russia and been really unsatisfied complained about the standard of living. Even in Moscow, you should expect soviet-style flats, dirt streets, and a general non-European feel. This is not to say that Russia isn't an interesting place to live; just keep your expectations managed and you'll be pleasantly surprised.

12. When and why did you start your blog?
I started this blog in 2012 as a way to document my life in Russia (for the benefit of friends and family) and to share some of what little I know to people who are crazy enough to think about moving to Russia!

Polly's blog, a girl and her travels

Find out more about being an expat in Russia with EasyExpat's