The path to becoming an expat can take many different routes. From falling in love and following your partner overseas to moving for adventure to studying abroad - there are many ways to start a new life in a new country. The latter is becoming increasingly popular with the amount of students studying abroad between 1980 and 2010 tripling. HSBC reports that "...more than three million people are studying for an undergraduate or postgraduate degree in a foreign country."

We often hear on expat blogs and in our series of expat interviews how a semester abroad can turn into a year, 10 years, a lifetime abroad. Programes like the European Erasmus program (EuRopean Community Action Scheme for the Mobility of University Students) make studying abroad easier than ever with compatible courses, grading system, and scholarships. Along with the benefits of an education, students that study abroad may gain greater independence, understanding of the world, and life experience.

While this may be a boom to the personal lives of newly minted expats, there can be a significant cost to the students and the countries. To evaluate this cost, HSBC has conducted a study on the cost of student life in thirteen countries. 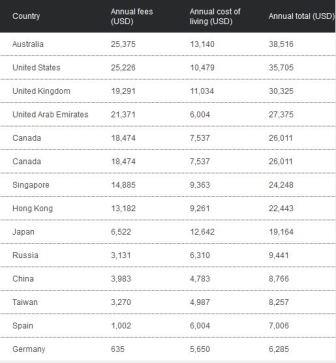 *Fees represent the average tuition cost for international students based on the top 10 largest institutions in each relevant country.

Important Notes about the Study

"With rising affluence, particularly in developing markets, and an increasingly competitive workplace that demands quality skills and a global outlook, we expect appetite for international education to continue to grow. Even though the market for higher education remains segmented and therefore mispriced at an international level, the cost is going up everywhere as government subsidies are rolled back....Those who wish to educate their children overseas have to factor in tuition fees, living costs, exchange rates and inflation. There is a need for parents to ensure their children's education forms an important part of their financial planning."

What this data means for students and the institutions is that costs will continue to rise. Countries like England are already significantly increasing their tuition fees. This has implications for students attending higher education in their home country, but it cannot be underestimated that these increases especially effect expat students who must also pay for trips home and exchange rates. Students and their families must plan their budget carefully and understand the costs associated with tuition and cost of living no matter where they are located.

Are you planning to study abroad or have you studied abroad? Was the cost manageable? What questions or advice do you have to share?