From Oklahoma to South Korea: Lost in Travels 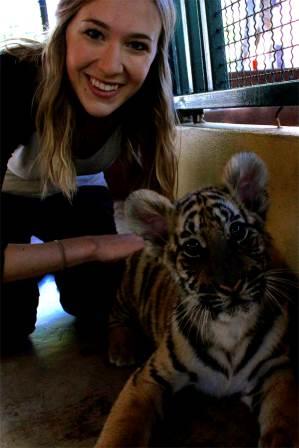 After getting hitched to my man, we both started getting cold sweats at the thought of 'settling down'. We wanted something different, something exciting, something adventurous. So we did the only logical thing; sold all of our belongings and moved half way around the world from Oklahoma to teach English in South Korea. Makes sense right? Follow along on our world travel adventures and as we try to figure out newlywed expat life in the land of kimchi and rice.

1. Why did you move abroad?
My husband and I first moved because we wanted something out of the ordinary after we got married. So instead of settling down in our hometown, we packed our bags and set off on an adventure. We currently both teach English to adults.

2. How do you make a living?
Neither teaching nor living abroad were originally the plan in my husband’s and my life. He had graduated with a degree in aeronautical science and shortly before getting married; I had finished my degree in Fashion Marketing. We were starting to plan our future lives together when the calling to travel and for a unique beginning to our married lives set in. My husband, Jeremy, had a college roommate that had just finished teaching English in Korea and was able to help us find a job. It was the perfect opportunity for us to experience a new culture, travel the world and save money at the same time. Since arriving here almost three years ago we have taught all ages from 4-60. We started out at a typical after school academy teaching kindergarten to middle school but currently work for a shipbuilding company teaching business English to adults. We loved the kids but we enjoy teaching adults much more!

3. How often do you communicate with home and how?
We try to talk to everyone at least every few weeks. As the years go on we definitely communicate less but we feel those relationships are still so important to us so we really make an effort to stay connected. We use several different methods including skype, facetime and gchat but our favorite of them has been facetime because it has the clearest picture and cuts out the least amount.

4. What's your favorite thing about being an expat in South Korea?
We really enjoy how feasible and accessible traveling to other countries is. In the two years that we have been here, we have been able to travel to several different countries and always enjoy researching where to go on our next adventure.

5. What’s the worst thing about being an expat in South Korea?
Some of the times that we wanted to find the first flight out were times when we were missing big moments in loved ones lives. We knew moving over here that it was inevitable but when the time actually came, it was a lot more difficult than we could have ever anticipated. We have missed engagements and weddings of close friends and the birth of my niece. These are things that we knew we would miss when we signed ourselves up for it, but it’s still hard when it became a reality.

6. What do you miss most?
Besides family and friends, I miss being able to run to the store and get exactly what I need. Whether it is a new piece of clothing or a certain ingredient that I need to make dinner. Being 5’8” clothing is a challenge in itself. I can sometimes find tops but most pants look like capris on me. Also, so many of the recipes that I use call for ingredients that I never thought would be difficult to find here or I never thought would cost as much as they do (hello nine dollar sour cream and fifteen dollar oat meal)!

7. What did you do to meet people and integrate in your new home?
We were fortunate enough to get ‘set up’ in a sense by friends that used to live in the same city. We have also gotten involved in a local foreigner’s church, which has become like family to us. We have built a tight community over here that we know we can turn to and rely on. It’s made the whole experience not only easier but also more gratifying.

8. What custom/ habits do you find most strange about your adopted culture?
Living in a different country, you are constantly bombarded with cultural differences. The one that I have the hardest time with is the drinking culture in our town.  If you walk around town late at night, there are drunk men stumbling around, passed out on the street, or even passed out in their running car. I often have students coming to class still drunk or hungover from the night before. I know drinking is common everywhere, but I have never seen it to this extent before.

9. What is a myth about your adopted country?
That it’s third world. I don’t know how many times I’ve been asked this before we decided to move here. But no, in fact it’s quite far from a third world country. For starters, it is in the top five for the fastest Internet in the world and is home to companies such as LG, Samsung and Kia. It’s a lot more westernized than people think.

10. Is the cost of living higher or lower than the last country you lived in and how has that made a difference in your life?
We were pleasantly surprised to find out that as far as rent and utilities, living in Korea is much cheaper than in the States. But as far as groceries go, I’ve never missed Walmart so much in my life. If you eat seasonally, it can be affordable but we’ve had to find alternatives to the foods that we miss from back home because it can get quite expensive. The biggest difference is the taxes. They are much lower than the states, which has enabled to save a lot more than we would have living back home.

11. What advice would you give other expats?
Adapt and be flexible. Living overseas has taught me to be extremely flexible. Obviously every culture is extremely different and has different quirks about it. Things that may make you laugh or drive you crazy. As an extreme planner, I like to know ahead of time what I’m going to be doing or where I will be at in the week. Working in Korea, that’s not always possible, plans and schedules can change in a blink of an eye. I have learned to put my personality traits aside and go more with the flow, which makes my work life a whole lot more pleasant.

12. When and why did you start your blog?
I started this blog when my husband and I discovered that we were both terrified of the idea of 'settling down' after getting married (you know, house, car, and little things running around in diapers). After moving to Korea, I wrote as a way to stay in touch with friends and family, and more importantly, to keep those skype dates under control by already clueing them in on what was happening in our lives.

Since then, it has turned into a 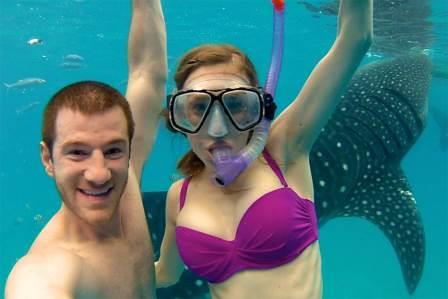 place where I not only share pieces of our everyday lives as expats in the land of kimchi, but also where I document our world adventures and travel tips. I hope that it can be a place where people can collect inspiration and advice for their next adventure.