From New Zealand to Moscow to Helsinki: Setting Sail with the Fitzys

I am Tony Fitzpatrick, I have lived pretty much my whole life in Blenheim, a small rural town New Zealand with some breif escapes during my early 20’s, and for the past 3 years have lived with my family (wife and 2 children aged 6 & 10) in a small sun filled cottage with an alternative power supply, on our 20 acre block in the Marlborough countryside, with not a neighbour in sight.  In September last year we left this behind for a 4th floor apartment in Moscow, Russia heading for an adventure in a strange land, and have since moved on to Helsinki, Finland before finally heading to Tokyo, Japan later this year.

1. Why did you move abroad?
My wife and I haven’t managed to travel as far as our dreams would have taken us, and after a lifetime of living in the town of our births, and being self employed for the past 15 odd years, which meant we were pretty much enslaved to our businesses, we decided enough was enough, and that as one of us needed to get a job outside of our businesses it might as well be overseas as in New Zealand. As I don’t have any formal qualifications, we decided to look for teaching jobs for my wife who has a Diploma in Teaching and plenty of experience. We started applying for whatever pre-school teaching jobs were going in far flung locations and in a very short time secured a job in Moscow.  We packed up our farm, handed our businesses over to managers and left on the adventure of a lifetime.

2. How do you make a living?
My wife is a pre-school teacher so in Moscow was employed in this capacity, I have continued to operate my own architectural design business remotely with a staff member in the office back home doing the majority of the work.  Unfortunately the business my wife went to work for wasn’t very well run and was struggling to survive so my wife got laid of after only 6 months, hence our move to Helsinki, Finland, where luckily I have a brother living.   He is also an architect, so managed to get me a consulting position in the company he works for while we are here and had a friend with a vacant apartment we could rent while here, so things worked out well.  In the 10 days we had to move out of Russia my wife was lucky enough to apply for and get accepted for another job in Japan, so we are looking forward to heading there later in the year.

3. How often do you communicate with home and how?
Due to the wonders of modern technology we can communicate with home quite frequently, probably once per week or better.  The main means of communication is Skype, followed by Facebook and email.   This is quite a contrast to my previous overseas experience when I travelled to Japan for 3 months in 1990/91 where communication with home was via letters and collect phone calls, hard to believe how far we have come in that time…..

4. What's your favorite thing about being an expat in Moscow?
The fact that it is a big, busy and bustling city full of history and things to do.   There is so much to do in Moscow as a family that doesn’t cost the earth like it would in other cities around the world.  While it is touted as one of the most expensive cities in the world, this is an undeserved title, there is so much to see and do that costs next to nothing, and on certain days some attractions are even free.

Also the Metro system was incredible, a train leaving any station going to where you need to go every 2-3 minutes, a simple single price fare structure for wherever you want to go (and low priced at that).   In 6 months travelling on the Moscow Metro I expereinced less queueing, less breakdowns, less confusion and less route closures than 5 days of using the London Underground

5. What’s the worst thing about being an expat in Moscow?
The worst thing about Moscow is the traffic, it is one busy city full of crazy drivers all wanting to get from A to B as quickly as they can and they will use any means to achieve this, including speeding, shooting red lights, cutting off other vehicles, crazy U-turns, speeding through pedestrian crossings to try and get through before you get to their lane and even using the footpath to get past the vehicles queued in front.  The effects of this are multiplied when you throw in winter roads covered in fresh snow, slush or ice.  You would be well advised to tread carefully when you are near a road in Moscow, and to save time and stress take the Metro.

6. What do you miss most?
While we miss our families and friends dearly, one of the main things we miss are the animals we had to leave behind or get rid of before we left (Horses, sheep, pig, goat, cats, dogs and chooks)

7. What did you do to meet people and integrate in your new home?
With 2 young children and being winter it was a bit hard to get out and meet people, however my wife had some good workmates we would see regularly, and as I was the stay at home dad, I went out and got a part time English teaching job, basically just to be able to meet some locals on a regular basis.   We tried to pick up the language and use this wherever possible to develop our vocabularies, which made it easier to do the basics like grocery shopping, etc.

8. What custom/ habits do you find most strange about your adopted culture?
Can’t think of any that we found strange, the one we did find quite warming was the way in which Russians will always give up their seat on the Metro or bus for a child, family or elderly person, something which I have not really noticed as much at home as I have here in Moscow.

9. What is a myth about your adopted country?
We went to Moscow aware that it was a pretty unsafe city to live in (as well as being expensive), and found the exact opposite, not once did we ever feel threatened, weary or unsafe in Moscow at any time of day or night, no matter where we were.   In fact we felt safer getting around in Moscow than we would in any city in New Zealand after dark or even in our own home town.   Sure if you do stupid things you could expose yourself to dangerous situations, much the same as in any other city in the world, but in general it is far safer than many sources would have you believe.

10. Is the cost of living higher or lower than the last country you lived in and how has that made a difference in your life?
We found Moscow surprisingly cheaper to live in than our home country in most aspects of life (as our accommodation was paid for by my wife’s employer so we didn’t have to worry about that).   This actually allowed us as a family to go out and have a life and do fun things together at the weekends, we could travel all over Moscow and check out parks, zoos, museums, shopping centres and other attractions all for very low cost.

11. What advice would you give other expats?
Make sure that you experience life as a local, don’t restrict all your sociallising to expat communities and shopping areas or shut yourself off from the local culture. You will discover a whole new world out there, new people, new attitudes, new flavours and new experiences which will broaden your own horizons and make you a better person as well. Find a good local friend, they will be pleased to show you how they live and the places they go. 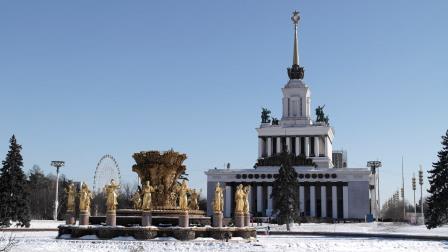 12. When and why did you start your blog?
I started my blog in September 2012, initially as a way of keeping our friends and family informed of our adventures, but then I saw it as a means of sharing knowledge and experiences with other people who are interested in Moscow and Russia and tried to incorporate some informative posts as well as updates on our family. I will continue to develop it along the lines of an informative blog for potential and new ex-pats trying to find their way in new places as we work our way to Japan and beyond.

Find out more about being an expat in Russia with EasyExpat's