As June draws to a close, so does the LGBT Pride Month. Commemorating the Stonewall riots in New York City of June 1969, the community has worked continually to promote equality. Pride events were established to bring attention to the cause and celebrations, parades, and demonstrations are now held around the world.

Earlier this year we covered the "Gay Rights Movement Around the World". There have been some exciting improvements this year such as legalized Same-Sex Marriage in New Zealand, France, Uruguay, Brazil (federal & several states), and several US States. However, there are still significant obstacles such as anti-LGBT laws with penalties that include fines, jail terms, or even death in different parts of the world.

Born and raised in the Pacific Northwest, a bastion of liberal-minded thinkers and Equal Rights activists, I have somehow managed to move to a place even more open-minded - Berlin. One of the many reasons I love this city is for its "anything goes", "live and let live" attitude. Germany has been one of the more progressive European nations for LGBT rights and Berlin's history with cabaret is deeply intertwined with the homosexual community. In the 1920s and early 1930s, the area around Nollendorfplatz in the neighborhood of Schöneberg was the center of gay life. Now the city's same-sex scene is not restrained to one area, but is embraced by the city at large.

So I expect a lot from Berlin's Pride Events. Erm- I mean "Christopher Street Day". I mean - what?

Largely known simply as "Pride" in the USA, Gay Pride celebrations in Berlin actually reference the incident that started the first pride parade.

On June 28th, 1969, a riot of lesbian, gay, bisexual, transgender and questioning people rioted after police raided the Stonewall Inn, a gay bar at 43 Christopher Street in New York City. Despite violent opposition, the community refused to be pushed down and by November of that year, several community leaders had decided to make even more noise. Craig Rodwell, Fred Sargeant, Ellen Broidy, and Linda Rhodes proposed the first pride march with this statement,

At first there was resistance, even among different homosexual rights groups. Funding such an event was also in question. But the core group persevered and secured donations and even extended the march from a single event, to a week-long series of festivites.

The movement has gained momentum around the world with parades and events taking place in almost every country. Usually known as Christopher Street Day (CSD) in Europe, Berlin's events attract some of the largest crowds on the continent with around 500,000 people appearing in costume, dancing, and celebrating. 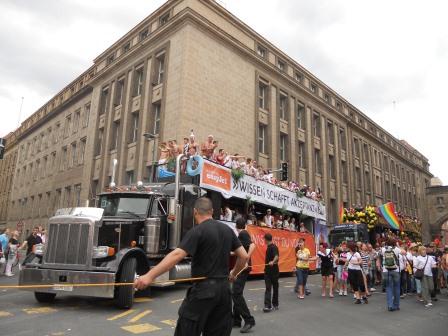 When? June 22nd, 2013 at 12:00 (noon). There are after parties galore that will continue deep into the night, and well into the rest of the weekend.

Where: Parade starts at Kurfürstendamm/Joachimstaler Straße and ends at Brandenburg Gate.

Germany currently provides legal recognition for same-sex unions in the form of registered partnerships and there is an increasing percentage of the German people that express their support for allowing same-sex marriage. Hopefully events like tomorrow's parade will continue to sway the dissenters. See you there!

To attend the event, use the comprehensive Guide to Berlin to plan your travel, accomadtion, and more.

To participate in other festivals and pride parades, check out Pride Events Around the World.

The parade was - as usual - a wonderful, ridiculous, lavishly costumed affair.

I also learned more about an independent event in Kreuzberg that eschewed corporate sponsorship and political party's participation. It was much smaller, less glamorous, and yet fulfills a need for the community.

The USA has also made giant strides since the parade, striking down the Defense of Marriage Act (DOMA). As the ruling was announced, supporters who had been waiting with bated breath finally exhaled. However, there are still more battles to be held and a long way to go.

But for now, let's celebrate!