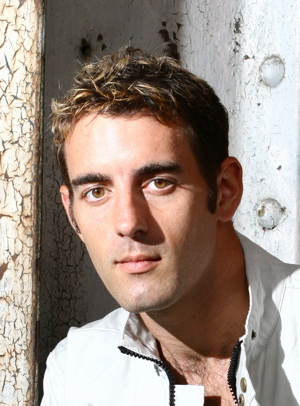 Tony James Slater is the author of crazy travel-comedy ‘That Bear Ate My Pants!’. He is a very, very strange man. He believes himself to be indestructible, despite considerable evidence to the contrary. He is often to be found making strange faces whilst pretending to be attacked by inanimate objects. And sometimes - not always, but often enough to be of concern - his testicles hang out of the holes in his trousers.

It is for this reason (amongst others) that he chooses to spend his life far from mainstream civilization, tackling ridiculous challenges and subjecting himself to constant danger. He gets hurt quite a lot.

1. Why did you move abroad?
Well, I came to Australia for pretty much the same reason everyone comes to Australia: I was broke, and I had no choice. Okay, maybe that’s not the most common reason… but I’d been living in Thailand, y’see. I’d gone there for three months, to do a spot of volunteering at an animal clinic, and accidentally-on-purpose missed my flight home. I ended up staying for a year, diving for a living and generally having a great time – until I ran out of cash. Diving isn’t renowned as a quick path to riches – and anyway I was rubbish at it – so my options were fairly limited. I couldn’t afford to fly home, and I really, really didn’t want to, either. Partially because I didn’t want my grand adventure to end, and partially because I was technically AWOL from the British Army. So… I emailed my sister, who was visiting a friend in Australia. They offered me a space on their couch… and six years later I’m still here! Though in my defence, I’d like to say – it’s a very comfy couch.

2. How do you make a living? Are you a fulltime writer?
Oh, I wish I made a living! I really do. In fact, I make just over minimum wage in the UK, which is, oh, about a third of the minimum wage in Australia. No, I’m serious! Luckily I now have a beautiful Australian wife (yep – you got me – this IS the friend my sister was visiting all those years ago!) – and she is good enough to go out and work to support us both, so that I can play at being a writer.

By this time next year I hope to be earning the minimum wage in Australia – which is about what the average doctor earns in the UK :0)

3. How did you start the process of writing a book and get it published? Did you go to a publisher? Self-publish?
I always knew that my adventures in Ecuador, volunteering in an exotic animal refuge, would become a book. I mean, the stuff that happened to me over there was just too damn crazy, too ridiculous, to consider not making a book out of them. But when I approached agents and publishers in the UK, none of them seemed keen. I had a sit-down meeting with a top agent, and he told me he loved my writing – but he could never sell it. Apparently, no-one wants to read about the adventures of a nobody. He told me to my face that if I had any kind of fame of following, he could take me – but otherwise, I had no chance. So I took this to heart, and decided I had two choices: get famous – and fast – or self-publish.

Two years later I gave up trying to get famous and self-published the damn thing. Any you know what? It’s worked out pretty well so far.

4. What was the hardest part of taking your writing to a book format? Did you blog before writing your book?
I’ve only blogged since releasing my book. All the experts reckon you need a blog to help promote your books, and since crazy sh*t seems to happen to me on a daily basis, it didn’t seem like a bad idea. I wouldn’t say it’s a staggering success; I currently have about six readers, and three of them are me…

5. What is your perception of the expat book market? Has it changed throughout the process?
I must admit, I never really had one. I didn’t even know there was such a niche! But now I have to say, the rise of ebooks and Amazon is the best thing that could possibly have happened to this niche – and all niche markets. With a book like mine, even if it had made it through to traditional publishing, unless it took off exponentially in the first month of sales, it would never have gotten out of the country. Now expats and English speakers the world over can buy (and read) it at the click of a button. The only downside is, if they don’t like it, they can’t use the pages as toilet paper.

6. What is your favorite part of the book?
Well, it wasn’t much fun when it happened, but I rather like the bit about when our bear escaped. We chased it all around the rescue centre, until finally it climbed a tree to get away from us. My boss looked at me and said “You like climbing trees. Climb this tree, and bring the bear down.” I said something far too coarse to record here, even though it was in Spanish (one of the first words I learnt, actually) – and he replied with “Be a man.” And that was that – in Ecuador, once your manhood is called into question, there really is no choice in the matter. So I started to climb that tree…

7. What was the most difficult part to write?
The hardest part for me was keeping it all straight it my head. I had my journal stolen from my bag before I left Ecuador, so all I had were my memories, a bunch of photographs, and a long, blood-stained letter I’d sent to my sister shortly after being mauled by our resident jaguar!

Toughest of all though was writing about the Ecuadorian girl I met, and had a brief relationship with – because of all the people in the book, she was the one I was most afraid would be hurt by reading it. But then I remembered, she can’t speak English, so that made it all alright again!

8. Besides your book, what book should everyone read?
Um… no contest, really. WOOL, by self-published success story Hugh Howey. It’s sci-fi, but you don’t have to be a fan of sci-fi to read it. It’s a gripping, near-future, post-apocalyptic, claustrophobic thriller – about the survivors, who live penned in together in an underground silo… I tell everyone I meet to read this book. Even if we’re not talking about reading books. In fact I regularly just walk up to people in the street and blurt out “READ WOOL!” at high volume. Then I walk off again. I’m bound to be arrested for it at some point. Or for public nudity.

9. What advice would you give to other expats that want to write a book?
I would say… WRITE IT!!! Do it now. There’s never been a better time to be a writer, or to self-publish. We can publish whatever we want, no matter how ridiculous (my book, for example) – and sell it as well as the best authors on the planet! I did it all myself – editing, cover design, formatting – so it cost me absolutely nothing. Well, unless you count the six years of writing, deleting, re-writing, banging my head on the desk, getting blind drunk, and then starting again… but hell, I’d have been doing most of that anyway… Ahem. Yes. Write a book. Make it good – DAMN good – then, rewrite it to make it better. Repeat this process a couple of times, ideally, because once you put it out there, if people don’t like it, they’re going to say so in their reviews. But if they do like it – and if you’re quick to thank them when they get in touch, and to correct all the typos they point out, and to admit that you do swear too much, and talk about your testicles too much – you might just get some good reviews. And that is gold!

10. What are you working on now? Do you have plans to publish another book?
I’m always working on something. Right now, it’s my third book, all about my adventures in Australia. You’ll recall that I went there because I had no choice? I was utterly broke, and at a bit of a loss for what to do with myself. Well, this is not your typical rags-to-riches story – largely because I’m still wearing rags – but it does contain the seeds of romance, as I meet my future wife and ruthlessly steal her away from my sister. It also mentions my epic attempt to climb Ayers Rock (I failed), my brief career in snowboarding (I skied off the edge of a cliff), and the fourth and fifth attempts I made on my sister’s life… Oh. And a bunch of suicidal kangaroos. Which is why its working title is ‘The Kangaroo Suicides’. Did you know, they have two penises? 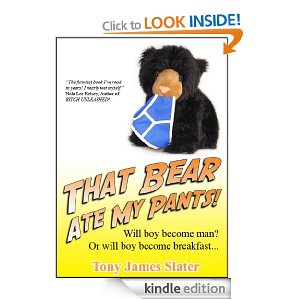 Tony James Slater went to Ecuador, determined to become a man. It never occurred to him that 'or die trying' might be an option...

The trouble with volunteering in a South American animal refuge is that everything wants a piece of you. And the trouble with being Tony, is that most of them got one.  Just how do you 'look after' something that's trying its damnedest to kill you and eat you? And how do you find love when you a) don't speak the language, and b) are constantly covered in excrement and entrails?

If only he'd had some relevant experience. Other than owning a pet rabbit when he was nine. And if only he'd bought some travel insurance...

That Bear Ate My Pants is the hilarious tale of one man's quest to better himself. Whether losing a machete fight with a tree, picking dead tarantulas out of a tank of live ones or sewing the head back on to a partially decapitated crocodile, Tony's misadventures are ridiculous, unbelievable and always entertaining. Long before Sky One got involved, there were already plenty of Idiots Abroad. This is the story of one of them...

Find the book on Amazon.com or Amazon.co.uk and check out Tony’s Blog, ‘Adventure Without End’.

Want to read more of the book and win your own copy? Leave a comment here or reach out to BlogExpat and one lucky reader will recieve a free copy!