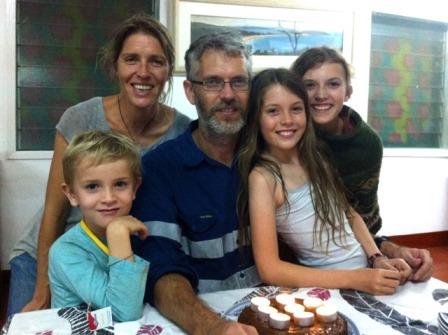 My name is Chrissie, and I’m the wife to Bill and mum to three great children; Cecily (11), Lillian (9) and Jock (6). We moved from Newcastle, Australia to Ghana. While Bill has been in Ghana for over 2 years, the children and I moved here January 2012. For the first year here, we lived on a mine site in a town about an hour and a half drive from Kumasi; the second city of Ghana. Since January this year, the children and I live in Kumasi during the week for school, and see Bill on the weekends.

1. Why did you move abroad?
My husband and I are both geologists and we had lived and worked in Canada before our children were born; and we had always been interested in living in Africa but the opportunity never arose. Fast forward several years later; with 3 children including a daughter fast approaching high school; we knew it was a now or never moment. Bill left his job working for the government and went back to industry. The job was a fly-in/fly-out job; first in Zimbabwe and then Ghana. It was a bit of a risk, as we were basically hoping his employer would agree to an expat position. Luckily they did. Fifteen months after Bill arrived in Ghana, we moved. Why Africa in particular, I’m not actually sure. I guess it gave us a feeling of great opportunity, to see a very different culture and standard of living; both of which we thought invaluable for our children to experience too. I think a lot of people feel an intangible attraction to Africa, it carries some pretty idealized notions. And Ghana we knew was a very stable, English speaking country. But nothing really can prepare you for living here.

2. How do you make a living?
Bill is the Geology Manager at a mine in the gold-rich Ashanti Region of Ghana. As part of our residence visas I am not allowed to be in paid employment; and now find myself as the dreaded ‘trailing spouse’. But it’s actually fine; with three children and facing the day to day challenges of living in a developing country I think it would be difficult if both parents were in paid employment, after all it can be challenging enough in the developed world!  While I am trained as a geologist, I haven’t worked as a field geologist since the children were born. Before we left Australia I was working part-time in the Publications section of a government geological organization. That job really got me thinking about writing; and so my blog has been a great way to keep the brain cells from atrophying.

3. How often do you communicate with home and how?
In the first year we communicated a lot; mostly through Skype; FaceTime and emails. The children enjoy the Skype and FaceTime calls as they find typing emails tedious and its always fun to see the person you are speaking to. But communication inevitably breaks down here. For example, I haven’t been able to use Skype beyond the occasional message for months now; so we’ve tried almost everything. Viber calls, our daughters love texting their friends in Australia on kik ,and I SMS (which is surprisingly affordable). But the most appreciated communication is a letter, even if it does take weeks to arrive. As we enter our second year and are developing a sense of Ghana as our home, for however long; I do find our need to communicate so regularly is diminished. My mother-in-law has also taught me the power of a short one line email to touch base is always better than a long winded email which invariably takes weeks (or months!) to write, if ever!

4. What's your favorite thing about being an expat in Ghana?
It is really different to Australia, on almost every level. Despite both countries being English speaking, language is even often a barrier. And while we were quite isolated during the first year living on the mine site, I do feel we have really seen more ‘normal’ Ghanaian life than if we just lived in the city; so it has been an amazing experience for all of us. I really enjoy the ingenuity of people to get things done with very limited resources; even if it can take a few turns (and a fair amount of frustration). I love that our children have not only seen different attitudes and lives of Ghanaians, but of other people from around the world. We’ve all had some big lessons to learn and Ghana is a very safe and stable place to learn them.

And as all expats will say, it’s the people you meet from all around the world that really makes life fun and interesting. Everyone has a story to tell.

5. What’s the worst thing about being an expat in Ghana?
It’s doing the basic stuff that gets frustrating. Like grocery shopping, which is quite limited outside of Accra; getting the car or the plumbing fixed and not introducing more problems; dealing with chaotic traffic. I worry about health care and malaria; but thankfully we haven’t had any major issues there.

6. What do you miss most?
The ocean! This is the first time I have ever lived inland, and I am amazed at how much I just want to stare at the sea. I miss the easiness of life in Australia and the lack of chaos and the sense that things can go right the first time. I miss good cheese. And of course I miss friends and family, but that goes without saying. Starting a new life with new friends can be emotionally draining, so I sometimes miss the shared history and ease of old friendships.

7. What did you do to meet people and integrate in your new home?
Kumasi doesn’t have a lot of short term expatriates and it also doesn’t have a lot of places to go! So between the golf club and the one decent hotel where you can swim and play tennis, it is inevitable you meet people who introduce you to other people and so it goes on. I always shuddered at the thought of ‘coffee mornings’, but the advice to accept every invitation is a good one because you never know who you will meet. And with no family or close friends close by, these people (and their advice!) becomes invaluable.

8. What custom/ habits do you find most strange about your adopted culture?
I’ve found plenty of things surprising since moving to Ghana! After living in the multicultural society of Australia I was naively surprised at how differently we are treated because we are foreign. Sometimes it’s positive and sometimes negative. I was surprised at how children are treated. I’m surprised at how huge funerals are in Ghana (and I mean HUGE). And people often work great distances from their families seeing them rarely, which is often an economic necessity, but as with lots of compromises here, it is accepted and not moaned about or even attempted to change.

9. What is a myth about your adopted country?
People have really clichéd ideas about Africa, which is crazy because there are 54 countries in Africa; each with several individual cultures within them. I’ve not seen an angry gun-carrying mob ever (thankfully!!); but I also didn’t see a tree silhouetted against a sunset for the first 9 months we were here; because it’s cloudy most of the year here at the Equator.

10. Is the cost of living higher or lower than the last country you lived in and how has that made a difference in your life?
Local produce is cheaper; but imported goods are often more expensive, as is ‘western’ style rental accommodation. The biggest difference is the price of labour, it is affordable to have house help which is such a luxury.

11. What advice would you give other expats?
Try not to have too many expectations and take each day as it comes. Be prepared for things to take a lot longer to get done. Life may be a lot quieter than you are used to, especially initially; and take time out just to chill. Your home really does become a haven from all the heat and busyness of the outside world. It can be exhausting setting up a new life in a new environment when there are times when everything seems different. Be resilient, be resourceful, be patient.

12. When and why did you start your blog?
I started my blog as soon as we left Australia; before we had even arrived in Ghana. It was at the urging of friends that I started it; as it seemed an easier way for people to follow our journey than the mass email (which I felt pretty uncomfortable with). This way if friends want to tune in, they can. Another big bonus is that we’ve met lots of great people through the blog. 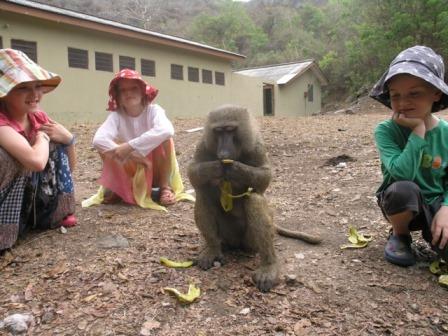 Particularly here in Kumasi, where there are not a lot of expats, it’s been a great way of meeting people. I heard that a local mine site suggested the blog to read for families considering moving here; I was so flattered!

To find out more about living in Africa