In last week's Expat chat with ExpatsRadio.com, Peter and I covered the story (and reactions)

"Do you have to learn German to live in Berlin?" 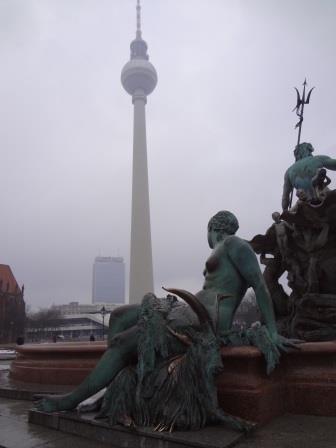 I was embarrassed to reveal that my German, after 3ish years in Berlin, is still abysmal. Schlecht. Böse. Ungut. (I am 90% sure I am using at least one of those wrong.)

The story that sparked it all was Julie Colthorpe's piece in the EXBERLINER, "Sorry, no German!". As an expat who has spent the time and energy to learn the language, she was irritated at the lackluster attempts of some of her fellow expats - expats like me. She saves most her venom for those expats with a "blasé nonchalant attitude" to learning the language and especially the restaurant owners or servers who condone the all-English approach. While I don't completely understand her acidity - each person should be able to live their life as they like - her main point is a good one.

"Ultimately if you don’t learn German, you’re the one missing out. It’s a giant city out there, and you’re shrinking your life to an expat minimum."

I am almost beyond embarrassment at this point. I have made a distracted effort to learn the language for years now, but the pressures of day-to-day life has taken precedent over learning German. The truth is, by working at home with a German-speaking husband and the ability to order a döner and navigate a supermarket, it has simply not been absolutely necessary for me to conquer the German language.

Nonetheless, I agree with Colthorpe's point that by not learning German I am not connecting as deeply as I could with the city I love. So, once again, I am re-newing my efforts to learn German. But how?

As Content Manager of EasyExpat, I have written with authority on the different methods of learning a language in posts like Talk Like a Local. Along with different learning types, I discussed the pros and cons of:

I have tried most of these at one time or another... and I have failed. Even though my husband works as an English teacher, attempts for him to teach me have been disastrous. I know that it is up to me to make this happen. My new tools include the free Duolingo app (which I highly recommend) and I am looking at language classes in my kiez (neighborhood) to enroll. (I do love using the words I actually know). But I think I have ignored another tool that can be found in almost every home - the TV.

Though I am guilty of keeping up with my favorite US TV shows online, our television showing German programming is often neglected. Sitting silently in the corner, it forlornly observes our every move. It's time for me to turn to it and let it transport me into the German-language world. Here is what I am watching...

Das Perfekte Dinner shows 5 average Frau and Herr Schmidts hosting a dinner party. A different guest tries to create the perfect meal each night as the other 4 guests wine, dine, and make snide comments to the camera. After each meal, the guests rate the meal and on Friday the host with the highest score takes home a cash prize and all the glory.

This is the only German show I watch on the regular. It has taught me to say with confidence such dining phrases as "lecker" (delicious) and "trocken" (dry)! I love the show so much I have even hosted a "Das Perfekte Dinner" event with friends and sought out the English-language UK version, "Come Dine with Me". Unlike the Germans, the Brits have an entertainment section with scoring reflecting the atmosphere almost as heavily as the food. I am always surprised that the German scores seem only to reflect how wow-worthy the meal was, and not the pleasure of the company. I'm learning so much about the German culture already...

Last night I sat down to my first episode of Tatort. This crime drama has enjoyed an incredible run since it first aired on November 29, 1970. It is known for maintaining the same title sequence for the past 30 years which is a true preview of the show to come. While I chose to watch the show in the safety of my own home and question my husband incessantly about what was happening, there are public viewings all over the city, and indeed all over the country. Every Sunday, people gather to watch the detectives solve crime, in a intentionally (or not) humorous fashion.

Within the first 5 minutes, sausage - I mean wurst - had already made an appearance and someone had been chastised for being late. German cliches! I already feel closer to the Germans.

TV Total with Stefan Raab is a late-night comedy talk show to rival the likes of The Tonight Show with Jay Leno or The Late Show with David Letterman. He not only hosts guests, but participates in some very silly stunts and local stories. Physical comedy always transcends language barriers.

Before I came to Germany, I had never heard of Herr Raab. Now I see him everywhere. The man is truly a wonder of a host. The first time I caught his show, The Rock (American Dwayne Johnson) was on and Raab interviewed and cajoled his guest, translated for the audience, and somehow had everyone laughing. I was in awe.

Even better, he has occasional specials of "Schlag den Raab". This is a live game show in which a candidate competes with the very competitive Raab in a number of bizarre challenges to win the big money. Every time I watch I am convinced something like this could never make it to air on American television. When I say challenges, I mean things as standard as table tennis, to trivia, to outlandish feats like throwing playing cards at a watermelon hard enough to make them stick. Yes, really. This type of German television has taught me much about the sense of German dignity (or lack there of), ingenuity, humor, and adventurousness.

Now, excuse me, it's time for my show. OR "Jetzt lass die Schau anfangen!" It's working already.

What other shows should I be watching to improve my German or just to enjoy? What shows do you watch in your adopted country? Or what tv shows do you miss from "home"? Tell me in the comments section!