Protesting with the Germans at the Berlin Wall

"They're tearing down the Berlin Wall!" 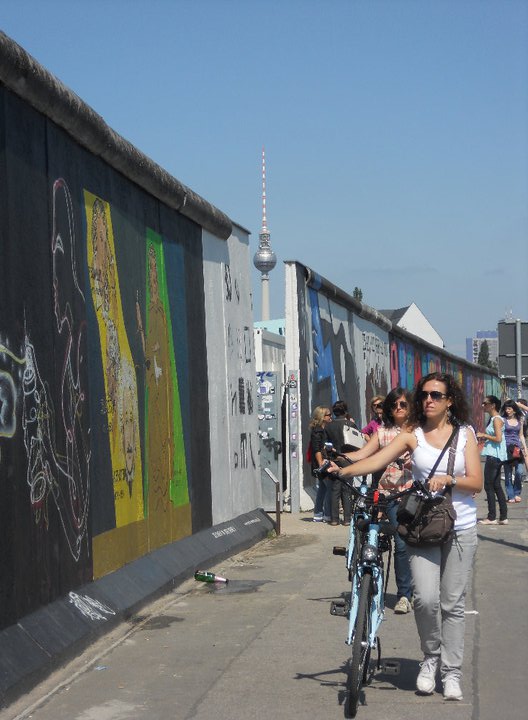 This was the rallying cry. Construction on the Berliner Mauer was begun on August 13th, 1961 by the German Democratic Republic (East Germany). The impressive barrier surrounded the area with 45,000 separate sections of reinforced concrete, each 3.6 metres (12 ft) high and 1.2 metres (3.9 ft) wide. Smooth pipes lined the top of the wall to impede attempts to scale it and it was reinforced by anti-vehicle trenches, barbed wire, armed patrols and over 116 guard towers.

By 1989, the situation was untenable. Long term civil unrest, a now famous speech by US President Ronald Reagan ("Tear down this wall!"), and a moment of confusion all played a part in crowds of Germans - East and West - crossing over the wall freely for the first time in nearly 30 years.

Within a year, the wall - the physical symbol of the repression and isolation placed on the city - was almost completely demolished. Joyful citizens, souvenir hunters, and businesses chipped away at small pieces of the wall and the new government took on the heavy lifting, using industrial equipment to remove huge sections. As German reunification was underway, there was no longer a place for any walls.

So why was I at a protest to keep the wall?

The Local (among many other news sources) reported on the protest.

"Up to 6,000 people Sunday thronged the area along the longest surviving stretch of the Berlin Wall in a growing protest against plans to knock down a section to make way for new luxury homes."

As an expat, I was shocked. As a Berliner, I was outraged.

Gentrification is always an issue in growing cities and in Berlin - city of cranes - this struggle has become a battlefield. Since the wall came down, Berlin has struggled to find the balance between old and new. As an American expat in Europe, I sympathize with the tourists who come to Berlin wanting to see how the city was. I also sympathize with city officials and citizens who know the city needs to continue to develop. A city is not a museum. It needs to be a place where people can live, work and do business.

"An international memorial for freedom", this 1.3 km long section of the wall is what most tourists search out. Over 100 paintings by artists from around the world adorn the memorial. It lies along the banks of the river Spree, between the border of two popular neighborhoods, Friedrichshain and Kreuzberg. Not just an important place for Berlin, this is believed to be the largest and longest-lasting open air gallery in the world.

Last week, the shouts of "They're tearing down the Berlin Wall!" rang out again and this time 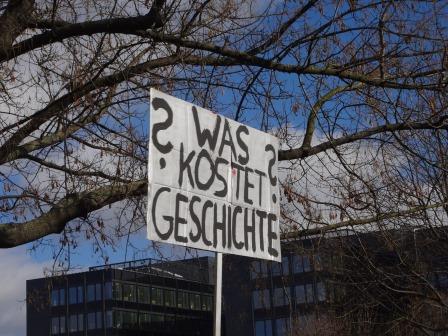 they were not met with joy. An announcement on Thursday (February 28th) alerted the public that Berlin developers were removing a 25-yard section of the wall for a 14-story luxury apartment block (Living Levels) and a new footbridge.

Word spread fast and on Friday 400 protesters formed a human chain preventing crews from accessing the site - but not before two slabs were removed. On Sunday, I joined a bigger demonstration as speakers and even some of the original artists delivered their thoughts on the importance of the wall and the need to retain it. As we listened and walked the wall once again, I was struck by the several missing pieces already taken out of the wall. There is an older opening with access the riverfront and a tourist shop. Further along, there is a much newer opening which lies directly in front of the 02 arena (a contentious site that fields attacks from anti-capitalist throughout the year). It appears the East Side Gallery has been under attack for much longer than since last Thursday.

No matter how much you know about a subject, there is so much more to know. There are many intricacies of development in Berlin that I don't fully grasp. Having arrived in the city in 2007, I often feel I am not enough a part of Berlin to take place in such important debates. It's a bit like being a kid at the dinner table with your own thoughts and ideas, but not sure if you should speak up while the grown-ups are talking. Are we being too precious? What does Berlin need to do to continue to develop? How do we adequately protect landmarks?

I don't have the answers, but as I continue to learn and love in the city, I think I am up for being part of the debate. Or at least a protest.

UPDATE: The Local reports that David Hasselhof, the Hoff, is to rock Berlin Wall protests on March 17th at 2pm.

I'll be there. And if it is half as awesome as this 1989 Interview& concert, we're all in for a good time.

Developer removes segments of Berlin Wall at East Side Gallery