From Calgary to Bangkok: The Facetious Farang 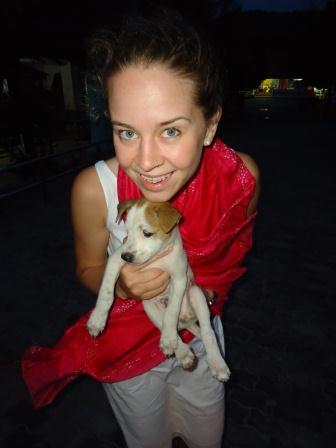 My name is Ruth, and I blog at The Facetious Farang. I’m from Calgary in Western Canada, and I currently live waaay out in the suburbs of steamy Bangkok, Thailand.

1. Why did you move abroad?
My husband and I both love travelling, and we’d always wanted to live abroad. When I was finishing my master’s thesis, we made a deal: once I graduated, we’d move to the first country that offered one of us a decent job. As graduation loomed, I was still trying to figure out what I wanted to do with my life, while he had a career as a high school teacher. Needless to say, he got the job offer, and here we are in Thailand.

2. How do you make a living?
I did a bit of soul searching once we moved to Bangkok, and decided to pursue a freelance writing career. Navigating the Bangkok writing world has been a strange and interesting journey, but the longer I pursue it, the more opportunities I receive. I write for a local expat publication, edit advertisements for non-Native English speaking clients, blog, and contribute to travel forums. In addition to this, I also substitute teach and tutor at my husband’s international school – I enjoy the students and the flexibility, and it provides some extra cash.

3. How often do you communicate with home and how?
I *try* to phone both sets of parents once a week, but it doesn’t always happen! I speak with close friends less often – once a month is more typical. I use email and facebook every day – they’re nice for quick check-ins. I’ve found that maintaining a blog is helpful: I don’t have to repeat the same stories multiple times. Hmmm… that sounds a little anti-social! When you’re trying to stay in touch with people at home and also spend time with friends in your new home, though, it doesn’t hurt to streamline things a little!

4. What's your favorite thing about being an expat in Thailand?
The food! I confess that I am an enthusiastic eater, and Thailand does so many culinary things so well. I’m ashamed to even contemplate the sheer volume of coconut cream that I’ve consumed since we moved here, but it must be in the gallons. When I’m maxed out on coconut/MSG/sugar, it’s easy to shop at local markets, or grab Som Tam or a smoothie. You really can’t go wrong.

I also appreciate the gentleness of the Thai people. While the high value on non-confrontation can be frustrating at times, it also makes for a relaxing environment. Many Thais on our street have been really kind to us, even sharing meals out of their own bowls (maybe that’s a little too kind). I know that they also laugh at us, but if I were them, I probably would, too!

5. What’s the worst thing about being an expat in Thailand?
I find the language barrier to be really difficult. I have studied a bit of Thai, and I’m trying to learn more, but at this point, it only goes so far. When my husband and I do practice Thai, sometimes we’re understood, and sometimes… not so much. It can be a bit of a blow to the ol’ self-esteem! Perhaps it is because we are in the suburbs, but English is pretty rare. Whenever we find an English-speaking taxi driver, we feel like we’ve hit the jackpot.

6. What do you miss most?
I miss my friends and family, but if I’m honest, I think I miss the mountains, cold weather, and actual seasons the most. I know that Thailand’s climate sounds like paradise to many people, but I struggle with the heat.  In winter, it’s not too bad, but it gets brutally hot in the summer, and spending time outside can be unpleasant. In Canada, I spent a lot of time skiing and hiking in the mountains, and just generally being outside. I can’t say that I miss snow in May, though!

7. What did you do to meet people and integrate in your new home?
We were fortunate, because my husband started work at the same time as a big group of new teachers. We all live in school housing this year, so we are surrounded by friends. It’s definitely made the transition easier. We also joined an international church near our neighbourhood, which has been a good place to meet people from all over the world.

8. What custom/ habits do you find most strange about your adopted culture?
I find it strange that many stores and food joints can have so many employees that seem to do nothing. I have gone to fast food outlets like Auntie Anne’s pretzels, and waited for ages for my order to be ready while 5 employees just sort of hovered awkwardly, doing nothing. And this is by no means an isolated incident!

9. What is a myth about your adopted country?
A myth is that Thai food is healthy! I know that I just raved about it, but a lot of Thai cooking contains loads of sugar, MSG, salt, and fat – hardly a recipe for good health. That being said, with certain modifications, it is certainly possible to make healthy Thai food: just don’t assume that restaurants are churning out low-calorie, wholesome dishes.

10. Is the cost of living higher or lower than the last country you lived in and how has that made a difference in your life?
The cost of living in Thailand is much lower than it is in Canada. However, our salaries are also lower than they were at home. This combination has led to some differences in our lifestyle. Eating in restaurants is fairly cheap, and we go out more often than we did at home. Transportation can be pricey, however – we had a car at home, but we chose not to take on that expense here. Our priorities have also shifted. Because we’re so close to so many fascinating places, travel has become more of a priority than it was when we lived in Canada, and so more of our budget is channeled in that direction. At the same time, though, we aren’t spending money on outdoor pursuits like we did in Canada, so it evens out.

11. What advice would you give other expats?
Find a community of friends as soon as you can. I was lucky in that I had a bit of a readymade community to get involved in, but if I didn’t have that, I would get involved in one of the many, MANY clubs and activities that this city offers. Nothing makes a place feel like home like having friends.

I would also recommend embracing the local culture as much as possible. Expat-ing can feel pretty isolating at times, and it can be really helpful to make yourself get out and sample the food, culture, traditions, and street life that your new home has to offer. And remember that culture shock doesn’t last forever! 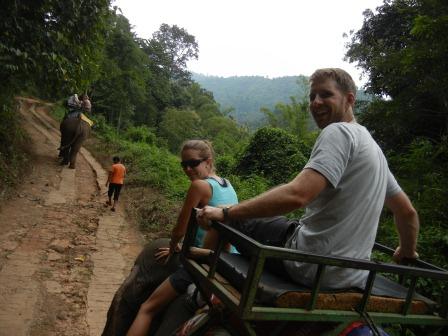 I started my blog when we moved to Thailand. I’d followed several blogs for years, and felt like I was ready to take a shot at writing my own. It’s a great way to keep friends and family updated, and I’ve met some cool new people through it. It’s also an opportunity for me to crack jokes and remember the humourous side of expat life.

More articles
EU: Finally a common approach on travel restrictions
EU countries have agreed on a coordinated approach to travel measures and developed common criteria for mapping risks. ...
British citizens status in EU countries after Brexit
How do Brits living in Europe apply for their resident status after Brexit? What is a constitutive Brexit policy and a ...
Theatre in the time of coronavirus
While it has turned our society upside down, the new coronavirus also changes the rules on stage. Theatre directors ...