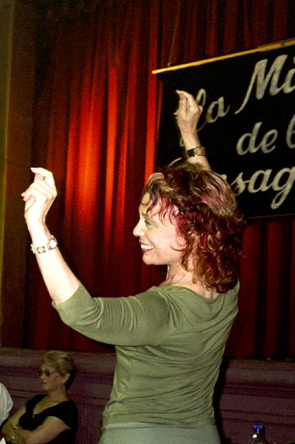 My name is Cherie Magnus, but most folks on the internet know me as tangocherie for my blog. Born and raised in Los Angeles, California, I left there in 2001 to live in Mexico, and then in 2003 I moved to Buenos Aires, Argentina, with Phoebe the expat cat. In January 2012, I published my first book, The Church of Tango: a Memoir—Death, Dance, Destiny.

1. Why did you move abroad?
I had a series of losses in my life beginning with the death of my beloved husband from cancer. More loss followed including the family home, my mother to Alzheimer’s, and my own two cancers. I had to take early retirement from my job as a dance reference librarian in the Los Angeles Public Library. Then money was an issue and so I moved to Mexico where I thought life would be cheaper. I also took it as an opportunity to live in a foreign culture and learn a new language. But I was a tango dancer and so I was drawn to Buenos Aires, the Mecca of tango that I had occasionally visited since I began dancing tango in 1997. In 2001 Argentina suffered an economic crisis and it was very inexpensive. Since then things changed and inflation has skyrocketed—something that most expats don’t think about when they make the decision to leave home for greener foreign fields.

2. How do you make a living? Are you a fulltime writer?
Luckily I receive a small pension, and I am able to make ends meet (most months) by teaching tango with my Argentine partner, Ruben Aybar, who is my life partner as well. After we were high-ranking finalists in the Buenos Aires Tango Championships of 2006, we were asked to teach, and now we have students from all over the world. We have nothing but fantastic reviews on Trip Advisor, which help new students to find us.

I do receive royalties from my book, The Church of Tango: a Memoir, but because it’s in English and I live so far from the English speaking and reading world, it’s very difficult to market it. Last April, however, I did do a reading/signing as a guest of the U.S. Embassy at the International Book Fair of Buenos Aires. And when I visited Los Angeles in May, I did some local readings and signings at libraries, tango dances, and book stores.


3. How did you start the process of writing a book and get it published? Did you go to a publisher? Self-publish?
I’ve always been a writer, mostly of critical essays and reviews as well as travel articles. I was the dance critic for a local newspaper in Los Angeles, and of course I wrote book reviews as part of my job as a librarian. I wrote an unpublished book, Coffee Shop Dreams in the 80s.

When I began my journey of survival in 1992, I started to write about it as an outlet. When more dramatic events kept happening in my life, I realized I was writing a book. I queried several agents with no result. Because of my age and the fact of having had bad health, I thought realistically that if I ever wanted to see this thing in print, I had better do something about it myself because life is short.

Because I have friends who self-published and recommended the process, I investigated some companies in 2011 and went with CreateSpace because it was the least expensive with no up-front money and because it’s affiliated with Amazon. I paid a graphic designer to design the cover and the book, and a professional editor. I did the proofreading myself (not recommended; I nearly went blind!) The quality of the resulting paperback is just perfect.

4. How long did it to take from conception to publication?
From 1992 to 2012—ten years. When I finished writing it, it was more than twice as long; I cut out more than I left in.

5. What was the hardest part of taking your writing to a book format? Did you blog before writing your book?
Controlling the release of information as the story unfolds and getting the pace just right. I had a hard time figuring out when to proceed chronologically and when to use flashbacks to sustain drama.

I’ve been writing the tangocherie blog since 2006, but it has very little to do with my book.

6. What is your perception of the expat book market? Has it changed throughout the process?
When I began writing my story and knew I wanted to publish a book, the “expat” books I read were all commercial and professionally published, most of them being travel narratives. I read Tony Cohan’s On Mexican Time, In Tuscany by Frances Mayes, A Thousand Days in Tuscany by Marlena de Blasi, and Peter Mayles’s wonderfully droll books on living in Provence. Naturally I read Elizabeth Gilbert’s Eat, Pray, Love but it just made me angry that the writer seemed so spoiled and self-centered.

I wanted to show that one doesn’t have to give up when a tragedy, or in my case several tragedies, knock you down. I had read too many stories of “my life is over because my husband died,” or “my life is over because I have cancer.” I was lucky because dancing helped me, but we all have to find something that will help us to survive. And I hoped I could encourage other people to strive on.

7. What is your favorite part of the book?
I enjoyed writing the beginning--my discovery of Paris and love, writing about the milongas of Buenos Aires, and the chapter, The Key, in which I view my old house at night where new owners live, and imagine that my happy old life still exists there inside the glowing windows.

8. What was the most difficult part to write?
I had more or less completed the writing, but felt more information regarding my mother’s illness and decline had to be included. I am an only child and was very close to my mother. But writing about her dementia and caring for her made me relive the suffering and pain all over again. I cried the whole time I wrote about it.

9. What advice would you give to other expats that want to write a book?
Do it! Just don’t expect that the world is waiting for your book. The satisfaction is in the process.

10. What are you working on now? Do you have plans to publish another book?
Now I’m working on the prequel to The Church of Tango: a Memoir—working title, Barefoot Ballerina. It takes place from 1960-1963 when I was a Dance Major at UCLA and before the world changed irrevocably.

I’ve had many requests to write a sequel about my life in Buenos Aires since the end of the memoir, but at this time I don’t plan to. The journey is always more interesting. But you never know! 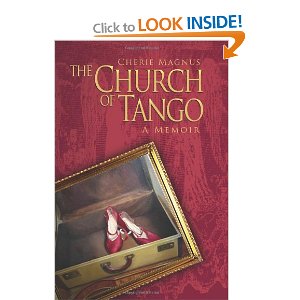 Cherie Magnus's memoir, The Church of Tango, is a story of tragedy and adventure, lust and music, romance and tango, and above all, survival. A dancer all her life, she’d had to put it on hold while raising her artistic sons and caring for her dying husband. Now as she set her suitcase down on the ancient cobblestones of a Paris courtyard, she wondered—48 years old, 6,000 miles away from home, knowing no one—what was she doing? Each time disaster strikes her life, Cherie forges ahead, struggling to save herself from the wreckage by listening to the music and dancing, first in Los Angeles, then France, Mexico, Holland, and finally in the tango salons of Buenos Aires.

More articles
What can expats expect in 2021?
The year 2020 has been a challenging one to say the least. Consequences of all the lockdowns and job losses will have ...
Happy New Year 2021!
All the team (editors, moderators, networkers) wish you a much better year 2021 than the past one and we look forward to ...
Merry Christmas & Happy New Year
Whatever are the circumstances this year, we are wishing you all joy and health (especially health as joy might be a bit ...
A new start for 2021: living in Martinique!
A surprising island with its Edenic beaches surrounded by white and black sand, blue or green water, good weather, ...