From Florida to the south of England: Running Across the Pond 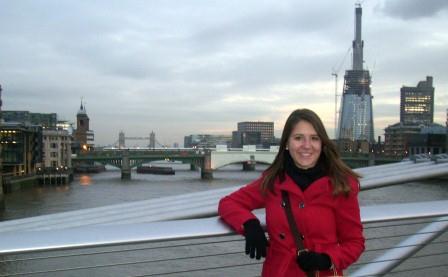 I’m Taylor, a native Floridian now living in the south of England!

1. Why did you move abroad?
I moved because I fell in love with a wonderful man with an English accent and now we’re getting married! After over 3 years of a transatlantic relationship, I finally moved across the pond.
2. How do you make a living?
Right now, I don’t work. Under the terms of my visa, I can’t legally work until we’re married! (Less than a month to go!) I knew before moving that I would be unemployed here for a few months so I was able to prepare a bit. It’s still hard though; I enjoy working and want to utilize my degree!

3. How often do you communicate with home and how?
The internet is seriously an amazing thing! I can usually speak to my friends and family whenever I want through Skype, Whatsapp, or Facebook. Sometimes it doesn’t even feel like I’m on another continent because I talk to them so frequently! Except for when they tell me that I’ve woken them up at 4 in the morning accidentally. Oops!

4. What's your favorite thing about being an expat in England?
Just being in England is my favorite part! Even though I’m American, I always felt British at heart. I always dreamed of living in England one day ever since I was a child. I didn’t even have a substantial reason for loving the sites of England; I just knew one day I had to move there. So now I can literally say my dreams have come true!

5. What’s the worst thing about being an expat in England?
The not knowing when I’m going to see friends or family again is the worst. Saying goodbye to everyone was terrible. I would just burst out crying out of nowhere with the anticipation of saying goodbye to them. I’m fine now and honestly can’t imagine living anywhere else! But feeling distant from my friends and family in America is still hard.

6. What do you miss most?
I miss a lot of things actually, but probably not what you’d expect! Of course I miss my friends and family so much, but I went to university 7 hours away from home and traveled a lot, so I’m used to missing them!

I miss random things about America the most, like free refills! I would give anything to have free refills all the time again. I miss familiarity; I probably spend 3 times as long in stores because I don’t know where anything is. I always say “if I was just in Target I would know exactly where it was!” That’s another thing I miss more than anything: Target. There is no store in England that compares to Target! And frozen yogurt shops. Frozen yogurt hasn’t really caught on here like it has in America. Actually, I could probably go on forever about little things that I miss!

7. What did you do to meet people and integrate in your new home?
I joined a running club! It was the best thing I ever did (well, besides move here!) It gives me something of my own to do. It makes me feel more normal knowing that I’m making friends without relying on my Fiancé or his family.

8. What custom/habits do you find most strange about your adopted culture?
Obviously I think a lot of things are strange… Driving on the other side of the road, the reliance of tea, and how houses don’t have air conditioning (that still just blows my mind! Don’t forget, I’m a Floridian) just to name a few! But “Guy Fawkes Night” is definitely a strange celebration for me. The 5th of November is called “Fireworks Night” or “Guy Fawkes Night”. It’s about burning Guy Fawkes for what he did in the 17th century. I learned this past year about how kids make their own Guy Fawkes from old clothes, ask “penny for the Guy?” so that people give them spare change for sweets and stuff, and then at the end of the night they set it on fire!  Hearing about that just made me laugh! I think that’s the weirdest tradition I’ve seen so far.

10. Is the cost of living higher or lower than the last country you lived in and how has that made a difference in your life?
Much higher! I already have my list of things I’m going to buy next time I’m in America because it’s significantly cheaper! Most of the time I just put up with it because there’s nothing I can do about it. The biggest difference it’s made in my life is in what I eat. Things that are cheap and plentiful in Florida, such as fruit, are expensive and poorer quality here.

11. What advice would you give other expats?
My favorite phrase is “jump in with both feet”. A friend told me that a few months before I left when I was stressing about money, leaving, and getting my family’s approval on my big move. Becoming an expat may seem overwhelming at first. But more often than not I get told how incredibly lucky I am for getting to experience another country! So my advice: jump in with both feet and do everything wholeheartedly.

12. When and why did you start your blog?
I started my blog “Running Across the Pond” in the summer of 2012 when I was awaiting the approval of my UK visa. My number one reason for writing is that I want to be able to help others trying to make their way to England. I know how it feels to be helpless and confused trying to look at options for moving. So if I can make the process easier for just one other person, I’ve done my job!

Taylor's blog, Running Across the Pond