From Florida to England to Kuwait: Educated Abroad 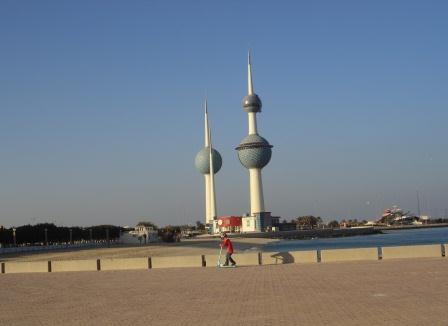 My name is Gary and I’m originally from the Great State of Florida. I’ve been married for 15 years to a wonderful German lady named Alex.  My wife and I have one son, Christopher, who will shortly turn seven.  Some of the cities we’ve called home are: Serbia, USA, Canada, Germany, Luxembourg and England.  We currently live in Kuwait City, Kuwait.

1. Why did you move abroad?
How we ended up in Kuwait has more to do with my wife’s profession than anything else.  Because of her job, a Foreign Service Diplomat, our family moves regularly and quite frequently; on average every two to four years, depending on the needs of my wife’s government.  Prior to Kuwait City, we were posted to London, England for four years.

2. How do you make a living?
For the past seven years, I’ve been a full-time, Stay-at-Home-Father, a role that I truly enjoy.  My wife is the main income earner for our family.  Depending on the rules and regulations of our host country, I’m able to volunteer my time and skills with many local organizations.  For example, in Canada, I volunteered at a community police center at local police station.  In London, I ran a Neighborhood Watch in our local community.  I also volunteered a considerable amount of time at the same school my son attended in London, reading with his classmates once per week.

3. How often do you communicate with home and how?
We’re constantly in contact with both our families and loved ones back in Europe and America.  Email is the main source of communication.  We occasionally phone one another but this method can be extremely expensive.  While Skype is publicly forbidden here in Kuwait, most people do use it.  Kuwait does have functioning mail system.  However, it’s unreliable and painstakingly slow.  Very few people use it.  On the two rare occasions that I did use the Kuwaiti Post to send a letter back home, my letter arrived one month later.  FedEx and DHL are available here in Kuwait, but at a hefty price, depending on what it is you want to send, and where you’re sending package to.

4. What’s your favourite thing about being an expat in Kuwait?
This is an easy question to answer.  Cheap gas!  Most people drive large, bulky, gas-guzzling SUV’s, of the American type.  You can easily fill up your tank for under $15. Once per week, I fill up our 4-cyclinder SUV for @2.5KD (Kuwaiti Dinars).  That’s the equivalent of paying @$12 for 15 gallons of gasoline.  There’s no tax on fuel and gas is on par with water, milk and most food items.    Needless to say, gas is plentiful and extremely cheap.

5. What’s the worst thing about being an expat in Kuwait?
The worst thing about being an expat in Kuwait is not being able to walk into a grocery store and purchase pork products.  Kuwait and most surrounding countries are all “Pork Free”.  Your meat selection in Kuwait is limited to chicken, beef and fish.  Beef bacon tastes awful! However, one can easily jump on a flight to Dubai, U.A.E A. and visit a well know store called Spinneys.  Located in the very back and usually covered by a curtain is the pork products section for expats.  Or, if you know someone who works on the US military base here, you can get yourself some good ol’ “fatback”.

6. What do you miss the most?
I miss quite a few things from back home.  But the one thing I miss the most is good, quality cable television.  OSN is the satellite cable subscriber we, and most other expats, are forced to signup with.   OSN programming is poor and in need of a major overhaul, not to mention the amount of money one pays per month for American style programming that’s several seasons behind what’s being shown in USA.  Many expats use what’s known as a “Sling Box”.

7. What did you do to meet people and integrate in your new home?
Like any new posting, getting out and meeting new people can be a challenge.  Through my wife’s job, we’ve met many interesting and exciting people, from all walks of life.  On a professionally basis, I’ve met many Ambassadors from all over the world.  For example, I’ve personally met the French, German (obviously), Belgian, Polish, Czech, Austrian, Spanish, Hungarian, Brazilian, Japanese, Korean, Thai, Indonesian,  the Deputy Chief of Mission for the Russian Federation, British, American and loads of envoys from Africa and the Caribbean.  I’ve even exchanged pleasantries with the Cuban Ambassador, who invited me to come and visit his country.  I politely declined.  I have seen officials from North Korea running around, but haven’t had an opportunity to meet anyone from that country just yet.  It’s part of my bucket list of people and places!

Outside of the diplomatic venue, I’ve met many people from countries in this region and from back in The USA.  Lots of Americans live in Kuwait, and not all of them are military.  Most of the people I’ve come in contact with have been through my son’s school.  Although predominantly British, our school is a melting pot of cultures from all over the world like, Indian, Pakistani, Syrian, Iranian, American, Canadian, British, Australian, New Zealander, and all points in between.  Networking is the key to meeting people in Kuwait.

8. What customs/habits do you find most strange about your adopted culture?
While I have the utmost respect for all religions, I particularly dislike being in Kuwait during the Holy Month of Ramadan.  Ramadan is the one time of the year when, life basically comes to an abrupt halt here in Kuwait. Once per year, Muslims fast for a period of one month.  From sunrise to sunset, all Muslims abstain from eating and drinking.

It’s during this time of the year that, all restaurants, cafes, and eating establishments (with the exception of grocery stores) are closed during daylight hours.  Eating and drinking in public is against the law and people can be arrested, fined or imprisoned for doing so.

Major stores and shopping malls are open, but few people frequent them as most people are at home sleeping.  Most people turn their lives around for thirty days, eating late into the night and sleeping most of the day.  It is a bit strange.   Lots of expats vacate the country during Ramada to avoid having to comply with these rules.

9. What is a myth about your country?
Personally, I don’t know of any myths concerning Kuwait.  But I will say that Kuwait is a very safe, and for the moment, a stable country.  Of all the countries in this region, it is the only one with an elected Parliament.  Kuwaitis are friendly, hospitably people.

10. Is the cost of living higher or lower than the last country you lived in and how has that made a difference in your life?
London is far more expensive than Kuwait.  Overall, we pay a little less for most necessities here in Kuwait, especially gas!

12. When and why did you start your blog?
I started my blog, www.educatedabroad.blogspot.com, when my son began formal schooling back in London.  It is a personal journal of my son’s educational experiences, peppered with my own personal thoughts and analysis of what it’s like being the parent of a child educated abroad.