From New York City to the South of France: Blaxpat and Loving It 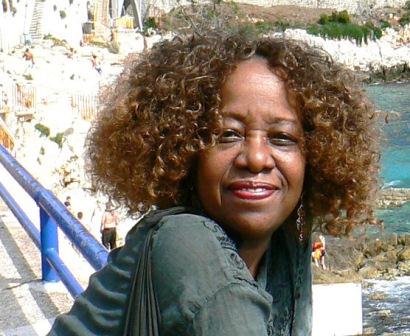 My name is Delorys Welch-Tyson.  I was born, home grown and educated in the “Big Apple (New York City)”.  I’ve lived in other parts of the United States as well: Missouri, Pennsylvania, New Jersey and Connecticut.

For the past 14 years my husband and I have been living in the South of France.

1. Why did you move abroad?
It just seemed logical.  You see…many years ago (I won’t tell you how many), I took a simple one week vacation in Nice.  I instantly fell in love with the region and continued to come, for increasing lengths of time every year for over a decade.

When my husband retired, we decided to move here indefinitely.

2. How do you make a living?
I am a full time artist and writer. I am the author of 2 novels and working on the third. Prior to moving to France, I worked in corporate communications and later was publisher of a feminist newspaper . For a number of years, in addition to exhibiting my own artwork around the USA, I was owner of an art Gallery in New York City’s Tribeca neighborhood.  After travelling back an forth to France  for a number of years I decided to close the gallery and work full time on my art and writing...which can be done anywhere in the world.

3. How often do you communicate with home and how?
We communicate with home quite frequently.  We have had visitors, but not as often since 9/11.  So we basically keep in touch by telephone, and email.  Few people write letters anymore. I miss that intimate touch.  We travel to the States as often as possible.

4. What's your favorite thing about being an expat in France?
I love the laid back lifestyle of the South…such a relief from the dizzying pace of New York City.  I love French “politesse”.  I love the cuisine. I love the culture of South of France. Although we have travelled in the Caribbean and South America, the States is rather isolated in comparison to Europe.  We love the fact that we have been able to travel to the rest of the world with relative ease.  And it’s a lot cheaper from here.

5. What’s the worst thing about being an expat in France?
The demise of the US dollar.

6. What do you miss most?
I miss Greenwich Village.  SoHo.  Tribeca.  The Metropolitan Museum of Art.  The Museum of Modern Art.  Lincoln Center.  Windows on the World Restaurant at the World Trade Center…Whoops..I forgot.  It’s not there anymore!

I also miss, my family and my swaggeringly fabulous, gregarious and talented lady friends.

7. What did you do to meet people and integrate in your new home?
My social contacts revolve mainly around my artistic endeavors.

9. What is a myth about your adopted country?
I don’t pay attention to myths.  They tend to create unnecessary prejudices and confusion.

10. Is the cost of living higher or lower than the last country you lived in and how has that made a difference in your life?
Being from New York City, it seems that everywhere is cheaper than Manhattan!  Of course, now that the US dollar is worth “bupkis,” the cost of living in France is not all that different anymore.

11. What advice would you give other expats?
Learn the language of the country you’re living in. Read their newspapers, read their magazines and see their films and documentaries. Ask the natives of the country to interpret what you see and read.    Assert oneself to meet the natives and other expats.  Take myths and generalities with a grain of salt.  Don’t make assumptions;  just learn to ask the right questions of the right people.

12. When and why did you start your blog?
My blog contains idiosyncratic musings about my observations and thoughts concerning life as a foreigner abroad.  It’s what I call my “Blaxpat” blog, since it is a specific take on living abroad as a Black American “expat”.