From Indonesia to Scotland to Australia: Finally Woken 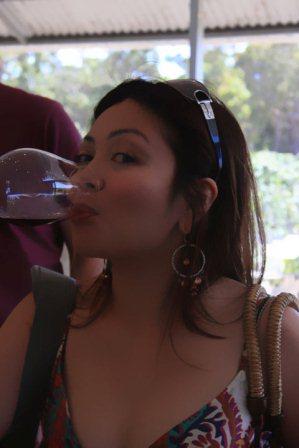 Anita McKay is a trailing spouse who loves traveling, food, cat, photography and architecture, although not necessarily in that particular order. Born and bred in Indonesia, she went to Sydney, Australia, to finish her master’s degree  – her first taste of being an expat – before going back to Indonesia to work. In 2007 she moved to Aberdeen, Scotland, got married, and settled there for more than 2 years. Just right at the time when she started to understand the Scottish accents, she and her husband had to move again to the most isolated city in the world. She’s been living in Perth, Australia, since November 2009 with her husband and Xander, their 1 year-old cat that’s also a known as the lizard hunter.

1. Why did you move abroad?
I met my then-boyfriend when both of us were working in Indonesia. After 3 years he decided to take a job back in Aberdeen, Scotland, and asked me to move with him. It took me a year before I decided to leave Indonesia and move to Scotland.

2. How do you make a living?
In Indonesia I worked at a property consultancy firm for 5 years, then moved to work at the biggest cosmetics company in the world in their HQ in Jakarta. I had to resign to move abroad because they don’t have an office Aberdeen. They would’ve offered me a position if I considered moving to London though. After a long discussion with my husband, I decided not to work while we’re in Scotland and enjoyed a long break. After we moved to Australia, I took a job that brought me back to Indonesia and I had to commute between Perth and Jakarta every month. The project was finished last December and early this year I moved back again to Perth permanently. Right now I’m enjoying being a lady of leisure!

3. How often do you communicate with home and how?
Very often! Indonesians are obsessed with their mobiles so I keep in touch with friends and family mainly by text or blackberry messages or whatsapp. They prefer that rather than talking on the phone. Sometimes I do facetime or skype with my friends who live elsewhere. My parents however, do ‘old school’, normal communication, which is talking through a landline phone.

4. What's your favorite thing about being an expat in Perth?
Because I’m from Indonesia, I’m delighted that Perth has a lot of Asian shops and Asian restaurants, good ones as well. Plus there are a lot of Indonesian ladies selling home-made food so I never feel homesick. And since Perth is geographically very close to Indonesia, many restaurants have Indonesian food influence, and sometimes they just write a menu that is Indonesian without translation, like nasi goreng (fried rice) or sambal (chili paste) and assume everyone understands it. Also the furniture industry is heavily influenced by Asian culture so I get to decorate my house in Asian style. We can’t afford to do that back in Scotland because a piece of wooden dining table will cost thousands of pounds!

5. What’s the worst thing about being an expat in Perth?
In my post ‘Hello from Down Under (2) – The First Shocking Moment’ I wrote about how everything is so horrendously expensive here. Even now the price still shocks us.

For example, weekly groceries will cost me about 100-200 dollars and there are only two of us plus a cat! Broadband internet and cable TV cost us about 100 bucks a month for 100 GB limit, while we had only to pay about £30.00 back in Scotland, and it was unlimited!

Perth is also bloody far from everywhere and it cost a lot to travel. I still don’t understand why my friends and family can pay only £800 to fly from UK/EU to Australia, while I have to pay $2500 to travel there?

6. What do you miss most?
Perth can be rather ‘sleepy’ so I miss the party lifestyle in Jakarta, Indonesia.

And since Australia is rather ‘new’, I miss the historical landmarks and culture that Europe can offer. I still think it’s funny how the oldest winery in Western Australia was built in 1967, only 45 years a go!

I also miss the beautiful scenery and colourful fat roses from Scotland. Western Australia is all about bush land, and I still cannot find how one bush is different from another. They’re just yellow grass and full of dangerous creatures!

7. What did you do to meet people and integrate in your new home?
There are so many Indonesians here, it took me less than 2 months to have hundreds of friends. Being expat means everyone will know someone who lives in your new home and they will get their friends to contact you and introduce you to their friends.

8. What custom/ habits do you find most strange about your adopted culture?
In Things About Perthians I wonder why Perthians really like going barefoot not just on the beach but practically everywhere. I saw people – adults and kids – walking to petrol stations, government offices, even supermarket, with no footwear on and their feet are black as night and no one cares. It’s normal, it’s natural. You do that in Indonesia and everyone will stare at you and think you have some mental problem.

Perthian men are also obsessed with tank tops/vest. There’s a tank top they normally wear after they went to Bali (Indonesia) for holiday. The vest is normally white but very thin and made from a cheap fabric, with the beer logo at the front. My husband has been threatening to wear it. So far I’ve managed to veto it.

If wearing tank top is bad enough, being topless is a different class altogether. Summer is just around the corner so I’d get to see more people driving their cars around with no shirts on - but they’d wear their hats though.

9. What is a myth about your adopted country?
The image of Aussies spending their life on the beach under the sun does not apply to all. In fact, many Australians now suffer from vitamin D deficiency – including me!

Also don’t believe that Australia is always hot! Winter can be quite cold, and in my post ‘First Winter in Perth’ I wrote about how shocking it was for me to find out that the temperature can drop to 0 C and the house doesn’t have thick walls like in UK so we had to go buy a heater!

10. Is the cost of living higher or lower than the last country you lived in and how has that made a difference in your life?
Alredy answered it on point 5.

11. What advice would you give other expats?
In order to survive in Australia, you need to embrace Aussie’s laid-back lifestyle (see point. 8), learn to master a BBQ technique, and try to understand the AFL game!

12. When and why did you start your blog?
I started my blog in April 2005 and initially it was more about relationships with boyfriends and friends in general. When I moved to Scotland, I dealt with culture shock all the time and started writing more about my experience settling down in my new adopted home. The blog since has evolved to be an expat blog which covers culture, travel and a bit of my life.