Just in time for the opening of the German Christmas markets and the first advent, the Telegraph put out an article sure to dampen some holiday cheer.

The core of the problem is that, with the exception of the “real” Christkindlmarkt in Nuremberg and a few other traditional ones like it, the Christmas markets elsewhere in Germany are no more an authentic local feature than the ones in the UK: they’re just money-making machines. 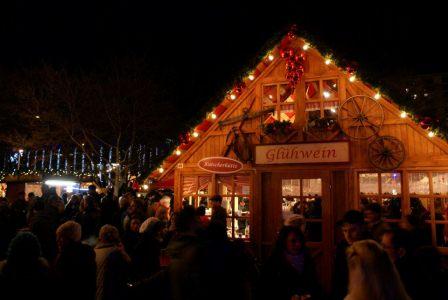 Ah, that old chestnut (pun intended). Holidays and the ways we choose to celebrate them are often under attack. Christmas, with its religious overtones and rampant commercialism, is often accused of being the worst offender. The act of moving abroad can highlight these issues in looking at a new culture's traditions, and examining your own with heightened scrutiny.

When we first moved to Berlin, the city was descending into the dead of winter.  As each day grew ever colder and darker, we glared at each other, wondering "whose stupid idea it was to move here anyways".

And then the Christmas markets opened. We had heard that Berlin's markets were hardly something special compared to the rest of the country, but as Christmas market virgins we found that hard to believe as the squares transformed to beautiful mini marketplaces. Little alpine huts appeared serving glühwein (mulled wine), bizarre trinkets, and holiday cheer. Some of the gloom vanished in the neon lights and the encroaching homesickness ebbed.

Austria, South Tyrol and Alsace, but are now held in many countries around the world. An American friend in Beijing told us he had visited the German Christmas markets at the German embassy just last weekend. As a former expat in Germany, it gave him a little taste of his former home. While many markets take on the character of the city they are in, most stay true to their German roots.

We found this out on our first vacation as expats. Finding inexpensive flights to London in December, we left the land of bratwurst for the island of bangers and promptly fell in love with all things British. Seeing a sign for a Christmas market, we were curious to discover what an English Christmas market had to offer. We arrived...and blinked. It was just like a German market, from the Gebrannte Mandeln (candied, toasted almonds) to the glühwein.

We have since been surprised that many things we considered to be quintessential American traditions are actually borrowed directly from the Germans.

As December 1st rolled around, it once again made perfect sense to collaborate with other expats and Germans in a meshing of our two cultures.

A Christmas pub crawl was in order. 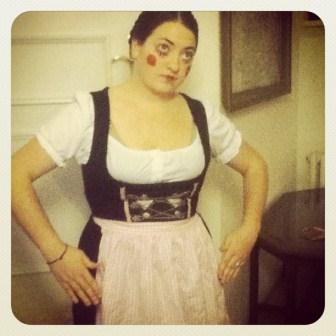 A rowdy group of Americans, German, French gathered at a Weihnachtsmarkt to share traditions and holiday humor. To enliven the meet-up, we encouraged costumes (or fancy dress as we found the English called it). We had a hunter and a bulls-eye wearing reindeer. We had a Santa suit. We had a 80s ski bum. We had a truly impressive Christmas tree hairdo with lights that actually lit. After some serious brainstorming, we also had my costume - a German wind-up doll. Have I mentioned I love to dress up?

As we rode the U-Bahn to the square, we encountered an intensified German stare. Germans are known for their directness and this sometimes translates to a relentless gaze which can be extremely awkward to American and English sensibilities. For once, I enjoyed the stares and the outright friendliness of people who laughed and joked with us, pulling us into their group pictures. More than anything, this was a German Christmas miracle. 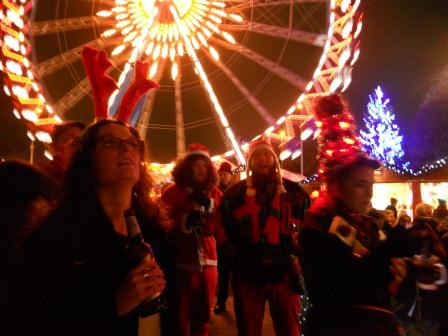 The whole night filled me with Christmas wonder. The fact that we had been able to begin life anew as expats with such fabulous and fascinating friends sometimes feels like a tiny miracle. I don't know for sure that it was the Weihnachtsmarkt that created this magic, but it certainly didn't hurt.

What do you think - are Christmas markets perfectly celebratory of the season or passé? What's your favorite Christmas tradition?