Thanksgiving in a Dive Bar in Berlin

Sometimes you have that moment where you think, "How did I get here?" 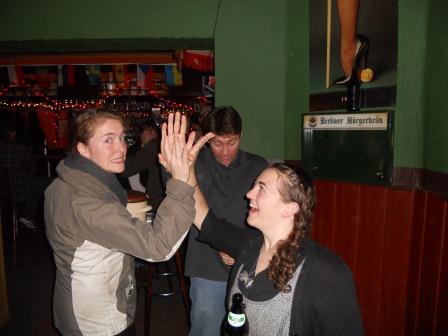 Last night, celebrating an expat Thanksgiving in our favorite dive bar in Berlin, was just such a moment. Thanksgiving is a family oriented holiday in the USA. What do you do when you've left your friends and family behind?

We've re-created the holiday abroad with a crazy collection of Americans, Germans, English and everything in between. Football (the American kind) brought a group of us expats together over 5 years ago and now we gather at the bar where we met for Thanksgiving, each of us bringing a favorite dish. Over time the event has grown to include friends and acquaintances, and even other expats we've only connected with online. I've chatted with fellow American expat in Germany, American in Wiesbaden, on Twitter and browsed her pins on Pinterest so when I heard she would be in Berlin for Thanksgiving, the sentiment of holiday demanded the more the merrier. Over (many) beers, mountains of food, and even a whole turkey, strangers became friends and the spirit of Thanksgiving was fulfilled.

One of the best things about holidays abroad is that you see it through fresh eyes. Holidays that you've been celebrating since you were born with a group of Americans look a lot different when celebrated with an international crowd. An egg salad with pickles made an appearance among the stuffing and mashed potatoes, as did vegan sausage, cheese and grape skewers, and a garden of pasta salads. At least we finished with cupcakes and pumpkin pie.

The best example of a displaced expat at Thanksgiving actually comes from my family's German foreign exchange student. When my husband and I repatriated to the USA the first time, my parents threw us for a loop by taking on an exchange student just before we got back. As we were returning to America without house or work, we planned on staying with them for an indeterminate period. And now there was going to be a German teenager living with us. We prepared for the worst.

We needn't have worried. Thomas was instantly part of the family and a great contrast to our experience as American expats in Germany. He helped preserve some of our language skills and understood what we were talking about when we bemoaned the lack of a good döner. We were uniquely prepared to explain some of the challenges of expat life, but some things happened that we simply didn't expect.

Thanksgiving that year was pretty low-key with just my parents, Thomas, and my husband and I. We went all out on food with the traditional fare of cranberries, green bean casserole, mashed potatoes & gravy, stuffing and a big fat turkey. As I put finishing touches on the table, my dad began to carve the turkey in the kitchen to put on a plate. Thomas was snapping pics and eagerly awaiting the star of the show - the turkey. With a flourish, my dad whisked in the platter of cut meat and Thomas's face fell.

"You didn't carve it at the table?"

We looked at him like he was crazy, and then we laughed. He had only experienced Thanksgiving through the stream of American holiday movies. Like a Norman Rockwell painting, he expected my dad to take a seat at the head of the table and carve the noble beast. We re-created the scene so he could take some shots for his family back home, then grabbed a little of everything and sat down to watch some football - celebrating Thanksgiving the real American way.

As the kick-off for the holiday season,