From Rome to Amsterdam: Famsterdam Life

My name is Fabio and I've been Italian for the past 31 years. I grew up in Rome, but with family in Tuscany and Abruzzo (the region opposite of Rome) I've been used to travel around from my childhood. I now live in Amsterdam, the Netherlands colorful capital.

1. Why did you move abroad?
My first experience of living abroad was in France in 2004 for my university studies. Once back home at the end of the semester, my thirst for adventure was stronger than ever. I rushed throug the rest of my uni program and immediately started looking for a job in the Netherlands.

2. How do you make a living?
I work as a software engineer in Amsterdam. I worked a number of years for a big corporate company, but lately I switched to a smaller but fast-growing startup—I guess it fits better with the general cuteness of country & city! Finding work here has been all but complicated. I reckon mine might be a privileged position, but in general there is definitely a lot more work here than in Southern Europe. I am seeing lately a lot more people from Spain, Greece or Italy moving here and filling important gaps. Lately I also started working in Dutch, which is maybe substracting to the Expat feel but definitely adds to the integration side!

3. How often do you communicate with home and how?
Not very often, maybe every couple of weeks. Our favorite method is still the phone: using a SIP compliant phone, my family is able to call me at local rates from Italy. We still prefer it to Skype! Other than that, it's a lot of occasional lines dropped in chat, but there's only so much you can tell to each other there.

4. What's your favorite thing about being an expat in the Netherlands?
How nicely the system works. It really feels a place that is governed to meet people's needs and improve their lives rather than those of the key-positions holder. From the bicycle revolution to the walfare to the accessibility of publicy sponsored services, I feel cuddled by the state. Many Dutch people complain, about many things, but that's only because they haven't grown up in a different place. I am actually happy to pay one of Europe's highest tax rates, because you see the benefits back.

5. What’s the worst thing about being an expat in the Netherlands?
The language and its associated humor! Tough to learn and difficult to use, all made even more difficult by the fact that everyone here speaks a very good English. But looking at things from another perspective, I guess that this side would be easily listed as reply to the previous question from a lot of newcomer expats :-)

6. What do you miss most?
A nice weather, nice customer service and obviously my family.

7. What did you do to meet people and integrate in your new home?
The important thing is to try to look around and join clubs, meeting, nights out, whatever takes your fancy. Closing up enjoying what you have is ok, especially if you're tired from hard work. But sometimes it is important to react, gather those last energies and hit the city, despite cold, rain and that inviting couch... The benefits won't take long to appear.

8. What custom/ habits do you find most strange about your adopted culture?
A lot more alcholoic drinking than what I was used to! It pops up in almost any pastime activity or gathering, and being not a big drinker I often feel quite some social pressure to go ahead and drink anyway.

9. What is a myth about your adopted country?
The Netherlands is worldwide famous for its drugs & prostitution attitude. Well, the myth is that it is a sinful land of corruption. In reality, the Dutch simply approached these problems for what they really are and tried to come up with valid compromises, which I think should be followed by the entire rest of the world. Just check the statistics about heavy drug abuse or sex slaves! Again, this system may not be perfect, but I guess it's realistically the best on the scene.

10. Is the cost of living higher or lower than the last country you lived in and how has that made a difference in your life?
The living costs are definitely higher, but more than adequately compensated by higher incomes than in Italy. If you then look further, you'll realize that there are many other factor that contribute to lower the daily expenses, for instance the use of bicycles. I can't quantify how much money I spared by saying goodbye to the car. Think buying proce, but also fuel, taxes, parking and mainteinance. All togeher, this allowed me to be financially independent from my family, save more and ultimately travel more.

11. What advice would you give other expats?
Try to look past the easy expat circle. I know it isn't easy nor comfortable, but it will reward you in a different way. 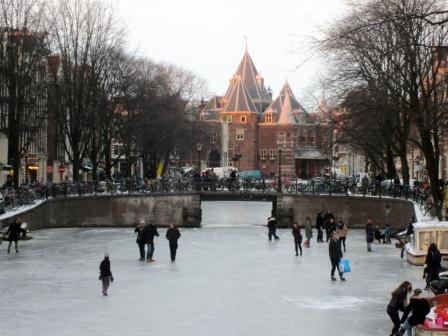 12. When and why did you start your blog?
I have always written a lot of stories about my life abroad, and sent them by email to my loved ones. At some point I realized that it might interest other people as well, so I went public. I have lost some “writing intimacy” in the process, but this way I can reach a wider crowd and be part of a different angle of the net.