From Atlanta to Madrid: Pass the Ham 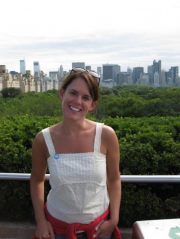 Hello there! So, I’m Hamatha (ok, Nicole) and I’m originally from Atlanta, Georgia. I moved to Madrid in 2006 and have been expatting it every since. (Does that sound a little dirty?)

When I finally found myself back in the USA, I finished my degree in Spanish and went on to get a post-graduate degree in Spanish-English translation. As soon as I finished my studies, I took the first job I could get although it had nothing to do with my degree. I had a good career in real estate for a few years, but always felt like I was wasting my time doing something I didn’t really love. As the years passed, Spain was always in the back of my mind and I often dreamt of going back for an extended period of time.

Then, one day, something very random happened that changed my life forever. My apartment building caught fire and burned down to the ground. It was a pretty horrible sight to see and I wasn’t able to recover anything from the damage. I was pretty bummed at first, but soon afterwards, I decided to buy a one-way ticket to Madrid instead of rebuilding a new life for myself in Atlanta. The fire was bad luck, but if anything, it gave me an out. Don’t get me wrong - it was absolutely terrible losing everything I had at the time, but it liberated me to do what I have always dreamt of doing. It’s amazing how free you feel when you have no possessions.

So, I took the big leap to Madrid in March of 2006. I’ve loved it from the day I landed and couldn’t be happier here.

2. How do you make a living?
When I first arrived to Madrid, I took a TEFL course and taught English during my first year living here. I quickly grew to hate it. I had some great students, but the truth is that I’m not a very good teacher and I never felt like I was making a difference. Thankfully, I started to make some contacts in some of the companies where I taught English and found that many of them needed translating services so, I began working on a few projects here and there. Those contacts led me to a job in SEO where I was doing copywriting and link-building for a few websites. I worked in SEO for quite a few years until I got laid off earlier this year. And just like the fire that led me to Madrid years earlier, a seemingly terrible experience led me to something better. After being laid off, I managed to find quite a bit of work as a freelance SEO, writer and translator and that’s where I am now.

3. How often do you communicate with home and how?
I’m kind of embarrassed to say that I don’t talk to my family as much as I should. I’m thankful to have Skype, but the truth is that seeing the faces of my family and friend and hearing their voices just makes me miss them more when we do video calls. So, I usually keep contact through emails and Facebook and we save Skype for special occasions like birthdays, holidays, and bail money requests.

Also, lately I’ve been meeting more and more expats and I like to compare notes with other people who’ve had similar experiences to mine. It’s always nice to see Madrid through other expat eyes.

5. What’s the worst thing about being an expat in Madrid?
I guess the worst thing about being an expat in Madrid is the language. I speak Spanish pretty well and can communicate comfortably with almost anyone. The thing is, though, that it’s hard to be your true self in another language. All of those little nuances of humor and sarcasm (the two things I enjoy the most) often don’t translate well. The people that are closest to me know me very well, but even after six years here and a high level of Spanish, I often feel as if people just aren’t quite getting what I’m trying to convey and that’s very frustrating for me.

6. What do you miss most?
La familia, of course! Besides missing my loved ones back in the states, I miss the availability of everything. America really does have everything. If you need it, you can almost always find it, no matter what it is. In Madrid, the choices are more limited. I guess you could say that it makes life simpler this way, but I still get irked if I can’t find exactly what I want in an instant.

7. What did you do to meet people and integrate in your new home?
When I first got to Madrid, I lived with a family and that living situation turned out to be crazy bad. After a few uncomfortable months there, I moved into an apartment with two Spanish roommates were also crazy, but a good type of crazy. We had a great time living together and I met a lot of their friends, which helped me feel like I was part of a crowd. Also, I really felt more integrated when I started to work in an office environment. When I was teaching English, I really didn’t have coworkers to talk to throughout the day, so I felt a little isolated.

Also, during my first year in Madrid, I met my now husband, who’s from Madrid. We met through a common friend and he helped guide me a little bit when I was still new to the city. Having someone native to help you out is always a good thing when living in a new city. It’s also nice because my in-laws are all kinds of awesome and they’ve made me feel right at home since the first day I met them.

All in all, I think the ability to be flexible and adaptable is the only way to put yourself out there when trying to meet new people. As an expat, you have to find a way to be open and outgoing, even if you’re not naturally extroverted.

8. What custom/ habits do you find most strange about your adopted culture?
I guess I get frustrated most of the time at a seemingly national reluctance to change, at all. A lot of times people have told me, “We don’t do that here in Spain.”  Most times it doesn’t even matter what it is, just the fact that whatever it is hasn’t been seen or done before means that it can’t be done here. I’ll never understand that mentality.

9. What is a myth about your adopted country?
Where should I start? Well, I guess the first one that comes to mind is that Spanish people are lazy. I really hadn’t heard that before I came here, but now that I’m living here, I guess I notice it more. Spanish people are not lazy. I think it may depend on where you live in Spain, but in the major cities, people work hard. Although they certainly like to have a good time and know how to enjoy life, the average Madrileño puts in a long work day. In fact, the working hours here are very, very long. Most people I know work from around 8.30 a.m. until 7:30 p.m. during the week. That’s an incredible long day.

10. Is the cost of living higher or lower than the last country you lived in and how has that made a difference in your life?
Yes, in most aspects, Madrid is more expensive than Atlanta, but its all relative. It just really depends on your lifestyle. Living expenses here are unreasonably high if you want a decent place without having to live with two or three roommates. But going out to eat can be relatively cheap and Madrid is such a sociable city with so many things to do that I find myself going out a lot more than I ever did in the states.

Also, it’s still pretty cheap to travel here if you’ve got the time. Spain is an incredible country and it’s still relatively budget friendly to travel through the different regions of the country.

11. What advice would you give other expats?
Well, I would say that life as an expat isn’t always easy, but the best way to get by is to do your best to meet people and really establish relationships wherever you are. One of the best things I’ve ever heard about expat life came from some movie, “It’s not enough to merely survive as an expat, you must thrive in your new environment.”  I think that about says it all.

12. When and why did you start your blog?
I can’t lie … I started it because there are so many cool blogs out there and I was jealous. I really wanted to create something just as cool. Unfortunately, I have realized that I’m way more goofy than cool, but that’s okay. Pass the Ham is a fun way for me to document some of the crazy things that have happened to me since I’ve lived here. I’ve never been one to keep a diary or a journal, but I started one when I came to Spain and I’m so glad I did. It’s always funny to go back and read some of my thoughts when I was learning my way around expat life. Writing about my time here also gives me perspective to see how much my life has changed in such a small period of time.